BIAFRA AND KANU: FORETELLING THE POSSIBLE END By Omoshola Deji 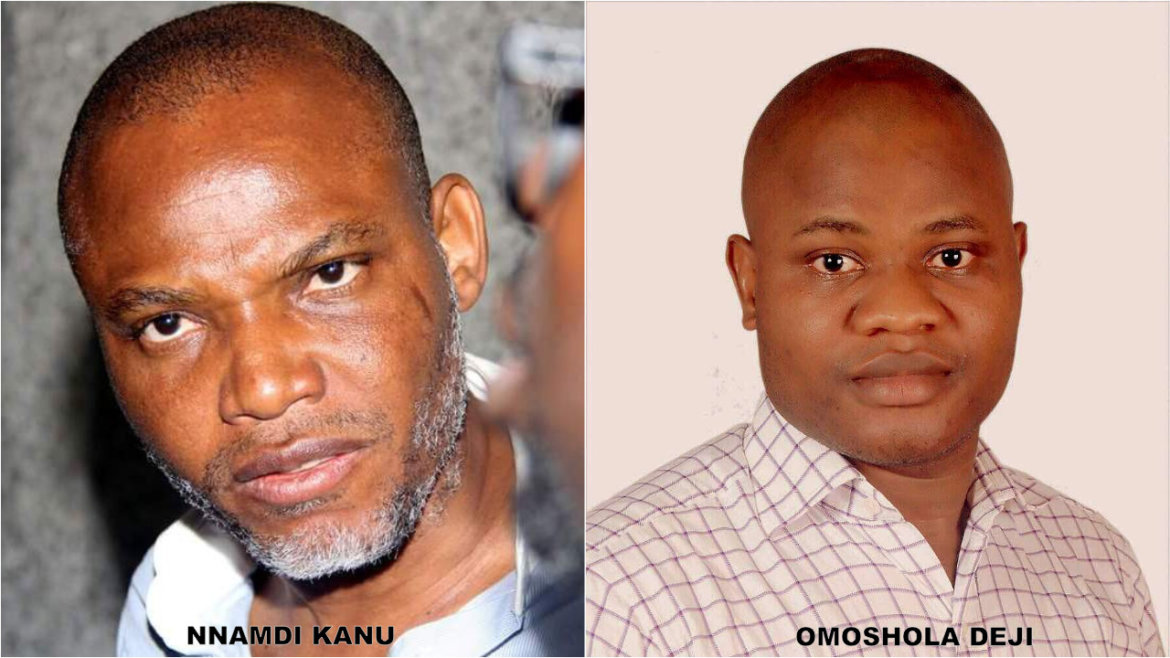 Nigerian ethnic groups are enduring the pains, rather than enjoying the gains of unity. From 1960 to date, successive governments, both the militarily imposed and the democratically elected, has declared Nigeria’s unity non-negotiable. Double-edged, the willingness to retain a united Nigeria is contrasted by the unwillingness to allow the nationalities negotiate their terms of cohabitation. This inflames the countrywide demand for political-economic restructuring and the quest for Biafra in Southeast, Nigeria.

Championing the immediate struggle for Biafra secession is Nnamdi Nwanekaenyi Kanu – the former director of the London-based Radio Biafra and recently dismissed leader of the proscribed secessionist movement – the Indigenous People of Biafra, IPOB.

The Nigerian military’s invasion of Kanu’s home and IPOB’s proscription as a terrorist group is generating controversy and anxiety in the polity. In any case, Kanu has only been declared missing, not dead. The mere speculations of death, without prove, cannot halt research and analysis on Kanu’s struggle for Biafra, it rather strengthens it.

This piece sets sights on foretelling how Kanu and the struggle for Biafra would ultimately end. A recount-before-analysis approach is adopted to cover the essentials and curtail ambiguity. The struggle of late minority rights activists and secessionist leaders is then examined to foretell the possible end of Kanu and Biafra.

For history, Odumegwu Ojukwu declared Eastern Nigeria a sovereign nation named the Republic of Biafra in 1967, battled the Nigerian army for three years and surrendered Biafra in 1970.

Kanu willfully assigned himself the duty of accomplishing Ojukwu’s failed mission. He crusades that Biafra restoration is the only solution to Southeast’s marginalization. In no time, Kanu’s popularity rose steeply and the drumbeat of secession resonated into President Muhammadu Buhari’s ears. The dictator turned democrat civilly wield the big stick! Kanu was arrested for treason and other related offenses on October 14, 2015. After prolonged detention without charge, the court ordered Kanu’s release on bail, but the state kept him in custody.

Buhari famed Kanu. The state’s willful disobedience of court order earned Kanu sympathy among the Southeasterners who largely grades Buhari as sectional and anti-Southeast. If Kanu was freed when he perfected his first bail conditions, he probably won’t have gained the kind of compassion that astoundingly transformed into support and discipleship in the Southeast.

After scores of protests and legal wrangle, Justice Binta Nyako, on April 25, 2017, granted Kanu a fresh bail on the key conditions that he must not be seen amidst a crowd of more than ten persons, must not grant interviews, hold or attend rallies. Kanu fearlessly dishonored the bail conditions and continued his advocacy for Biafra after he was freed. He called for referendum, but allegedly threatened war, berated other ethnic factions and purveyed hate.

Kanu rationalized his bail flout on emulating Buhari – the president who “does not obey court orders”. Fact checked, Buhari is still disobeying the order to release the former national security adviser, Sambo Dasuki, and the Shi’a Muslim cleric, Ibrahim El-Zakzaky. Reminiscent of a chain-smoker irritated by smoke, the same Buhari government that dishonor court orders implored the court to revoke Kanu’s bail.

The wheels of justice grinds too slowly for Buhari’s military oriented, democratic government to hope on. On September 10, 2017, the military invaded Kanu’s home and reportedly left their – Fela Kuti’s asserted – regular trademark: sorrows, tears and blood. Kanu has since been out of sight. There is more to his disappearance than meets the eye. He is either dead, in solitary confinement, or has absconded when the military overpowered the IPOB members that formed human-shield round his house.

Mind boggling, could an outspoken Kanu ever abandon his supporters at such a crucial moment, forsaking them to die of state’s bullet? Could an outspoken Kanu ever keep mute on IPOB’s proscription as a terrorist organization? While these questions await answers, a major pointer that Kanu is alive emerged. IPOB sacked him as the director of Radio Biafra. Concurring with the arguments of rights activists and senior lawyer, Festus Keyamo, after declaring the army killed Kanu, did IPOB wake him from the grave to question him over allegations of inciting violence and misappropriation of funds before sacking him? Presumably alive, what would be the ultimate end of Kanu?

Kanu may end like Isaac Adaka Boro (1938-68). Boro fought for the emancipation of the Niger-Delta, decades before it became a popular catchphrase. The new generation activists – including Asari Dokubo, Ateke Tom and Government Tompolo – only picked the baton to finish the race that consumed Boro. The oil firms and state’s exploitation of the Niger-Delta frustrated Boro to declare an independent “Niger Delta Peoples Republic” on 23 February, 1966. Boro’s armed militia, the Niger-Delta Volunteer Force, battled the Nigerian army for twelve days before losing out.

Boro took up arms against the state and later picked up arms to fight for the state. On the eve of Nigerian civil war, the then head-of-state, retired Gen Yakubu Gowon released Boro from jail and enrolled him as a Major in the Nigerian Army to fight against Biafra. Boro fought gallantly, but was mysteriously killed in active service after he liberated the Niger-Delta from Biafra.

To the point, if Boro who once confronted the state could be tricked, used and allegedly killed by the state, Kanu may end up in a similar situation. The power-hungry opposition party may brainwash Kanu that he would get Biafra or juicy political appointment if he uses his influence to ensure the Southeast vote for the party. Kanu may later be silenced with death or relegated – like the All Progressives Congress, APC, is doing to Bola Tinubu and Atiku Abubakar – once the party gains control of power.

Into the bargain, if Tinubu’s henchmen withdraw their support for Buhari in the Southwest, the APC might opt to win the southeast in 2019 through Kanu. Cast no doubt, if a strong-willed Boro could work for Gowon, never boast that Kanu cannot work for the APC in the future.

Boro died fighting for the recognition of minority rights in the Niger-Delta, but the people are still suffering amidst surplus. Kanu too may die for Biafra and the struggle would continue for decades without Biafra coming to pass.

Kanu may end like Ken Saro-Wiwa (1941-95). Saro-Wiwa wrote passionately against the oil exploitation, environmental degradation and human rights abuses in Ogoni. He swapped Boro’s gun for pen by declaring to his people that “I do not want any blood spilt, not of an Ogoni man, not of any strangers amongst us. We are going to demand our right peacefully, non-violently and we shall win”. Despite being non-violent, the Sani Abacha military regime could not tolerate or negotiate with Saro-Wiwa. He was silenced with death!

The Abacha government accused Saro-Wiwa and eight other activists of instigating the riot that led to the murder of four Ogoni chiefs. It was widely reported that Saro-Wiwa did not participate in the riot because the military had denied him entry into Ogoni on the riot day. After nine months in detention, the Ogoni-nine were arraigned before a tribunal that sentenced them to death-by-hanging on October 31, 1995. In the face of public outcry and global plea for clemency, the Abacha government hanged Saro-Wiwa and the eight activists on November 10, 1995.

One may argue that such gruesomeness is not possible under a democratic government, but if the court, for instance, hands Kanu a death penalty in his ongoing treason trial, the state may hurriedly execute him on judicial grounds, when all means of appeal are exhausted.

Buhari and Abacha are former military dictators. It is thus quite possible for the military that “publicly” executed Saro-Wiwa (under Abacha) to secretly execute Kanu (under Buhari) when soldiers invaded his home. If Saro-Wiwa was executed for an offense he (possibly) didn’t commit, Kanu too can be later accused and indicted for same. The state forces that are desperate to silence him and the politicians displeased with his rising popularity may use the Judas among his disciples to frame him up on crimes such as murder or illegal arms importation.

Kanu may end or might have ended his desire for Biafra like Ojukwu. If a gallant military officer like Ojukwu could abscond into exile, leaving the Southeasterner’s to languish in anguish at the height of the civil war, it is possible that a diaspora returnee and city dweller like Kanu might have absconded and possibly bowed cheaply to the superior force of the Nigerian state.

Ojukwu and Kanu aimed for Biafra but their style of steering secessionist movement differs. Ojukwu showed bravery by backing his Biafra declaration with action. In contrast, Kanu seems lost in focus. Challenging elites that are not willing to disintegrate or allow for referendum goes beyond rants and threats. Kanu’s actions have so far revealed that he lacks the essentials needed to restore Biafra. His uncouth orations also shows he lacks the maturity.

As observed in Africa, Kanu may help free Biafra from Nigeria and hold on to it as Mugabe did in Zimbabwe. Secession doesn’t guarantee peace and equity. Biafra may disintegrate to grapple with ethno-religious violence and a survival economy like that of the Central African Republic. Biafra may secede to know no peace. It may be another South Sudan that gained independence, only to start another round of ethnic violence and civil war.

On the other hand, Kanu may end up being a replica of Singapore’s Lee Kuan Yew. He may, by luck or circumstance, get Biafra and swiftly transform it from an underdeveloped nation to a developed one. Biafra may later develop to the envy of Nigeria; just as Singapore is more developed than Malaysia.

So long as the Buhari government insists that Nigeria’s unity is non-negotiable, our cohabitation must be constantly negotiated to reflect equity and fairness. Rational distribution of power and resources is breath for the survival of Nigeria. Force, intimidation and harassment would not end the agitation for Biafra. Secession can only be averted if Nigeria is restructured for the minority to enjoy rights.

Kanu would either conquer Nigeria or be consumed by Nigeria. One or the other, his silence must not be misjudged. He is either busy strategizing his comeback or his mission to disintegrate Nigeria has died in him, or with him.

*Omoshola Deji is a political and public affairs analyst. He wrote in via moshdeji@yahoo.com