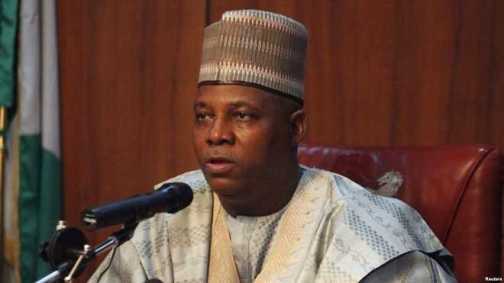 With shaken voice and tears rolling down his cheeks, Borno State governor Kashim Shettima on Monday narrated before President Muhammadu Buhari in Abuja how Boko Haram”s resurgence in his state has led to the displacement of thousands of indigenes and the dire security situation in Northern Borno.

Shettima, who came with a delegation of Borno chiefs and elders was moved to tears because of what he described as the recent setback in the fight against insurgency.

He, however, noted that the leaders had not lost hope in the President’s ability to win the war and restore peace in the state.

Amidst the tears, he told the President that the delegation came to present a set of observations and specific requests from a security meeting held a week ago in the state, which will require urgent presidential intervention.

The meeting has now come to an end and the governor declined to give details of the observations and requests made to the president.

Others present included the National Security Adviser, Mohammed Babagana Monguno, the Chief of Staff, Abba Kyari, the DG of DSS and NIA, Chief of Defense Staff, Abayomi Olonisakin and members of the National Assembly.

Borno has been one of the hotspots of insurgency with several attacks, claiming the lives of many including security operatives.

One of the most significant in recent times is the killing of several soldiers after an attack on their military bases in Metele, Gazamalu Local Government Area of the state.

Another equally significant attack is the abduction of over 200 female students from the Government Secondary School in Chibok town in 2014.

After several negotiations between the Federal Government and the insurgents, some girls were released.

A similar attack occurred in Dapchi, Yobe State (February 2018) where over 100 schoolgirls were abducted. After several negotiations, almost all the girls were released except one (Leah Sharibu).

She was held back by the terrorists for refusing to renounce her faith.

A few others were said to have died as a result of the trauma while in captivity.

Also in Borno, some aid workers were abducted and killed in 2018 by the insurgents after they claimed that the deadline they gave to the Federal Government to meet their demands had expired.

While the government has expressed sadness over the spate of attacks, it has continued to reassure Nigerians that the war against insurgency is not yet lost.

Severally it has also debunked claims that the insurgents were still in control of some towns, with the President insisting that his administration has recorded significant improvement in fighting Boko Haram.