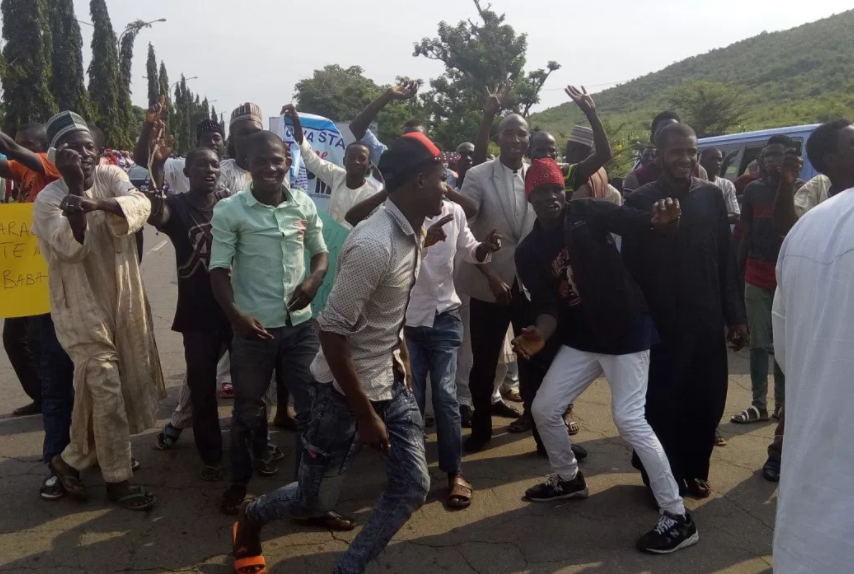 The News Agency of Nigeria (NAN) reports that security personnel deployed to ensure smooth traffic flows along the highway abandoned their duty posts as they could not control the crowds, shouting “Sai Baba Buhari’’.

Some of the pro-Buhari protesters were also heard casting and shouting unprintable words at Charles Oputa, otherwise known as Charly Boy, who led a protest movement calling on President Buhari to return home or resign.

Another set of protesters also stormed the Supreme Court’s gate of the Presidential Villa, begging the security personnel on duty to allow them enter the main premises of the Villa to welcome the President.

NAN reports that President Buhari, who returned to Abuja on Saturday without his wife, Aisha, was received at the airport by the acting President, Yemi Osinbajo, six state governors, ministers and some presidential aides.

NAN reliably learnt that Aisha Buhari, who was with her husband in London during his medical vacation, would soon be returning to Nigeria.

Among those at the airport to welcome the president included members of the National Assembly, service chiefs, Inspector-General of Police Ibrahim Idris, Chief of Staff to the President, Abba Kyari as well as other presidential aides.

Others at the airports were the National Security Adviser to the President (NSA) Retired Maj.-Gen. Babagana Monguno; the Director-General, Department of State Security (DSS), Lawal Daura, and other dignitaries from and within Abuja.

The President took a national salute from the Presidential Guards Brigade while cultural groups were also singing and dancing to welcome him back home.

The President, who has since retired into his official residence in the Presidential Villa, Abuja, is expected to speak to Nigerians in a broadcast on Monday at 7a.m.