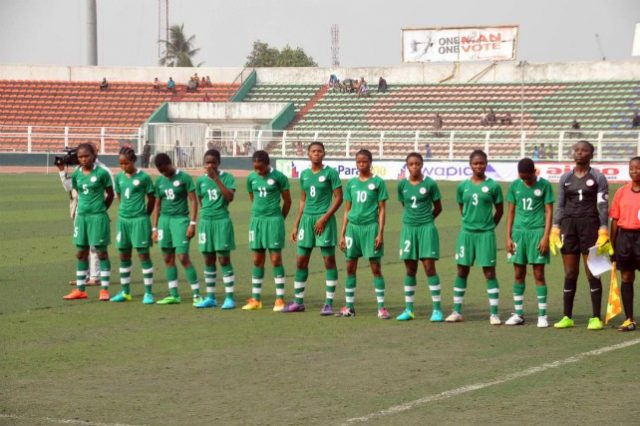 The Cameroon female football team have booked their place at the 2018 FIFA U-17 Women’s World Cup at the expense of Nigeria.

The hosts played out a 1-1 draw with the Flamingoes at the Ahmaduo Ahidjo Stadium, Yaounde, capital of Cameroon, on Sunday.

The young Lionesses qualified on away goal rule with an aggregate of 3-3.

Nigeria needed only a win in Yaounde, or a high score draw from 3-3. That would have seen them sustain their reputation of playing in every edition of the FIFA U17 Women’s World Cup since the competition was launched in New Zealand 10 years ago.

Cheered on by their die-hard fans and a sizeable crowd in Yaounde, a tactically-disciplined Cameroon displayed entertaining football to the admiration of the spectators.

Alice Kameni got the opener in the 15th minute much to the delight of the home fans.

After recess, the Nigerian side increased the pace taking the game to the homers as they connected with some beautiful passes.

They eventually got the leveller thanks to Vincent Precious but that was not enough to take them to the World Cup.

SEE ALSO: GRACE AMA TO NEW ACTORS IN NOLLYWOOD – THEY SHOULD RESPECT THOSE THERE BEFORE THEM.