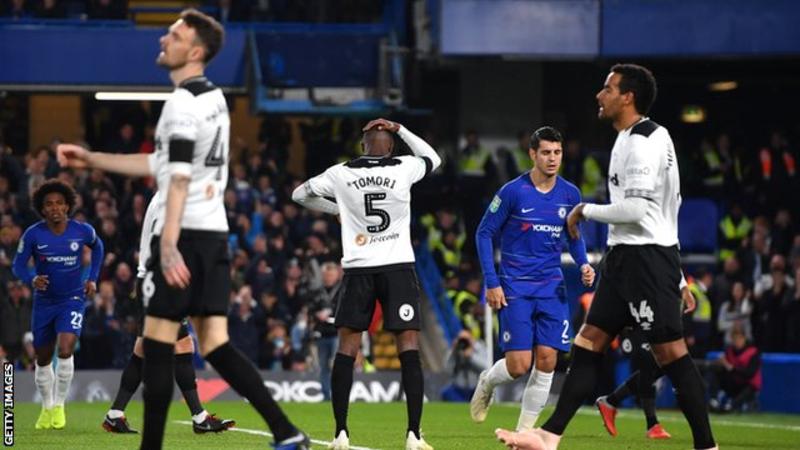 Chelsea knocked Derby out of the Carabao Cup in the fourth round as Frank Lampard’s return to Stamford Bridge as a manager ended in a dramatic defeat.

Five goals were scored in a frantic first half, including two own goals from Derby defenders Fikayo Tomori and Richard Keogh.

The Championship side came from behind twice through Jack Marriott and Martyn Waghorn.

But Cesc Fabregas slotted home four minutes before half-time for what proved to be the winner.

Derby substitute David Nugent hit the inside of the post with a minute of normal time remaining but the ball rebounded safely into goalkeeper Willy Caballero’s hands.

Chelsea have been drawn at home to Bournemouth in a repeat of last season’s quarter-final.
It was a big night for Chelsea’s two on-loan players Tomori and Mount, who were given permission to face their parent club.

Tomori’s own goal after just five minutes – which deflected backwards off his standing leg as he attempted to clear Davide Zappacosta’s cross – was greeted with encouragement from Lampard, who gestured to remain calm.

Derby responded as Marriott coolly fired an equaliser into the far corner and, after Keogh’s own goal – a deflection from another Zappacosta cross – they did so again when Mount turned provider for Waghorn.

Mount showed composure when he slid an inch-perfect ball across goal and he was impressive in the second half, twice going close to scoring.

Both loanees had a point to prove in front of Chelsea’s staff and their displays certainly did that – and also showed how the loan system can be beneficial to the Blues.

Chelsea had 70% of the possession but Derby were no bystanders with seven shots on target to the hosts’ five.

The side sixth in the Championship were a constant threat in the second half as Marriott’s drive was tipped onto the top of the net and Mount went close with a powerful long-range effort.

Keogh almost equalised in the 84th minute when Tom Huddlestone played a sublime ball over the top, while Nugent thought he had scored but saw his shot rebound off the inside of the post.

But Fabregas’ goal proved the winner as he took advantage when the ball ricocheted kindly from Chelsea right-back Zappacosta, who was involved in all of their goals.