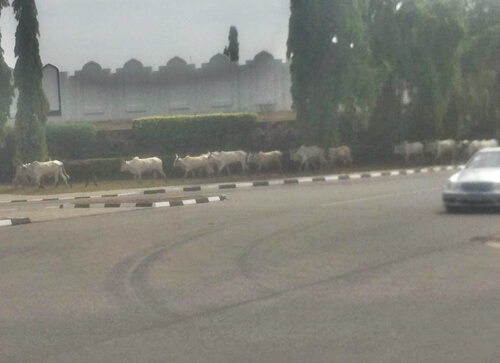 In a swift reaction to the video which had made the rounds online, a veterinary doctor in charge of the state house vet. Clinic, Haruna Tanko, said that the herd of cattle were seen grazing inside the Aso Rock presidential villa last week belonged to the presidency.
According to Premium Times, Tanko said cattle were “being moved from their ranch to a different location”.
He said; “The cattle ranch was dirty because of the just concluded rainy season and we normally move the cattle and clear the ranch before returning them.”
He also said those seen around the cattle were the staff of the veterinary section, saying “it is not possible for anyone to bring in their cattle inside the villa, certainly not herdsmen”.
Tanko added that the villa usually has different types of animals in its stock. He said the cattle are usually processed for the use of the president and vice president.
Why Cattles Grazed in Aso Rock Presidential Villa – Presidency Finally Reacts was last modified: December 5th, 2017 by Arinze Ago