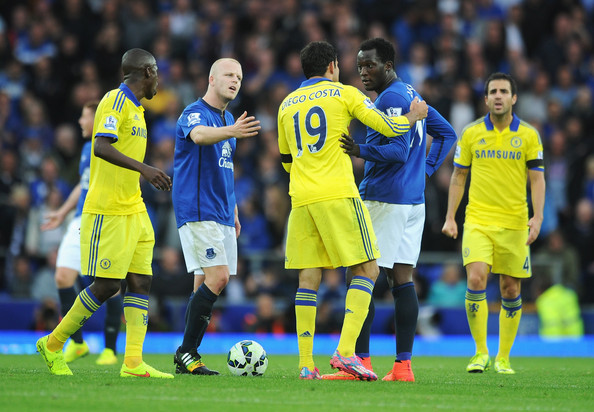 Who rules Stamford bridge in this premier league clash of titans, Diego Costa or Romelu Lukaku? A question usually pondered by fantasy football managers, but also answered by Chelsea boss Antonio Conte on Friday.
“Lukaku is scoring a lot of goals this season, but not only this season. We must pay great attention to him,” said Conte.
“In my team? As I said before, for me my players are the best in the world. I don’t change my players with other players.”
And did he agree with N’Golo Kante being awarded PFA Player of the Year?
“In this case, I prefer to have 23 votes and to vote for every one of my players,” replied Conte, ever the diplomat.
A draw or a win for Chelsea against Everton on Sunday guarantees Champions League football next season – “a good achievement” according to Blues boss Antonio Conte, but the Premier League title is clearly his main focus.
“When we started this season, our first target was to play in the Champions League next season,” said Conte.
“It’s an important target for the club, for the fans, for the players. But, for sure now, we stay in a position to try also to win the league.
“Obviously, with six teams between Chelsea, Tottenham, City, Arsenal, United, Liverpool, two strong teams won’t play next season in the Champions League.”
“It’s 11 games that we are not able to keep a clean sheet and, for this reason, it’s important to improve, to work on the situations we’re conceding the goals. I’m not concerned about this, but at the same time, we are working on it.”