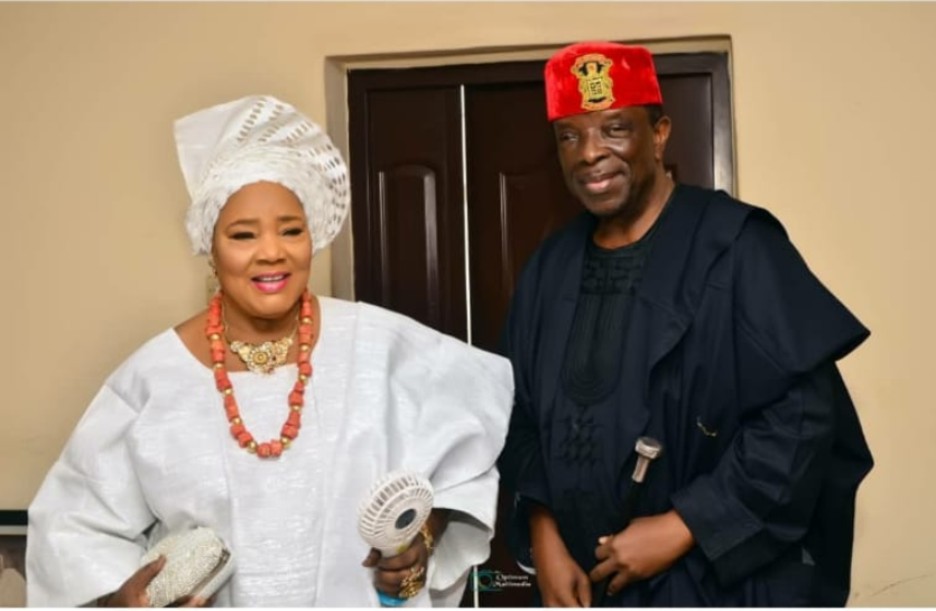 On the 9th of May 2020, Chief Mrs. Bisi Osibogun was sworn in as the new Iyalode of Ijebuland at the palace of the Awujale of Ijebuland, Oba Sikiru Adetona. The Iwuye will be after Covid-19 completely clears off.

Chief Mrs. Banjo was made Otun Iyalode and Chief Mrs. Rodipe was made Osi Iyalode. Before her appointment, she was the Yeye Meso of Ijebuland and one of the respected Chiefs of the Awujale.

In 2018, this beautiful Iyalode of Ijebuland spoke to City People about a lot of things, like her style. She is one of the prominent celebrity women in Ijebuland. She is a very stylish society woman who was conferred with a traditional title which fits her. A few years back she was made the Omeso of Ijebuland by the Awujale of Ijebuland, Oba Sikiru Adetona. She has also been the only female on the Ojude Oba Planning Committee in Ijebu-Ode.

Chief Mrs. Bisi Osibogun is the widow of late prominent Ijebu technocrat and super perm sec., Otunba Olufunminiyi Adekunle Osibogun, who was for many years a top civil servant in the old Western region and Ogun State when states were created. He was born on 5th December 1921 and died 27th April 2014. He was Otunba Ajana of Ijebuland in his lifetime.

Chief Mrs Osibogun spoke to City People Publisher, SEYE KEHINDE about her life at her house in Ijebu-Ode.

This year’s Ojude-Oba is going to be a great one because we have planned a lot for it. The Regberegbes are planning for it.

I was born in Ijebu-Ode. My father was a civil servant. He was a produce examiner to be precise. They used to transfer them a lot in those days. Wherever my father was transferred they will take us. But there was no holiday that we won’t come to-Ijebu-Ode-Ileya, Xmas, we always spend in Ijebu-Ode.

Yes. It affected my schooling greatly. When you are transferred from one place to another, you have to repeat the class you were. All the same, I coped.

Well, when I was young, when I was in secondary school, I wanted to be a Policewoman. I just like the Police. I have friends in the Police force. Unfortunately, my mum did allow me.

It was nice. We had our own challenges, especially the challenges that come with marrying handsome men. Aside that there has not been any problem with me and my late husband, Tokunbo Osibogun. When we got married, he was Mr. Osibogun. But the Awujale gave us chieftaincy titles in 1985. He was an Otunba, I am a Chief.

He was handsome. His height. He was easy going and cool-headed. He was much, much, much older than me. When we got married, he was 49, I was 25. The age difference put me off at first that I can’t marry an old man ooo. And my mother said age, is not a barrier in marriage. Just be focused. I know this man would be a responsible husband. And truly, he is one. He was one. He was highly responsible. But his being handsome made him a lot cake. He was in high demand. But one thing I respected my husband for was that he was a decent man. He listens to me a lot especially if I complain about any woman trying to be too close to him. He knows how to read me. He knows how to handle my feelings.

(She smiles). How did you know? Many thanks to my late mother. She enlightened us about advances from man. She will say if they come to you, don’t abuse them ooo, don’t fight with them ooo, just to them, just talk sense into their head. When we were single, myself and my younger sister, this guy will come another one will come to greet us, we would entertain them in my father’s house. But we cannot follow them to anywhere. If we are seeing them off, it must not be beyond the door, until our suitor came.

Again thanks to my mother. They were old fashion. But they made us develop ourselves. If I am going out or she wants to send me on an errand you dare not dress anyhow. She will call you back to go and dress up and makeup. She used to tell us: how people see you is how they will rate you. As time went on I developed myself. I love fashion and I do fashion a lot.

Well. I could have done a lot but my husband will not allow me do anything about fashion, outside the house. I am into Beauty also. I wanted to put up a Beauty parlour, he said no. So there was nothing I could do. He had the last say.

No. Because my mother warned us not to join any Regberegbe because they have caucuses and they are always fighting. And I don’t have time for that. They fight a lot. They gossip a lot. They quarrel a lot. I don’t have flair for Regberegbe.

I do a lot of exercise around the house 30 minutes to 1-hour walk and jog. Most of my time, I spend in the kitchen, baking and cooking.

She is prettier than me. She is Alhaja Peju Okusaga. She is my immediately junior sister. We do all things in common. She lives in Ijebu-Ode too. It has always been my mother’s prayer that she wants her children to live and get married in Ijebu.

DELE MOMODU Reveals What Life Has Taught Him @ 60