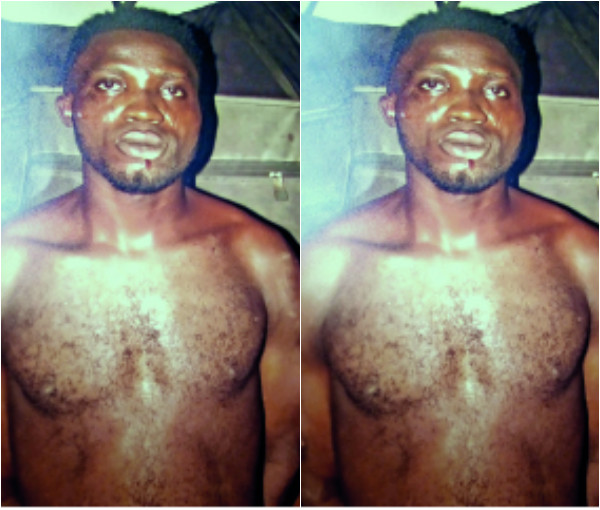 A cultist named Sulaimon Babatunde, 32, has been arrested after he drowned a rival cultist who killed his 2-month-old baby.

Sulaimon Babatunde, 32, watched last year as a rival cult allegedly led by one Ahmed, killed his two-month old child and beat his wife. Since then, the pain and horror of that day have not left the Kwara State indigene.

Anytime he remembers the traumatic experience of that fateful day at his No 135 Isale Gambari home in Ilorin, he always wept and got moody. There is no doubt that the fight for supremacy between the two rival cults seared an everlasting wound in Suleiman’s heart.

But, the death of the baby was not the only thing that agonizes Suleiman. According to SunNewsonline.com, Sulaimon Babatunde also lost his wife, who packed out of the matrimonial home for fear of safety due to the incident.

“The fight started between my group and that of Ahmed’s long time ago. However, the other group invaded my house, beat my wife and killed my two -month old baby with her, and after that, they all fled to different parts of the country. Then in January this year I came to Lagos,” said Suleiman.

He came to Lagos, he said, to have a new beginning and possibly take another wife and start a new family.

But that was not to be, as the shadows of the past again crossed his path, disrupting his good plans.

Suleiman, who lives at Oke Arin area of Lagos Island, was passing along Carter bridge at about 10:00am on June 5, this year when he came across Ahmed.

The ember of the age long feud kindled into a fire, and all he could think of was vengeance, but, he realized that he could not confront his old foe alone.

To carry out the revenge, he enlisted the help of two of his friends, one Kazeem and Sodiq, who joined him on Carter bridge after he called them on phone. They allegedly caught Ahmed and pushed him into the lagoon.

It took the effort of sympathizers and passersby for the suspect to be arrested, while his accomplices escaped.

“It was not my intention to kill him, I just wanted to hold him responsible for the death of my baby. If I wanted to kill him I would not attack him in a public place. It was for the sake of justice that I called my friends to help me take him to the nearest police station.”

The clash between Ahmed’s and Suleiman’s gang is just one of the rife bloody cult conflicts recorded in Kwara state. Just recently about seven persons reportedly died between Friday and Sunday in Ilorin following renewed cult clashes between feuding members of the Aiye and Eiye confraternities.