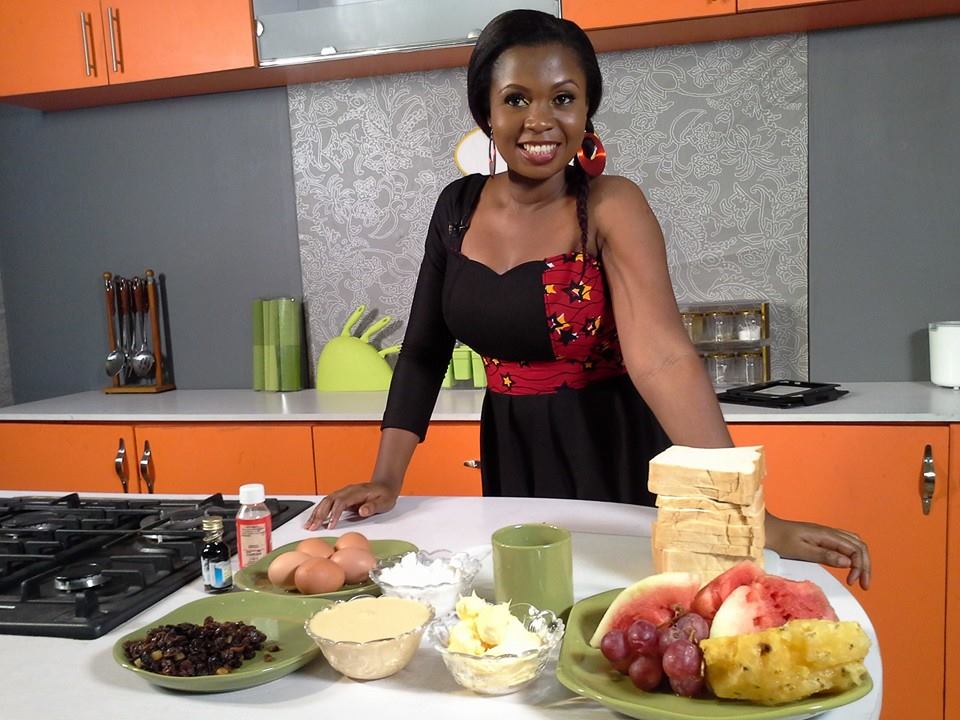 Gina Ojo is an exciting person to be with any day, anytime. She is always full of life. She bubbles and she is quite excited about what she does for a living. She is the host of Foodies & Spice, the popular cook show on TV. So popular is the 4-year-old programme that it shows on 10 TV Channels across Nigeria. It shows on TVC, STV, WAP TV, Rave TV, PRTV Jos, Adamawa TV, NTA, Zaria and ITV Benin and Abuja, VOX Africa. She also has a popular fan page on Facebook that attracts a huge followership. It is a TV lifestyle and cooking programme. It is also a travel lifestyle programme. Hers is a cooking show with a lot of difference because she makes her presentation to be very lively and entertaining. She is quite dramatic in the way she presents her show every week.

Last Wednesday, City People Publisher, SEYE KEHINDE visited her at her Foodies and Spice Kitchen Studio, at Ajao Estate in Lagos, and she spoke about her life and business. Below are excerpts of the interview.

How did the whole idea of starting the TV programme, FOODIES & SPICE develop?

First I have always been someone who is inclined towards Entertainment. Hence, when I was in my secondary school at Marymount College, Agbor, Delta State, I decided to come to Lagos, once. I was in JSS 3 then, I wrote scripts. I was in the literary and debating society. I came down to Lagos. Then Nollywood was just starting. I looked for them and I took my script to them. I was pretty young. That script adventure did not work. I went back and finished my secondary school. All I had in my head then was come to Lagos, come to Lagos.

I came, somehow Fate led me to Fidelis Duke’s office. His office was opposite my cousins house. I saw a lot of these people hanging outside. I took my script to him and he gave me audience. He told me he didn’t want any script then, but I kept coming around. That was how I bagged my first role in a movie titled, The Colours of Tomorrow This was 1998/1999. Chyzoba Bosa, Proper Pictures was the Producer. It had people like Joke Silva, who played the role of my mum. Wike Jombo, Nobert Young and others then I ended up playing the lead role. For a young girl who just came to Lagos it was a big deal for me. It was like a dream come true.

I got home and I became a small village super star when I got back to Agbor. But everybody said I should go back to school. Joke Silva told me the same thing. I went back. I fought so hard to come to UNILAG so that I will be close to Nollywood. Of course, it didn’t happen. I went to Ambrose Alli University. I studied Law. So, I am a Lawyer. Even when I finished I was still brimming with ideas. I had so many things in my head. I have this thing about me. I am not wired like every other person. I don’t know how to wait for things to happen. I make things happen. I already wanted a job. Others were still waiting to go to Law school and then serve.

I wanted to have a job even if you didn’t want to pay me. I joined one of my aunties to go to market with her. She is into media marketing. She paid me N7,000. So, I decided to go around with her. One day we met Kwame (Femi Aderibigbe). He and my sister discussed their own business. He then said he needed a marketer. I jumped at it. Kwame signed me on. I resumed with him. That was how I started learning how to market. Before I knew it, service came calling.

Immediately we finished the Law school bit I knew I needed to work. I sent my CV out. Businessday called. There was an opening whilst we were contemplating salaries, Kwame called. He asked me to come back with a higher salary package. Then he just signed a deal with HITV. He wanted me to handle legal issues for him with all the deals he was signing.

That’s why I can’t tell my story without mentioning Kwame. He gave me a huge chance. I didn’t know anything about Entertainment Law so I went to meet the Entertainment lawyer for Multichoice. He taught me a lot. I went to meet him in Yaba. I did researchers also. He dymistified what the job was all about. So I started working with Kwame again.

So how did the cook show start?

It was also at Nigezie. Kwame asked some of his staff to have airtime and create programmes. From Nigezie we had Orisun. So we had 2 channels we were managing, so we could have airtime and produce whatever we had in mind. I started a story telling programme on ORISUN For Nigezie, I thought of a talkshow. I did the 1st episode for Orisun which was the children story telling. In the middle of it all, I had to move to WAP TV to be GM. Getting to WAP TV I told them I wanted to do my show and they accepted for me to do a Cook Show. After 1 year of putting WAP TV together I began Foodies and Spice programme we entered into agreement on how to go about it. Foodies and Spice started in 2013 on WAP TV. I started work with them in 2012.

Why did you decide to do a Cook Show? Why do a Food programme?

Its because of my love for cooking. First of all, I am a girl who likes Food and likes to cook. I grew up in an environment where Food is Key, where Food means Bonding. I grew up with my grandmother for a while in Agbor. A lot of people don’t believe it. I am a very village girl. I spent my whole life there. So I grew up in Agbor. My grandma used to cook everyday. That was a home where I can’t remember a whole day that kitchen did not happen. We were always cooking. It was the same thing in my mums house. It just got into me. I learnt cooking from there. In my home town, it was a thing of pride when mothers sit together and discuss their daughters cooking this and that, so every daughter just wanted to be that Star daughter that can cook.

So by the time I thought of my talk show I started thinking of a cook show because it was going to be easy for me to start. I didn’t need much to start unlike other ideas. What did I need? I just needed a studio. I needed a good crew. That was how we took off.

Four years after how has it been? How have you been able to sustain it?

Its been nice. Social media has helped me a lot. I put it online, so I am able to get real life feedback from people. I created a fan page and I started to grow it organically. I want the real people to talk to me. The feedback I get and the fact that people always talk to me is very encouraging. Initially, I felt frustrated when money was not coming, when the Adverts were not coming but each time I felt down and I go online to read my chats with my fans I get better when they praise me, Good Job, Keep it up.

I see feedbacks from people saying Gina, thank you so much. You have helped my marriage. I cooked this and that for my husband and he loves it so much. It makes my day. Some will say Gina I didn’t have a job. There is this recipe you told us, I tried it. It has worked and I am selling it now, I am making money. So, even if the agencies were not talking to me, I was enjoying the feedback.

These days, the feedbacks are so much I can’t read everything. For me its no longer about the monetary compensation that comes alone, I make people happy from what I do. People are watching. It has also affected my lifestyle in a way. I have a lot of people from different parts of the country that watch me week in, week out.