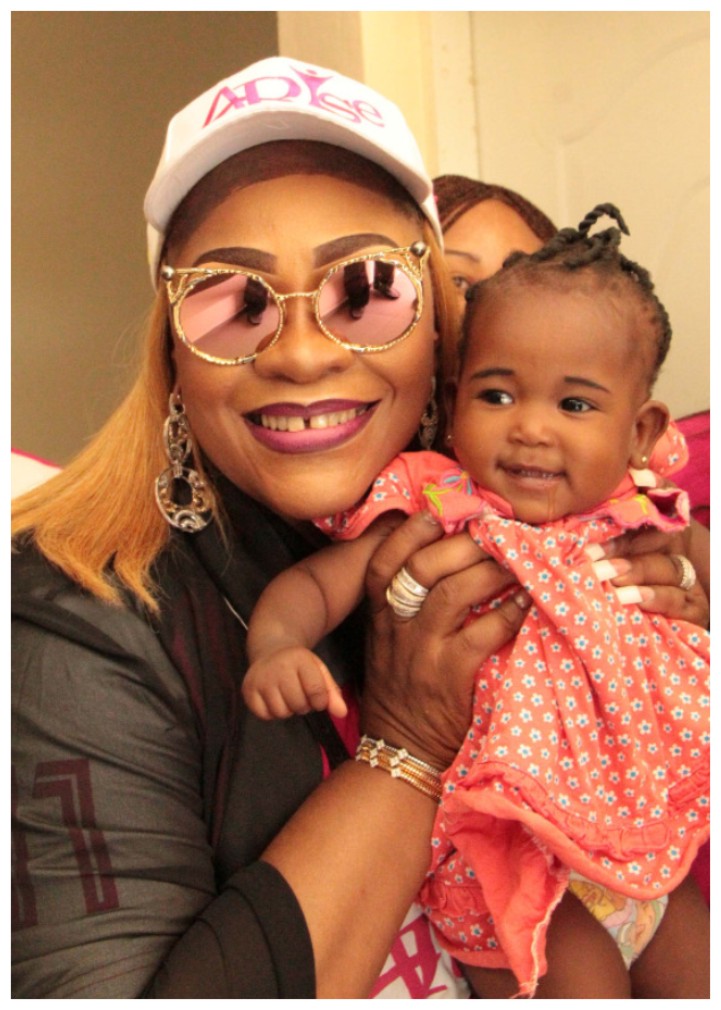 Dr. Siji Iluyomade, the founder of Arise Women, the most popular and innovative, NGO in Nigeria, has towered high on all fronts. She has successfully held empowerment programmes in Lagos, empowering over 4000 participants annually. She has taken that determination to empower people in different parts of the states to Abuja where she commissioned some laudable projects and light up the hearts of many villagers in the nation’s capital.

Dr. Siju Iluyomade on November 29th through 1st of December commissioned and donated ARISE Skill Acquisition and Empowerment Academy to the people of Dafara Village, Abuja and many women were trained on the day on various Skills provided by the Academy to help alleviate their condition and make them financially independent, the skills include Sewing and Fashion Design, Soap and disinfectant Making, Catering, Hair Dressing, Gele Tying and Makeup, Food Processing, Barbing and Bag & Shoe Making. Part of the products of the Academy were also displayed and donated to the villagers. The next Day, Dr. Siju went to Kabusa Village, a suburb in Abuja with a team of medical professionals and Volunteers to give free medical screening and treatment to all the Women, Men and children in the community.

A crowd of women, men and children were attended to in the area of malaria, pneumonia, high blood pressure, blood sugar levels amongst other illnesses. Arise also donated school bags to Kabusa Village youths and students, in line with her Arise goes to school project and encouraged them to take their academics more seriously. There was also a borehole commissioning for all villagers where they will have access to good water for their daily living. No fewer than 10,000 women will be impacted following the commissioning of the Arise Skills Acquisition And Empowerment Academy, and the launching of the Arise Women’s Farmers Association in Nigeria alone. The grand finale of the event was when the Arise Women’s Farmer’s foundation was launched at the gala night and dinner at Transcorp Hilton Hotel, Abuja and also to commemorate the 11th year anniversary of the NGO.

Present at the occasion were the First Lady of the Federal Republic President of Nigeria, Her Excellency Mrs Aisha Buhari, represented by H. E. Dr. Amuwa Abubakar Yari, Her Excellency, Dr. Bello, First Lady Niger State, Represented by Mrs. Zainab Bima, Minister of Women Affairs and Social Development, H. E. Mrs. Pauline Tallen, foremost business magnate and special guest of honour, Mrs. Bola Shagaya, wife of former Chief of Army Staff amongst others. It was a great occasion and various calls were made for Women to take their space and bloom. All the guests and team wore Arise Aso Ebi Ankara and light up Transcorp Hotel in a colourful way.

The long wait of the people of Dafara and Kabusa Village in the suburb of Abuja the federal capital territory for assistance to uplift their lives has become a thing of the past. This is as a result of the determination of Dr Iluyomade’s Arise Women Foundation determination and doggedness in making sure all the promises made to the village people in the “adopt-a-village” scheme embarked upon by the platform were all met.

The programme witnessed thousands of individual beneficiaries from various communities including two specific villages, Dafara and Kabusa where the Arise Skills Acquisition and Empowerment Academy was designed to train over one hundred thousand particularly women to start with.

The Arise academy is part of the fulfillment of Dr Iluyomade’s faith-based Non-Governmental Organization and commitment to accelerating nation building through the empowerment of women in the society. Since the NGO moved to adopt Dafara Village, Abuja in its scheme, over 800,000 inhabitants of the community including her neighbors have benefitted from different charity initiatives of Arise women foundation which includes the provision of free notebooks and textbooks to Dafara Primary School including tables and chairs. Also, free school bags were given to Kpaduma primary school pupils in Dafara. Arise built and donated a computerized library to Dafara Community Primary School, constructed and donated boreholes, thousands of bags of rice to Dafara, Kpaduma and Kobi Villages. The 10-bed medical facility was also built at Dafara village. Three different IDP camps in the North were also presented with Shoes, Clothes, Bags of rice and many more.

This laudable achievement is what is drawing the federal Government attention to this course and it was at this gathering in Abuja that the Minister of Women Affairs, Mrs. Pauline Tallen, expressed the commitment of the federal government under the leadership of President Muhammadu Buhari to any genuine organisation aiding the development of women in capacity building. She gave this assurance when she attended the special dinner and the official launch of Arise Women Farmers’ Foundation in Abuja, organised by Dr. Siju Iluyomade’s.

Speaking at the occasion, the minister, who expressed joy over the compassion displayed by Mrs Iluyomade and her Arise Women team in giving support to rural women in particular through her farming initiative said: “No woman should go to bed hungry. When you empower a woman, you have empowered the whole family, I have great trust in women, all the loans given to women have been paid back, women are better managers.

“I have met the people in charge of fertilizers and they have assured me of support to my ministry, we will make it available together with loans for farmers in the foundation because I have followed the tremendous empowerment and support Arise has given women both in Lagos and Abuja in the last 11 years with over 10,000 lives touched,” she said.

But the turn out of this bluestocking and the cultivated audience cannot be discussed without the inspiration and convener of this event, a highbrow women’s rights activist and lawyer who has in her intellectual repertory Doctor of Laws, Dr Siju Iluyomade. Indeed Dr Iluyomade had a dream, a vision to create and nurture a platform for women. It was 24 years ago. And so came a Faith and Life Clinic, a place where women share their problems, pains, joys, successes, and failures. So, they weep, merry and pray together as they come to the saving knowledge of the Lord and Saviour, Jesus Christ. The Faith and Life Clinic would morph into The Handmaidens as Dr Iluyomade, a gender equality advocate, began her journey of faith not only to work for but to empower and raise the profile of the market woman, the homemaker and ordinary women doing groceries on the sidewalk. Within a space of five years, the Handmaidens had taken phenomenal strides in skill acquisition programmes and empowerment of women. The women learned such trades as a hat, soap, insecticides, deodorants, indigenous furniture and dressmaking among others. But just as thousands of women began to appreciate this hope-inspiring programme and celebrating the quintessential Siju Iluyomade marvel, this groundbreaker and indeed pacemaker, was already in the next phase of her trendsetting journey to help the cause of God and to lift her fellow women. And so she envisioned and berthed Arise Women’s Conference. The Arise Women, a faith-based foundation, reinvented, redefined and reconstructed the whole concept of women’s cause. A lawyer of 30 years standing, Dr Iluyomade using her immense influence, gathered annually, topmost women in Christendom plus First Ladies of Nigerian governors, female ministers, women of the intelligentsia, business magnates and thousands of everyday women to conferences with Christian themes.

Arise however became a national subject matter of discussion for its tremendous impact on the empowerment of women, care for children and even elderly men and displaced people. Arise Women adopted villages around Abuja including Dafara Village for seven years development programmes, constructed schools in these villages, built a modern hospital, refurbished some schools and built fully computerised libraries and went to female schools like Queens College, and Methodist Girls Secondary School among others to educate the young pupils on health and specific hygiene matters and donating a massive generator to the visually impaired in Queens College, Lagos. This is not just a giant stride but a laudable lifetime project achievement which has gained international recommendation on all fronts.

PASUMA TO PERFORM AT GENESIS GLOBAL CRUSADE IN 2020