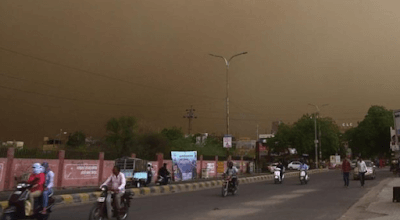 No fewer than 76 people have died and scores more were injured in fierce dust storms that hit the northern Indian states of Rajasthan and Uttar Pradesh.

Many of the dead were sleeping when their houses collapsed after being struck by intense bursts of lightning.

Dust storms are common in this part of India during summer but loss of life on this scale is unusual.

The storms largely affected three districts in Rajasthan – Alwar, Bharatpur and Dholpur – where at least 31 people were killed. Officials say Alwar is worst affected. Schools in the district are closed.

“I’ve been in office for 20 years and this is the worst I’ve seen,” Hemant Gera, secretary for disaster management and relief in Rajasthan, told the BBC. Our prayers are with them