Home News EFCC: Comedy of Discoveries and Bastardisation of the Anti-Corruption War By Jude Ndukwe
News

EFCC: Comedy of Discoveries and Bastardisation of the Anti-Corruption War By Jude Ndukwe 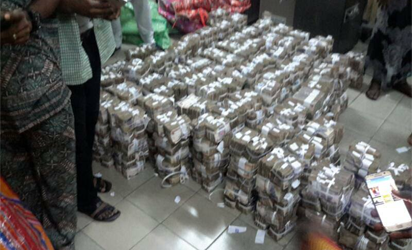 Ever since the whistle blowing policy of the federal government was announced in December of 2016, there has been a frenzy of activities in the anti-corruption sector of the economy. While many have been excited by these activities, others have approached the issue with deserving skepticism.
This is because a majority of Nigerian officials would always find ways of “legally” enriching themselves by circumventing government policies meant to improve the society.
With the sudden gale of humongous sums claimed to have been uncovered by the Economic and Financial Crimes Commission, EFCC, one begins to suspect that there is more to it than meets the eye especially when the Head of the organization has been described by the Directorate of State Security Services, DSS, as one who “has failed the integrity test and will eventually constitute a liability to the anti-corruption drive of the present administration”.

This damning verdict on Magu by the DSS was passed after what the security agency described as a painstaking investigation into the activities of the Borno born police officer while serving as EFCC’s Acting Chairman.

Part of the script to get a gullible section of the Nigerian public on his side is to get the easily excitable ones who seem to form a majority of the populace entertained with what looks like phantom discoveries and uncovering of humongous sums of money without any trace of the owners.

Such movies are, of course, very easy to act. All that would always be needed is the cooperation of those who have formed themselves into a cabal that has come to needlessly hate the senate and would do anything to spite that institution even if it means helping Magu get some monies from amenable government financial institutions to plant somewhere and later turn around to claim that Magu’s EFCC has discovered the same money where it was planted, hence, most of the discovered funds have no owners attached to them.

For example, how could anyone with brains believe that the EFCC actually discovered the large sum of N49m at the baggage screening section of the airport without either identifying the owner or apprehending the conveyor? How did anyone ferry that huge sum in five sacks through the screening machines of the airport and was not detected? Not that the money was hidden among other items, but were just all in five different sacks on their own, yet, passed through the screening machines without being detected?

Why has the EFCC not shown Nigerians the CCTV footage of the person purported to have ferried the money into the airport and ask Nigerians to help identify and apprehend him? Who were those who screened the sacks and passed them through before they got to the baggage section?

And as if that was not bad enough, few days later, the EFCC claimed to have discovered another N448m in a Lagos Shop on Ahmadu Bello Way, Victoria Island, still without an owner. One would have thought that the EFCC would be more circumspect in its operations so as not to cast doubts on them, but its desperation to be seen to be working has made it fall into the temptation of exciting Nigerians with ear-tingling news of discoveries. Somebody rented that shop; the shop has an owner. Where are they and who are they? Unless such vital information is provided, Nigerians would continue to deride the senseless Nollywood-like discoveries of the anti-graft agency as an action inspired by selfishness and desperation.
It is the same story with the N250m purportedly uncovered in the popular Balogun market few days after. That one, like its twin brothers, has no owner!

The latest of these discovery series are the $38m, N23m and £27,000 purportedly uncovered at Osborne Towers in the high brow Victoria Island area of Lagos. Since that discovery, several parties have been linked to its ownership without any clear indication as to who the actual owner is. That is exactly what happens when your discovery prowess seems to beat that of even Discovery Channel!

A good number of Nigerians are suspecting that these purported discoveries are nothing but stunts instigated by the federal government and scripted by the anti-graft agency just to either divert attention of the Nigerian public from the failures of the current administration and or for the laundering of Mr Magu’s already badly battered image.

A more disturbing angle to it all is the notion in some quarters that those who are pulling these stunts might just be pulling them to deceive the FG, the media and the general public while they smile away to the bank with their 5% reward from the federal government whistleblowing reward policy.

It is believed that those behind these dramas, which can be a powerful ring of highly placed persons, only plant the monies somewhere and raise a whistleblower who “tips off” the anti-graft agency who in turn swoops on them. And in order not to cause confusion about it and or blow open their lid, they sell the stories of the monies being abandoned by unknown persons only for them to claim the 5% whistleblowing reward on the monies through their fake whistleblower. This possibility is very real in the strange circumstances of the spate of sudden discoveries of cash in places where the owners of either the cash or the buildings they are discovered are not identified or even known.

So while Nigerians get easily excited by such news, the whistleblowing ring smiles to the banks with “legally” earned money (I am sure no one wants to know how much 5% of $38m is in today’s exchange rate value. That’s a whopping N580m at a conservative rate of N305/$, not to talk of other “recoveries” running into hundreds of millions of naira. So that’s good business for our new whistleblowing cabal. Let no one be deceived).

This is similar to the abuse the Emir of Kano, Sanusi Lamido Sanusi, once said was going on in the Central Bank where some powerful individuals are said to just sit in their gardens and call for hard currencies from the apex bank at very ridiculous or even no rates, sell to the Bureau De Change operators at prevailing market rate, make huge sums of profits and return the “borrowed” hard currencies back to the CBN while these highly placed individuals keep the profits.

One should not be surprised if that same ring has found its way into the anti-corruption war and are taking advantage of the loopholes in government’s good intentions about the whistleblowing policy, and making money for themselves through phantom discovery of monies without owners.

To stop this trend, the whistleblowing policy should be strengthened, and reward should go to only those whose whistleblowing not only lead to the discovery of cash but also the proper identification of the owners for arrest and prosecution. If not, powerful individuals will continue to source huge sums of money from government owned financial institutions, plant same somewhere, raise a fake whistleblower who discovers the money, get the percentage reward on it, and go to court to obtain a forfeiture order, and the money returns to government, and the cycle continues.

I do not trust the EFCC under Magu. An institution that is reputed for feeding the public with deliberate falsehood about suspects and facts of court proceedings as in the case of Col Nicholas Ashinze which has led to the stalling of that case cannot be trusted especially as the DSS has also confirmed that Magu has failed the integrity test. A man who has been confirmed by the DSS to have failed the integrity test can always fall for anything including the 5% that follows the whistleblowing report leading to the recovery of monies that have no one identified as their owners.

While Magu seems incurably fascinated by the attention he gets from the media, he lost about four high profile cases in just one week, an outcome that confirms the fact that his strategy of media trials and razzmatazz has seized his attention from diligent investigation and prosecution.

Making the counting of the monies uncovered a public show was needless just as it vitiates the seriousness otherwise attached to the anti-corruption fight and reduces same to nothing but a comedy designed to amuse rather than cleanse the society. All these have led to the bastardisation of the anti-corruption war. One of the most potent solutions to these charade going on is for government to look for a more competent and honest man/woman with clean records (and there are plenty of them out there) to take charge of the agency if we must achieve meaningful result in this fight!

Lastly, I implore the DSS not to shy away from commencing an investigation into this sudden gale of discoveries by the EFCC with a view to ascertaining their authenticity and help bring this madness to a halt. Anyone found complicit in the suspected “planting and harvesting” of monies anywhere should be brought to book immediately. This way, the confidence of Nigerians would be restored in the anti-corruption war.

EFCC: Comedy of Discoveries and Bastardisation of the Anti-Corruption War By Jude Ndukwe was last modified: April 16th, 2017 by Reporter

Mariah Carey spends Easter with Nick Cannon and their kids