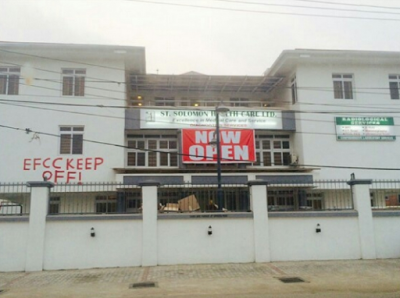 Amosu who was the Air Force chief during the last administration, is currently being investigated and tried alongside two others for stealing N22 billion from the coffers of the Nigeria Air Force while in office.

According to reports, the hospital named St. Solomon Hospital which is located on Adeniyi Jones Avenue in Ikeja Lagos state, is an upscale hospital that boasts of state-of-the-art equipment including a Magnetic Resonance Imaging machine valued at $1m. The agency reportedly handed over the hospital to the Nigeria Air Force due to lack of personnels that can manage the facility. The hospital and other properties of the former Air Force chief were seized last year.

Other properties belonging to Amosu that have been confiscated by EFCC include a N250m house on Adeyemo Alakija Street, GRA Ikeja, a N40m property located at NAF Harmony Estate Asokoro base and a N33 million worth of five-bedroomed house at Valley NAF Estate, Port Harcourt. The antigraft agency is said to be in the process of confiscating a £2 million house located at 50 Tenterden Grove, NW41TH, London allegedly owned by Amosu

Body of Man who jumped into Lagos Lagoon not yet found