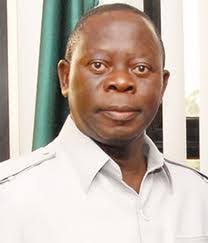 The National Chairman of the All Progressives Congress, Adams Oshiomhole, on Monday returned to Ekiti State with the governors of Ondo, Ogun and Kebbi states, Rotimi Akeredolu, Ibikunle Amosun and Bagudu Atiku, respectively, to persuade organised labour in the state to support Kayode Fayemi.

A former chairman of the Ekiti State chapter of the NLC, Ayodeji Aluko, led a delegation of union leaders and workers to the meeting in Ado Ekiti.

Mr Oshiomhole, a former president of the Nigeria Labour Congress, said the APC would win the election not by intimidation but based on past records of Mr Fayemi’s government in the state

The former Edo State governor said he had been told that the PDP was intimidating residents over the election. He assured that workers would not be sacked if Mr Fayemi emerged as winner on Saturday.

“Our task as labour leaders is not to agonise but to have the will to fight. I have not come to lament that Fayose has not paid workers, I have come to give guarantee to the workers of Ekiti that their welfare will be priority to us,” said Mr Oshiomhole.

“Fayemi knows that if he doesn’t perform especially for workers, I will box him from Abuja.
Don’t be afraid, I am behind you and I will get whatever due for you from Dr Fayemi if you convince your people to give him the votes.”

Also at the event, Mr Kalu said Mr Fayemi had promised to give Igbos resident in the state financial support to their businesses if elected as governor, the way he did in his first term.

He urged them to discountenance the hate speeches being peddled around allegedly by the PDP, labelling the APC as anti-igbo and Islamic party, saying such comments were attempts to smear the image of the party.

“You have to vote for a man that is better equipped for the job. Don’t listen to the rumour that APC is an Islamic party,” he said.

“When President Muhammadu Buhari came, he inherited a massively looted economy. The PDP people were just going to the Central Bank of Nigeria to collect money on the order of the then president.

“You know what it means for the CBN to be looted and that was why we experienced the economic recession when Buhari came and today we are out of it.

“APC remains the best party for Ndigbo. I cannot be bribed by anybody to deceive you. I would rather die than to deceive you because we are one.”

Mr Fayemi remarked that he would treat the Ndigbo and the workers with dignity and honour if given the chance, promising to fulfil all pledges made to the groups if given the mandate to govern Ekiti again.

Mr Fayemi is expected to be the main challenger to Kolapo Olusola, the candidate of the PDP in the election and current deputy governor of the state.