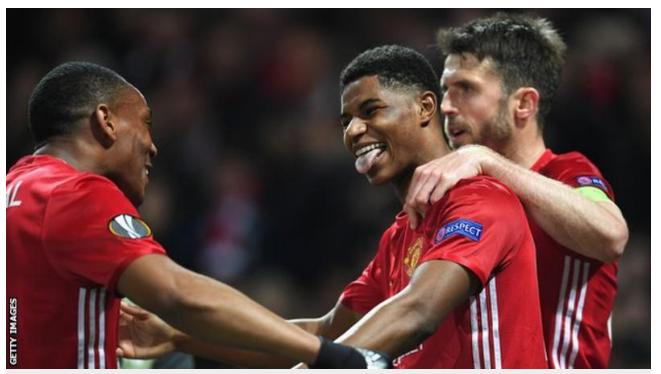 Manchester United will face Spanish side Celta Vigo in the semi-finals of the Europa League.

The Premier League side have won the European Cup three times but have never triumphed in the continent’s secondary club competition.

Dutch side Ajax, winners in 1992, come up against French club Lyon in the other last-four tie.

The first legs will be played on 4 May with the second leg on 11 May, and the final in Stockholm, Sweden on 24 May.

United manager Jose Mourinho won the competition with Porto in 2003 and comes up against La Liga club Celta, who have never won a major European competition.

Ajax, who beat Schalke 4-3 on aggregate to reach the last four, are also experienced European campaigners.

They have won the Champions League/European Cup four times previously and the Europa League/Uefa Cup once, beating Torino in the 1992 final.

Zinedine Zidane’s side could become the first club to retain the trophy in the Champions League era in the final on 3 June in Cardiff.

The first legs of those ties will be played on 2 and 3 May, with the return legs taking place the following week.