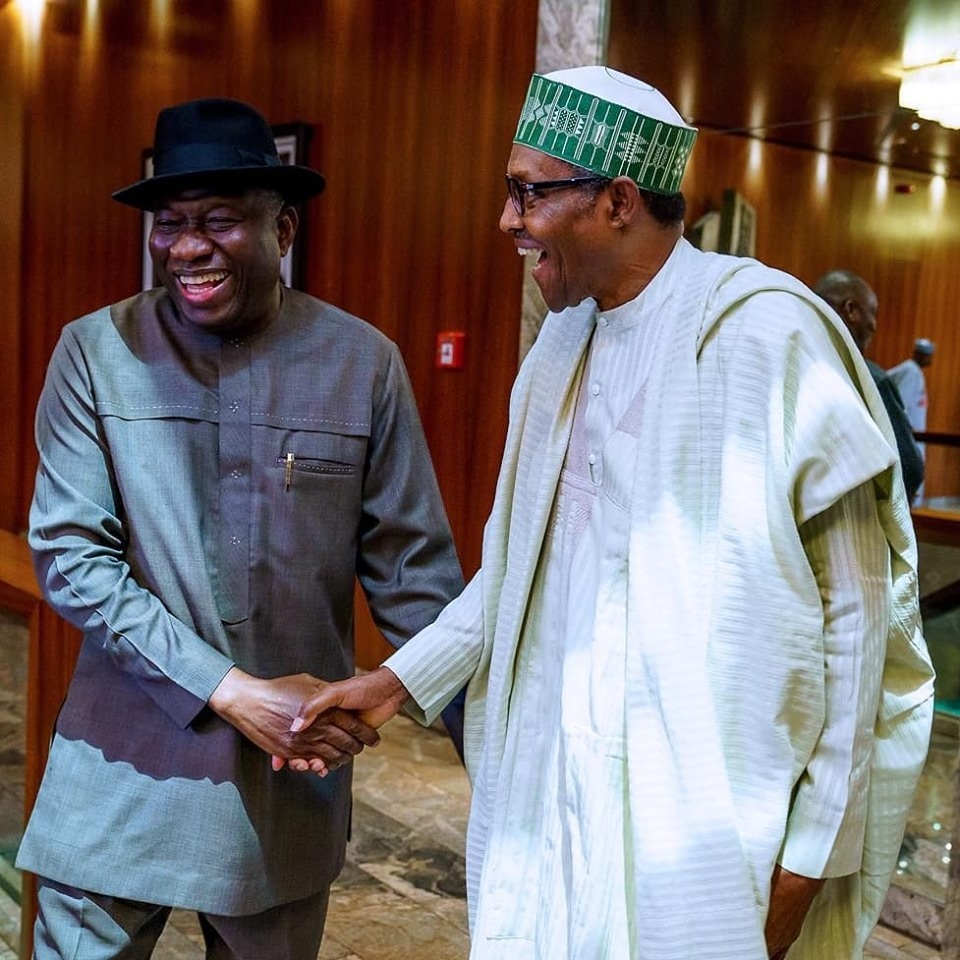 •Details Of His Deal With APC Governors

As the preparations for 2023 Presidential elections heats up, President Goodluck Jonathan has accepted the pressure mounted on him by APC Governors to accept to run for Presidency on the platform of APC. But details have been kept under wraps.

And we hear any moment from now, he is likely to decamp to APC from his PDP stable where he has not been comfortable with the way and manner the PDP leadership has treated him since he lost out at the elections.

Ahead of 2023 presidential election, some Northern powerbrokers in the ruling All Progressives Congress (APC) most of whom are serving Governors have been mounting pressure on former President Goodluck Jonathan, to contest 2023 election on their platform.

Even though Jonathan is yet to officially declare whether he will run in 2023 or not, City People can authoritatively reveal that he has accepted the offer in principle, while the finer details are being worked out. And he is quite excited about it we hear. A lot of his supporters believe he is very much in a vantage position to contest and win the race and his silence is borne out of his desire not to spur any unforeseen plot from any of the major political camp that may constitute a stumbling block.

Over the last 6 months some of the northern political giants have been mobilizing groups, both at home and in the diaspora, to rally support for his ambition, saying it is non-negotiable.

Mai Mala Buni, Governor of Yobe State and acting national chairman of the APC, led the governors to Jonathan’s residence in Abuja.

David Umahi, Governor of Ebonyi, who recently defected to the APC from the PDP; Atiku Bagudu, Governor of Kebbi and Chairman of the Progressives Governors’ Forum; and Abubakar Badaru, Governor of Jigawa, were at the meeting.

Also in the team was Kashim Ibrahim-Imam, a former presidential liaison officer to the National Assembly.

According to a source within the Aso-Rock there may be a bigger plan for 2023 and the former President Jonathan fits into the picture, considering his rising political profile in global political space, and the international trips for conflict resolutions among African nations.

It was also learnt that many APC leaders, especially in the Northern bloc are favourably disposed to Jonathan taking over from Buhari based on his hard earned integrity, commitment and deep knowledge of the programmes of the present administration, especially relating to the management of the economy.

According to a credible source in the party, “There is no doubt that Jonathan has every right to vie for the post and he is very qualified based on his record of one-term Presidency. Besides, he has remained active after leaving office and has been contributing to the national progress.

“But for many of us, we believe that if the presidency is zoned to the South, there will not be any need to micro-zone it to the South-West, the current vice President should be allowed to take over from the president. We have adduced so many reasons for this.

“The first is that he has been tested before and he has proved that he has the expertise to manage the affairs of a diverse nation like Nigeria.

In favour of Jonathan, however, he is a recognised democrat. He is a simple man who as president, conceded defeat to an opposition party, so that his nation can move on. By that simple but important gesture of patriotism, honour and nobility, Jonathan has earned the status of a statesman, which he could confer on himself just by the theatrics of tearing his party card before television camera.

It is also claimed that the northern bloc prefers the former president to any other candidate who may be positioning himself for the office.

The plan is to elect a president from the South-South and pick a vice who is from the Fulani clan, and ensure that all the key political offices and appointments remain in the North.

It also works well for Jonathan, as he would only serve for a term, having served 5 years as an interim and substantive president. This clears the doubt on possible extension of term for a Southern president. As soon as he’s done with his four years, power is expected to return to the North. Any candidate from the South other than Jonathan may want to extend his term beyond 2027.

Jonathan was initially something of an accidental president who, despite his relative inexperience, ascended office to lead his country when his predecessor and boss, Umaru Musa Yar’Adua, passed on in 2010.

In 2011, Jonathan surprised many observers in and out of Nigeria by securing the ruling party’s support for another term and ultimately winning the general election. His tenure was characterized by soaring unemployment, increased insecurity in the Northern Nigeria as Boko Haram gained strength captured territory. There was a widespread perception that public funds were being pocketed by the influential and well-placed people with impunity. To this day, he and his wife are dogged by various corruption scandals that are still winding their way through the courts.

To his credit, however, as the votes were being counted in March 2015, Jonathan conceded defeat to Muhammadu Buhari. He asserted that “nobody’s ambition is worth the blood of any Nigerian. Thus, surprisingly creating a new future for himself. Since his concession, the former President has been experiencing something of a renaissance as a senior statesman, at least in certain circles. He has been honoured with international awards and invited to deliver keynote speeches at global conferences on everything from peace-building to improving educational opportunities.

He is particularly sought after as a champion of democracy, and recently led international election observation teams for the National Democratic Institute in Liberia and the Electoral Institute for Sustainable Democracy in South Africa. His solemn tweets on respect for the rule of law in Ethiopia is covered in the press. The reinvention of Goodluck Jonathan is a fascinating phenomenon.

Jonathan has been holding meetings with APC governors since January 2020, and has kept sealed lips among his own party members, PDP, on the carrot dangled as the APC.

Though Atiku, who was the presidential candidate of the PDP in 2019 election, has not formally indicated interest in running in 2023, his associates have said they would persuade him to contest again as President Muhammadu Buhari would not be contesting.

The PDP, it was gathered, has perfected plans to pick his running mate from the South West even as the South East allies have maintained that the region was more focused on the presidency in 2023 rather than playing a second fiddle as running mate.