FESTUS KEYAMO HAILS ANTHONY JOSHUA FOR BEING A WORTHY NIGERIAN 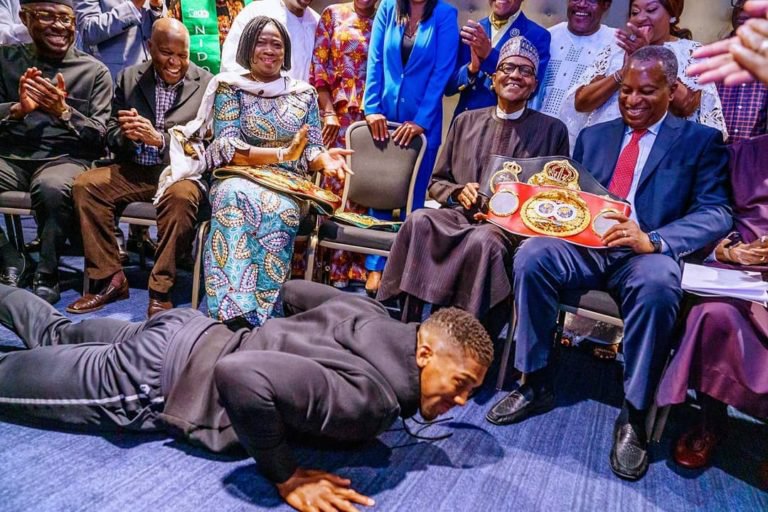 The Minister of State for Labour and Productivity, Mr Festus Keyamo, has commended Anthony Joshua, the world heavyweight boxer for the respect shown to President Muhammadu Buhari in London.

Keyamo said Joshua’s decision to prostrate before Buhari while presenting him his world title belts showed respect, stressing that such would make him bigger.

Joshua reclaimed the IBF, WBA and WBO titles from Andy Ruiz Jr on Saturday night, while Wilder will defend his WBC gold against Tyson Fury in February.

Joshua revealed he is aiming to pull off a ruthless early knockout win over Deontay Wilder if they eventually meet in an undisputed world title fight in 2020.

Both boxers hold all four titles between them, with Joshua reclaiming his WBA ‘Super’, IBF and WBO belts in a rematch with Andy Ruiz Jr.

Buhari is in London to take part in the inaugural UK-Africa Investment Summit holding on January 20.

Reacting, Keyamo in a tweet wrote: “Paying traditional respect to elders and those who’ve achieved more in life doesn’t belittle your own achievements.

“It rather draws more attention to them and makes them bigger than they are. Thank you @anthonyfjoshua for sanitizing the social media space – at least for a few hours!”

READ ALSO: NIGERIA HAS MADE NO PROGRESS IN BOKO HARAM WAR – EUROPEAN UNION

Nigeria Has Made No Progress In Boko Haram War – European Union