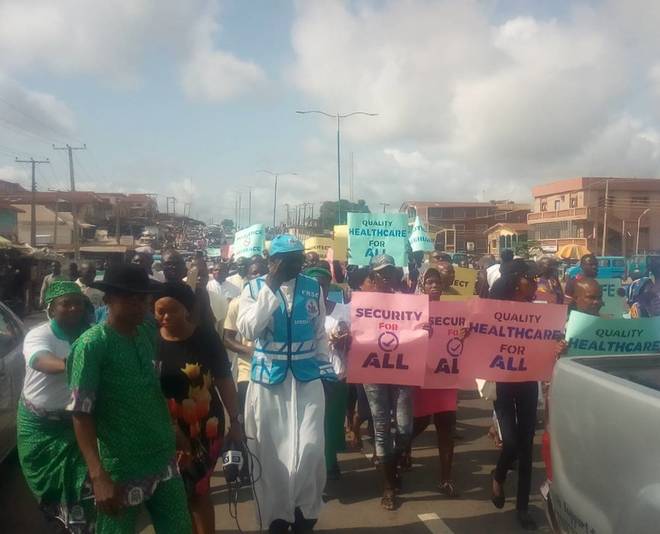 The priests and parishioners were gunned down on April 24 during a dawn mass at Saint Ignatius Parish, Mbalom community of Gwer East Local Government Council of Benue State.

Osinbajo spoke at Ayati, a small hilltop village on the outskirts of Ikpayongo, in Gwer East Local Government Council, during the funeral service for the victims of the church attack.

The Vice President, who was accompanied on the trip by Minister of Transportation Rotimi Amaechi and other top ranking politicians of different political shades, including Senator George Akume, expressed the Federal Government’s commitment to end the attacks.

He said the perpetrators of such dastardly and heinous crimes did not deserve to live among decent people. He prayed for the conversion of their souls.

Thousands of people mostly Catholics were at the Ayati prayer ground as early as 7a.m to secure seats for the event.

There was tight security around the burial site. Only identified dignitaries apart from priests were allowed to gain entry.

John Cardinal Onayikan, the Cardinal of the Abuja Catholic Diocese, urged Nigerians to rise above religious, political and ethnic divides to save the country from drifting into anarchy.

In his sermon at the service, the Cardinal said the killings across the country must stop and called on well-meaning Nigerians to unite in fighting the great evil that had befallen the country.

“This must not be politicized. The nation is in a state of emergency. We demand for synergy; division, especially on tribal lines so as not to throw our nation to anarchy,” he said

He called on the Federal Government to act decisively to end the spate of killings across the country.

The cardinal called on the people to be vigilant and “be your brother’s keeper”.

He warned that if murderers were allowed to continue without checkmating them, it will come to a time when people will begin to use other means of self- defence.

Onaiyikan called for forgiveness and warned against reprisals, saying the souls of the righteous were in the hands of God.

He appealed for calm and advised the Christian faithful to show appreciation to God in all situations.

“This is our hope which is based on our trust in God,” the cardinal said.

He described the death of the priests and the others as a “horrific massacre which will not be forgotten for a long time.”

The cardinal said the killed priests and their worshippers were martyrs of the church.

Bishop of Makurdi Diocese, Most Rev. Wilfred Anagbe, said the decision to bury the victims at the ‘Se Sugh Maria Pilgrimage Centre, Ayati, was to honor them as martyrs of the church.

“If our places of worship are no longer safe, then where can we run to in this country,” Anagbe said.

He expressed optimism that their blood would restore peace and end the killings in the state and across the country.

Governor Samuel Ortom condemned the incessant attacks on communities but commended the federal government for is efforts to stop the killings.

He said 492 people had died from herdsmen attacks since the beginning of the year.

FG Determined To Bring Killers of Catholic Priests In Benue To Book – VP Osinbajo was last modified: May 23rd, 2018 by Damilare Salami