Alhaji Lai Mohammed has sought partnership with China in the areas of film production and distribution, development of community cinema houses and collaboration in the co-production of films as well as screening of Nigerian films in China and vice versa.

The Minister sought this partnership in Abuja on Friday while signing a Memorandum of Understanding (MOU) with the visiting Chinese Vice Minister of The State Council Information Office, Mr. Guo Weimin, in the area of media and cultural relations.
Alhaji Mohammed called for cooperation between the Nigerian Film and Video Censorship Board and the China Censorship Board to curb the importation and exportation of pirated and adulterated movies of both countries.
In his remarks, the Chinese Vice Minister said the signing of the MOU between the two countries marked a new beginning in the relationship between the two countries, particularly in the area of media and cultural relations.
He said staff training and programme exchanges will further solidify the cultural ties between both nations.
The Minister also said that contrary to what naysayers want people to believe, this Administration is working assiduously to redeem its electoral pledges, especially in the critical areas of developing the economy as well as fighting corruption and insecurity. “Contrary to the lies that are being purveyed daily in the Social Media, this government has been working assiduously to redeem its electoral pledges. Our fight against insecurity is yielding highly positive results.
“Our fight against corruption is focused and is ongoing and we are resolute and we have resolved that we are going to fight corruption until corruption goes under. We are happy that in this regards, we have a very good partner in China because we are aware and we know how China fought corruption and how China is fighting corruption.
‘’We have succeeded in nursing a very sick economy and very soon, Nigeria will come out of recession,” he said.
Alhaji Mohammed, who said the signing of the MOU will further deepen the already excellent relationship between the two countries, expressed optimism that some provisions of the MOU that encourage the news agencies of Nigeria and China to reflect, in their reporting, the social, economic and cultural development in both countries, will eliminate the phenomenon of fake news. 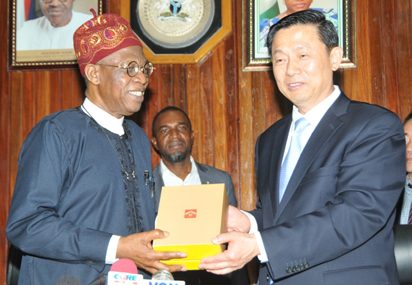 “This is significant because we are today in the era of fake news. Unlike China, the Social Media here is completely unrestrained. Therefore it is important that you get your news directly from the official source,” he said.
The Minister sought the support of China towards the training of the Ministry’s Resident Information Officers on modern Governance Public Communication methods in order to build their capacity as the respective spokespersons of Ministries, Department and Agencies.
Mr. Weimin said his ministry will scale up the broadcast of news about Nigeria in China and appealed to the Minister to reciprocate the gesture.
The Chinese Vice Minister acceded to Alhaji Mohammed’s request for the training of the Resident Information Officers and said the Chinese Ambassador to Nigeria will fine-tune the capacity building engagement.
Mr. Weimin was accompanied by the Chinese Ambassador to Nigeria, Dr. Zhou Pingjian, to the signing of the MOU.