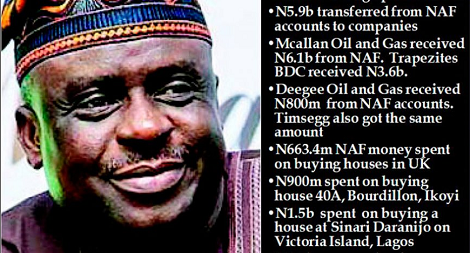 Justice Mojisola Olatoregun made the order based on an ex-parte application by the Economic and Financial Crimes Commission (EFCC).

The judge ruled: “An interim order is made forfeiting to the Federal Government of Nigeria the total sum of N2,244,500,000 found and recovered by the commission from the first respondent (Amosu) which sum is reasonably suspected to be proceeds of unlawful activity.”

The judge granted an interim order for the temporary forfeiture of N190,828,978.15 recovered from a former Nigeria Air Force (NAF) Director of Finance and Budget Air Commodore Olugbenga Gbadebo.

EFCC said the sum “is reasonably suspected to be proceeds of unlawful activity.”

The judge directed EFCC to publish the interim order in The Nation and The Punch  so that the respondents or anyone interested can show cause as to why the final order of forfeiture should not be made in favour of the Federal Government.

Justice Olatoregun made the order on June 7 after the ex-parte application was moved by the EFCC’s lawyer, Mr Rotimi Oyedepo.