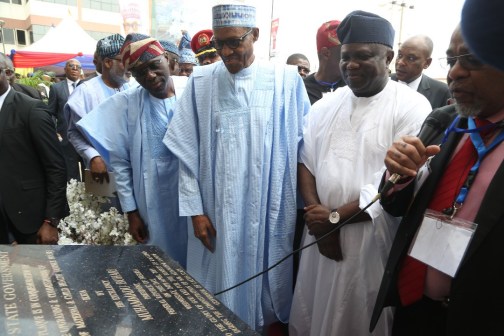 Lagos Last week witnessed a gale of commissioning of all the mega projects of Gov. Akinwunmi Ambode. One of them was the commissioning of new buses. Under the Bus Reform Initiative, 5,000 new buses are expected to be added to the public transport system, while other components of the scheme such as modern bus terminals, bus depots and bus stops are already springing up in strategic locations across the State. Now, 820 buses have been procured and were launched under the initiative expected to commence in May 2019. Part of the unique feature of the initiative is its Intelligent Transport System mechanism of the initiative, which will aid Lagosians to plan their journey.

Also, an arrangement is also being firmed up as part of the short-term plan for the buses to be assembled in Lagos, which would, in turn, create jobs for the people, and as well serve to properly maintain the buses.

Giving rationale behind the initiative, the State Governor, Mr Akinwunmi Ambode, said the new buses and terminals were conceived to redefine public transportation in the State with the view to make the State globally competitive.

Also, The Eko Theatre is a sterling concept by the Ambode administration to provide a viable platform for youths to harness their creative minds and potential. Now, four new Theatres have been completed in Ikeja, Badagry and Alimosho and Epe and were inaugurated for public use.

With 65 per cent of the Lagos population below the age of 35, Governor Ambode believes that the coming alive of the facilities would afford youths opportunity to be more creative and then open the space for them to be able to showcase their talents.

The theatres are also part of the State Government development plan for the tourism sector as the facilities are expected to attract visitors from within and outside the country when it comes fully on stream.

There is also the Oshodi Transport Interchange. In 2016, Governor Akinwunmi Ambode unveiled the Oshodi Transport Interchange designed to transform Oshodi to a world-class transport centre and end all notorious activities in the area. The interchange was constructed on the Public-Private Partnership (PPP) arrangement. The interchange has 18 lifts; 6 each for the 3 terminals that are equipped with CCTV, with the capacity to enable one to predict when a bus would arrive at the terminal.

The Interchange has 3 terminals. The first terminal will cater for inter-city transportation, where all buses going out of the state will take off and drop passengers on return. The second terminal will be solely for the Bus Rapid Transit, BRT scheme, that will cater for passengers commuting from Oshodi to Abule Egba, Okokomaiko, LASU and so on.

The third terminal will cater for passengers navigating Oshodi to Ikoyi, Lagos Island, Surulere, Victoria Island, Ikorodu, among others. The Oshodi project will also make provision for a mega shopping mall to be built through a Public-Private Partnership, PPP, agreements at the third terminal. The three terminals will serve 1,000 modern buses. The terminals will also have 1,000 light effects to project the aesthetics of the ambience.

Like the Transport interchange, the reconstruction of the Oshodi International Airport Road has completely changed the face of Lagos forever.

Others include the removal of existing Pedestrian Bridge at Ajao Estate and construction of Pedestrian Bridges at Ajao Estate and NAHCO/Hajj Camp, construction of Slip Road. Residents in the area are already benefiting from the project as travel time has drastically been reduced in and out of the airport, while the 10-lane superhighway is also a beauty to behold, especially at night.