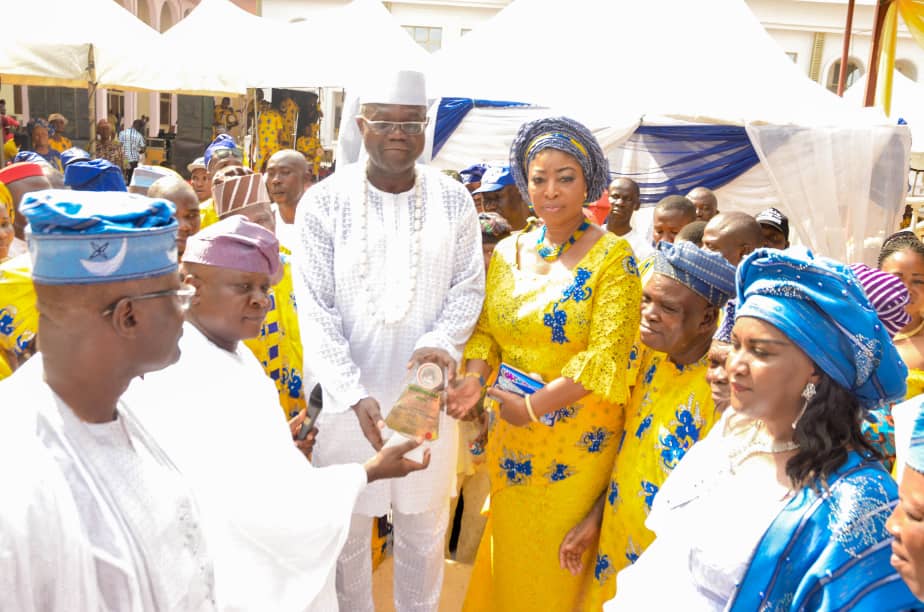 The 2018 Ikorodu Oga day might have come and gone but there are several memorable moments in the weeklong event; one of them is the special honour and accolade given to High Chief Owolabi Salis, the gubernatorial candidate of the Alliance for Democracy (AD), on Saturday, November 17, 2018.

The event which was held at the Palace of the Ayangbure of Ikorodu, Oba Abdulkabir Adewale Sotobi had the crème-de-la-crème of the Ikorodu indigenes in attendance, was the 27th edition and amongst several businessmen, political icons, religious and economic leaders and philanthropists, Chief Salis was singled out as the Ikorodu Oga man of the year merit award winner.

Governor Akinwunmi Ambode who was ably represented by the Commissioner for Physical Planning and Development, Prince Rotimi Ogunleye delivered a goodwill message to the people and praised Chief Salis for his contribution to the development of Ikorodu community, Lagos and the African culture at large.

He was also saddled with the responsibility of presenting the merit award plaque to Chief Salis.

Speaking further, Gov Ambode promised to partner communities in other to keep Lagos as the prime state of Nigeria and also continue with the sustenance of the visible developmental projects across the state.

Chief Owolabi Salis, a lawyer, accountant and philanthropist per excellence according to the Ayangbure of Ikorodu, Oba Sotobi, has over time proven to be a son of the soil indeed, having trained over 5,000 Ikorodu youths in different industries and ensured that they not only became gainfully employed but also employers of labour.

The Ayangbure further stated that his contribution towards the building of the new palace which also hosted the 2018 Ikorodu Oga day was so enormous.

Otunba Ganiu Olusegun Abiru, Chairman of the Ikorodu Oga Development Association while delivering hiswelcome address noted that although no political ambition was bigger than the peace and progress of the community, the association decided to honour Ikorodu indigenes who have had huge impacts in the lives of the old and young and no other person fits into this shoe better than Chief Owolabi Salis in the year 2018.

Chief Salis while speaking with journalists expressed gratitude to the Ikorodu Oga Development Association, IKODASS, the Ayangbure of Ikorodu, Oba Adewale Sotobi, Gov Akinwunmi Ambode and the entire Ikorodu community for giving him the platform to serve his fatherland and recognising excellence.

He also promised to do more not just in Ikorodu his home town but the entire state of Lagos if he gets the opportunity to serve in the capacity of the governor of the state. He noted that it his desire to see Lagos residents and indigenes live the life of affluence they so deserve and promised to bring the commonwealth of the masses into play in terms of provision of basic amenities in the state.