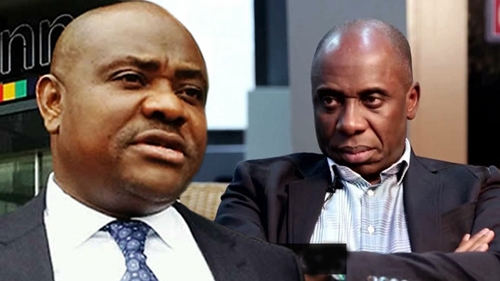 Governor Nyesom Wike of Rivers State has listed his arch-rival, Minister of Transport, Rotimi Amaechi, among several persons to be honoured by the state.

The Minister of Transportation, Chibuike Rotimi Amaechi, is among the several high profile persons to be honoured by the Governor Nyesom Wike-led Rivers State government for their individual contributions to the development of the state.
According to Premium Times, a list of honourees prepared by the Jubilee Anniversary Committee set up by Gov. Wike, had Amaechi’s name at number 18 amongst 29 people to be awarded Grand Service Star of Rivers State.
Meanwhile, former Nigerian leaders, Goodluck Jonathan and Yakubu Gowon are also on the list, alongside late activist, Ken Saro-Wiwa, who would be honoured posthumously.
The awards ceremony is slated to hold on May 27 in Port Harcourt, the Rivers state capital, according to the program pamphlet.
It was not immediately clear if the minister would accept the honour or personally show up to receive his medal from Gov. Wike, with whom he’d been locked in a bitter political contest for more than three years.
Amaechi who served as governor of Rivers State from 2007 to 2015, revealed through his spokesperson, David Iyofor, that he was not aware of his principal being identified amongst those to be honoured.
The award comes even as Gov. Wike appears to intensify attacks against his predecessor. Within the last few weeks, the governor has levelled many allegations against the minister.
On Monday, the governor accused Amaechi of raising a cult militia in the state, to prepare for 2019 elections, and Amaechi has denied the allegation.
Governor Wike to Honour Rotimi Amaechi with Top Award in Rivers State was last modified: May 24th, 2017 by Arinze Ago