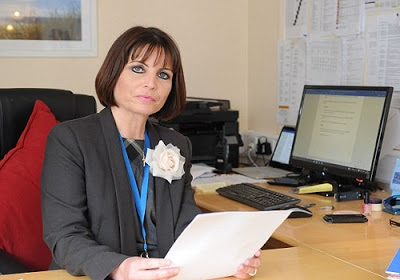 A head teacher who is about to quit her job has blasted parents in her resignation letter, saying they are undermining school discipline by backing their unruly children.

Louise McGowan criticised a lack of respect for rules among some children ahead of her departure from Walderslade Girls’ School in Chatham, Kent this summer.

She hit out at parents who seemed to support their children’s rule-breaking, even after the youngsters had been shown to have misbehaved.

Ms McGowan wrote the letter to parents after five pupils were expelled from the school this year.

She wrote: ‘The fact five students this year have lost their places is unprecedented but I will not tolerate and never will tolerate extremes of poor behaviour that risk spoiling the school and the valuable education it provides for the majority of really wonderful students that attend here.

‘More students now are ignoring the school’s rules on use of mobile phones, choosing to openly use them in front of staff without fear of consequence, refusing to comply with instructions to put them away and often refusing confiscations.

‘We had several incidents where parents actively fought on behalf of the child against the school, even when it has been found through investigation evidence their child was in breach of the behaviour policy.’

She said the behaviour of most pupils has been ‘exemplary’, but that there has been ‘a growing number of students who do not believe the school has a role or a right’ to tackle bad behaviour.

The letter added: ‘It is simply not acceptable for a parent to argue when their child has clearly been in the wrong, has broken rules and found to have misbehaved or been rude.

‘Arguing and making excuses for their child only serves to fuel the undesirable behaviour.’

Ms McGowen has concentrated on discipline since taking charge at the school five years ago – banning all pupils from bringing in electronic devices.

Her school received a ‘good’ rating from Ofsted and inspectors said the pupil’s behaviour had ‘improved’.

But the head teacher has described ‘inexcusable attitudes from children, often starting at younger ages and worsening as children grow through teenage years’.

Head Teacher Blasts Parents In Her Resignation Letter Over Their Uncultured Kids [READ] was last modified: May 12th, 2017 by Reporter