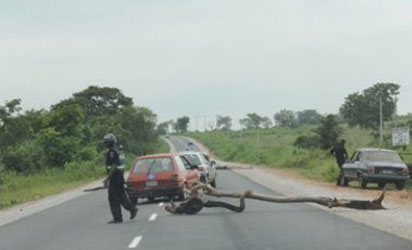 The House of Representatives, on Wednesday, adopted a resolution calling for the removal of multiple security checkpoints on roads across the country to facilitate free flow of traffic.
The house also urged security agencies to collaborate with one another in the discharge of their duties and avoid waste of resources through the erection of multiple makeshift roadblocks.
The resolution which was unanimously adopted by the members followed a motion under matters of urgent public importance and sponsored by Rep. Obinna Chidoka (Anambra-PDP).
Chidoka said multiple roadblocks were causing unnecessary traffic congestion and hardship to road users.
According to him, the security checkpoints mounted with used tyres, logs of wood and metal barricades are often abandoned on the highways after operations.
He said the items often created hazards for unsuspecting motorists, especially at night.
“And in some cases, the abandoned make-shift roadblocks and checkpoints are reportedly used by armed robbers who attack and terrorise road users at odd hours.
“In most cases, these roadblocks are only two or three kilometres apart with one clearly visible from the other,’’ Chidoka said.
While calling on the Federal Road Safety Corps (FRSC) to remove all abandoned vehicles on the roads, Chidoka also urged the corps to position ambulances and towing vans at major intersections.
He said this would help in providing help to victims in case of road crashes.
In his addition to the debate, the Minority Whip, Rep. Yakubu Barde, reiterated the need for the security agencies to deploy modern technology while dealing with motorists.
According to him, the manual method of stop-and-search of motorists is obsolete, adding that in many occasions, motorists are harassed and intimidated.