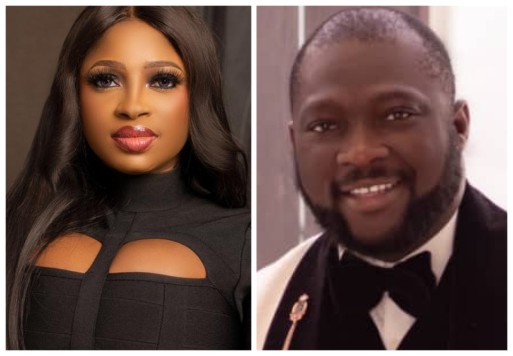 •Gists From The Glamours Event

It was a gathering of stakeholders in Ibadan business, corporate, social and political circles last week Sunday (17th October, 2021), at Mauve 21 Events Centre, Ring Road, Ibadan. Where the oldest celebrity magazine in Nigeria, City People honoured some young entrepreneurs who have distinguished themselves in their various chosen fields, at the maiden edition of City People Ibadan Young Entrepreneurs’ Awards. The event, according to the Publisher/Editor-in-Chief of City People Magazine, Dr. Seye Kehinde, was put together to honour and encourage young entrepreneurs (both male and female) who have set up businesses and run them profitably over the years. At the award program, 42 young entrepreneurs were honoured for their outstanding contributions to their various sectors, which cuts across Fashion & Beauty, Banking, Entertainment, Advertising & Branding, Oil & Gas, Agric Business, Security, Real Estate, Events & Interior Decor, Tailoring etc.

The well-attended event, no doubt, was glamorous and colourful. A good number of top celebrities from all walks of life graces the occasion. The atmosphere could be likened to a Hollywood event. From the settings, props, lights and decorations everything was excellently put in place. City People’s Correspondent, DARE ADENIRAN, the brain behind the award program, in this report, captured the behind the scene gists from the elaborate and beautifully packaged event and why its memories will live long not only in the minds of the awardees but also the eminent personalities who graced the event. Read the excerpts.

THE EVENT AT A GLANCE

The maiden edition of City People Ibadan Young Entrepreneurs’ Awards ceremony was a bang. It attracted people from different sectors in Ibadan and beyond. Apart from the lavish decorations and the beautiful ladies from Wole Sawe’s Exquisit Ushers, the event also showcased some talents who held quests spellbound with their electrifying performances. Da Crystals Dance Academy, an Ibadan based dance group and another cultural group, Akanjiamoke Entertainment from Oyo gave brilliant accounts of themselves at the event. The event started with red carpet section during which guests were interviewed on the red carpet and also took turns in taking photographs at the photo arena just by the entrance of the hall with pictures of awardees at the background. It was indeed a colourful scene. None of the guests wanted to miss the moment and the paparazzi that followed. The event proper kickstarted with City People’s publisher, Dr. Seye Kehinde’s remarks, after an opening prayer by a popular TV Presenter and anchor, Princess Bunmi Labiyi. Prince Adewuyi’s OB Security men were in charge of security at the event. D.J Gavpop was on the wheels of steel. Ripples Catering provided small chops for guests.

City People Ibadan Young Entrepreneurs’ Awards is aimed at celebrating value and excellence in some youths who have distinguished themselves in business. It’s also a way of encouraging the aspiring youths, to let them know that indeed, there is a reward for diligence and hard work.

In his opening remarks City People publisher, Seye Kehinde gave more insights into these. “We are gathered here to honour youths who we think deserve our commendation. It’s an evening of entrepreneurship, an evening of entrepreneurs and an evening of people who took the courage to set up outfits, companies and organisations against all odds. You and I know that it’s almost impossible to set up a business today and run it profitably. But here gathered this evening ladies and gentlemen who have done so well in setting up businesses and still keeping these businesses alive.”

ABOUT THE LOVELY DECORATIONS

Apart from the fact that the event was excellently organized and well attended, another key point was the beautiful decorations both inside and outside the hall. Favour Essang of Dexterity Plus did wonders with the Black and Gold decorations of the hall. While Azeez Titilayo Yemisi of Zeeza Events lavishly decorated both the red carpet and photo arena with lovely flowers and lights. Broadnet Multimedia Concept also helped in brightened up the two areas. The decorations and lights and the red carpet were magnificent scenes to behold.

WITH LOVE FROM OYO NUJ

Chairman, Nigerian Union of Journalists (NUJ), Oyo State Council, Comrade Demola Babalola was one of the prominent guests at the event. He was there to honour City despite his very tight schedule. He didn’t come alone, he was there alongside powerful members of his Exco.

The South West Group of Online Publishers (SWEGOP) was not left out of action at the event too. The able Chairman of the Group and the Publisher of Parrot Xtra Magazine, Olayinka Agboola was fully present. Other members of the Group at the event include Remi Oladoye of National Insight and Sikiru Akinola, Publisher of Oyoinsight.com. They all came to support their own, Dare Adeniran.

3 HOT LADIES WHO DAZZLED AT THE EVENT

Though there were lots of beautiful ladies at the event but there were these three of them that really dazzled. They were the cynosure of all eyes at the event. While Bunmi Odumosu, CEO, Slayers Corner caught people’s attention for her astonishing beauty and curvy body structure, Mary Odanye of Marybell Newlook Boutique almost caused a commotion with her huge backside as she walked down the aisle to receive her award. She looked fabulous in her Gold flowing gown. Meanwhile, many couldn’t take their eyes off Ebunoluwa Akinwale, CEO of Nature’s Treats’ glowing skin and beauty too. These are all married women and mother’s but still, pay attention to their bodies and beauty. They were really the hottest babes at the event.

The maiden edition of City People Ibadan Young Enterpreneurs’ Awards 2021 couldn’t have been successful without the concerted effort and commitment of some people, especially Canwest Media and the local committee. These are the brands that supported the event in one way or the other. On the list are Mauve 21 Events Centre, Able 2 Productions/Able TV, Deo Reality of Femi Odewole, Dexterity Plus, OB Security, Exquisit Ushers by Wole Sawe, Broadnet Multimedia Concept, Lypix Photography, Canwest Media, Zeeza Events, Bankyloolas, Ripples Catering and Events, Saphyr Events, Blue Nun, Coca-Cola DJ Gavpop, Box18 Media and Goldmender Global Investment.

It’s no longer news that City People is 25. In fact, it has been a celebration galore since the beginning of this year. The Management of the magazine has earmarked different activities to mark this milestone achievement. It’s a while year celebration. Little wonder that an anniversary cake was cut at the maiden edition of City People Ibadan Young Entrepreneurs Awards. The beautiful Cream and White cake, with City People’s logo boldly embossed on it, was designed by Exquisito Ccnfectioneries boss, Adeola Layade (Azaria). She also supplied cupcakes for the enjoyment of guests at the event.