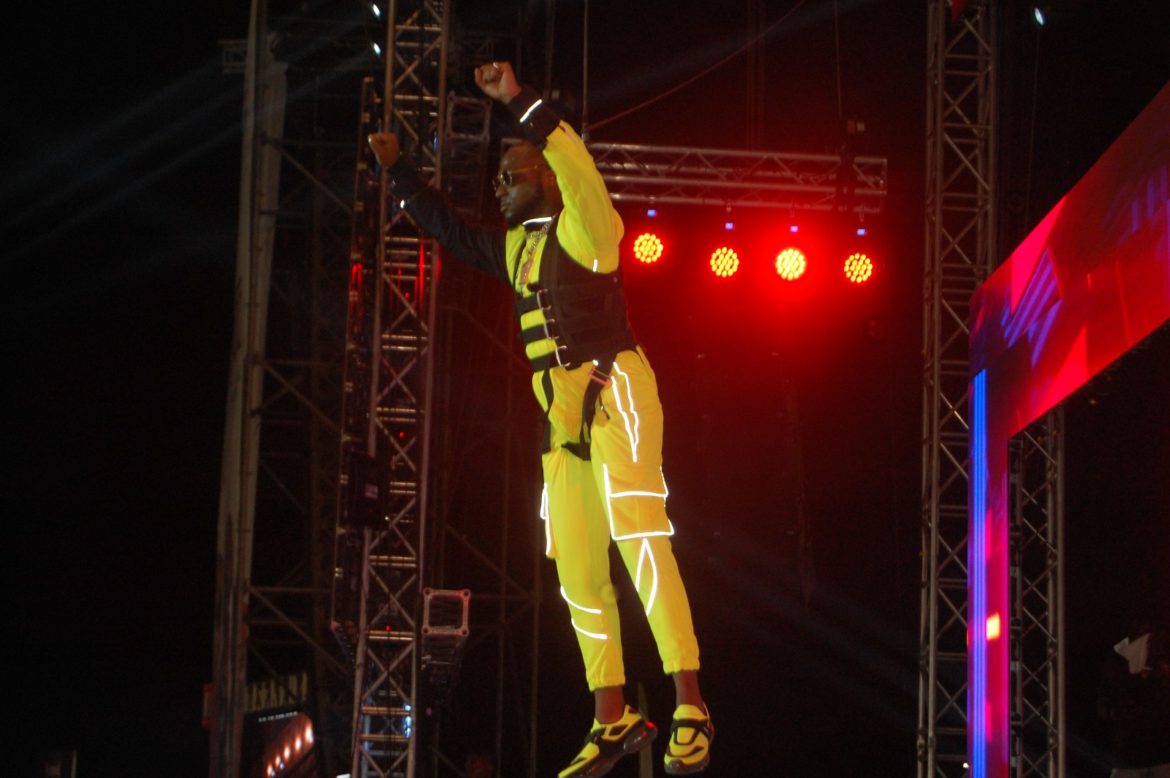 Davido, the self-acclaimed star king had his concert on Thursday 27th December, 2018 at the Eko Atlantic Centre, and Ehiz the Dada Boy was the host. DJ Ecool was his official DJ. The show was almost a toast for Davido but he still struggled like a man to make his way up. Davido planned his Davido Live In Concert in just 12 days and on the morning of the event the regular tickets (5k) was sold out. The event kicked started at 9pm when all the fans were already on standby waiting for Davido to entertain them but it did not look like he was coming on stage anytime soon.

Other artistes like Soft came on stage and performed the hit single he had with Davido and other hit tracks. Terry Apala came on stage to thrill the fans with his amazing voice. When he was called to come on stage the joy from the crowd was so intense especially from the girls, they screamed their lungs out, like if they got hold of Apala what they would do to him would be a story for another day.

Brodashaggi the entertainer, the Instagram big boy who has taken over Lagos with his popular slang “Hit Me”,  came on stage to perform with his guys. He performed “Amaka” the song by 2face and Peruzzi then he drummed on stage and the crowd screamed because they never knew Shaggi was such an amazing performer, Aunty Shaggi came on stage to ask Shaggi some questions like what their Instagram skit interprets. The whole crowd loved their performance and wished for more from them. After Shaggi’s performance, some music was played and the hype man did his thing.  The event started to get boring but Barry Jhay came on stage and brought back the excitement with his performance. The security at Davido’s Concert was tight as they secured everywhere. They had different tags to access you to a particular place. Even most of our celebrities were bounced out if they had no tags on them. His stage was very high and cute, fans could not get on top because it was very high. They had an artist village and food and drinks were served to the media, artiste and dancers behind the stage. Davido really did take care of his guests.

At a point, the concert began to get rough because the bouncers stopped people from entering the Eko Atlantic, so many fought to make their way in but if you manage to pass the main gate you would not be able to pass the second gate to the regular session.

They had artistes lined up to perform but they didn’t work with the managers of the artistes lined up because things got muddled up in the process, DJ Cool was still entertaining the crowd with good music and the Hypeman was doing his own thing too.  The Hypeman announced that the 30gb gang were in the building with 9ice, Duncan Mighty, Skibii, Rekado Banks and Sean Tizzle. After 10 minutes, special perch who is said to be his official Hypeman came on stage saying the crowd should wait a little bit that Davido will be here  since he was there, that anywhere you see him you see Davido.

He still stood on stage talking and talking and Davido was yet to appear, the crowd started throwing things at Special Perch, which means they wanted him out already but he still did not leave. He said to them that if they kept throwing things at him Davido will not come on stage. From the back stage, Davido used the holla at the audience.

The crowd already had standby cameras waiting for him to come out, and within a blink of an eye, Davido was seen coming in a cranedown the stage. The fans screamed so hard, they were so surprised that Davido could do that, even though when he came down he confessed that he was  also very scared.

He took his crowd through his old songs and brought them back to the new era, the fans kept feeling him and all was going so well. He was presented a gift by one of his fans. He collected the gift and said thanks, not minding to know the particular person who gave him the photo. A young lady was noticed carrying a picture of herself up whenever Davido sang close to the side she was. What we  don’t know is why she should be putting up her picture for  Davido, Davido would have remembered something if he saw the picture or her but Davido did not notice the fan at all, he was concentrating on his performance and entertaining the crowd. Davido went to have a break and change of cloth then DJ Cool left the DJ stand for DJ Neptune to play for a while, DJ Cool entertained people by dancing on stage with Special Presh and Dada Boi.

9ice came on stage with Davido to perform the song they have together, after performing the song, 9ice said Davido is his blood that he might be acting like the street but he is not street and Davido replied” I have been listening to 9ice since I was in high school”. After 9ice left the stage he brought his Uncle on stage and said to his fans, “here is my Uncle Ademola Adeleke, vote for him, he is the right Governor of Osun State.”

Reminisce came on stage and they both rock the stage together, then Oladipo joined them on stage to perform his hit single. MC Galaxy came on stage to meet Davido and they performed the song that brought him to limelight, MC Galaxy begged the crowd to help him thank Davido for making him who he is today.

Davido called Ice Prince to perform with him on stage and the fans were so happy to see Ice Prince, when he came on stage, Small Doctor appeared on stage to thrill fans at Davido Live In Concert with his amazing way of entertaining fans. Duncan Mighty also came on to perform his hit single Take Love and the fans were singing word for word with him, Duncan Mighty gave out money to the crowd saying he could not come for the event and leave without giving out money to the fans. Idowest came on stage to thrill fans with his hot performance of “Shepeteri” and “Who” his latest single, which the crowd sang word for word with him.

Special Presh came on stage and asked the crowd if they were ready for Mayor of Lagos, they screamed so loud the energy from the crowd  was intense. He came on stage with Peruzzi. Yonda and Dremo came on stage to perform together, this was obviously the best performance of the night. Davido went back to make another change of clothes but on his way he had a little fight with Kiss Daniel’s Manager.  He poured a drink on him and slapped him and said “don’t fuck with me”. He came back on stage, performed “Bobo” with Mayor then he performed “One Ticket”, which is owned by Kiss Daniel and he was only featured on the song. Falz the bag guy came on stage and stole the show. The fans acted like it was Falz they were all waiting for. They both performed Bad Baddo Baddest together, when it got to the point where he usually says “Mr. Dele Na My Boy” the crowd thought he was not going to say so but he did and even screamed it so loud for everyone to hear him.

He brought his two daughters on stage and said the crowd should give shout out to his pretty daughters. Afterwards, Chioma came on stage and he performed “Assurance” while Chioma sat on a chair on the stage.  After his performance he gave a shout out to all the boys in the building. Mayorkun has this special Police Officer that goes around with him. He shoots his gun pointing up whenever Mayor is about to leave any event. At Davido’s concert, he shot into the air and the bullet almost struck someone.

Davido said to his fans “I am about to bring out my only friend in the industry” Oluwa Burna Boy. Burma Boy came on stage, hugged Davido and performed his hit songs “Yeye” and “Gbona.” The crowd was so happy that Burna Boi came around, he sprayed money on stage to his fans in the crowd, not just naira but dollars. The crowd scrambled for it and almost wounded themselves in the process, breaking bottles and even stole a lady’s phone in the crowd. But he promised the fan that he would do something about it. The fan even took him to Instagram saying, “Davido looked me in the eye when I was robbed and said he would do something about the phone”. He performed Nwa Baby and said good night to his fans and promised to see them next year at the same venue same date.

How DAVIDO Dazzles Fans In LAGOS was last modified: December 30th, 2018 by Reporter