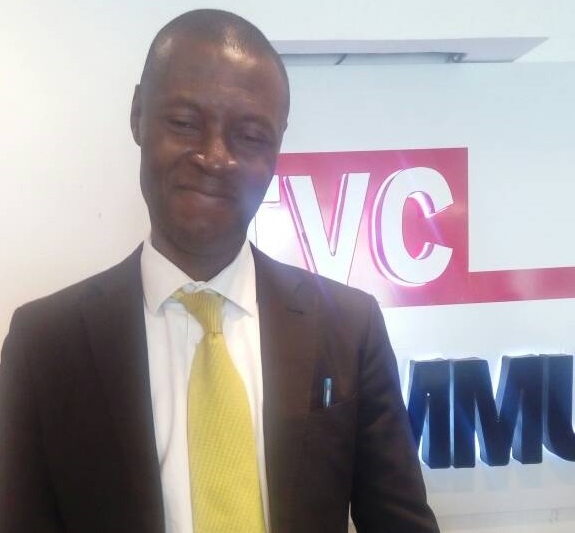 Media practitioner and sports analyst Solomon Ajuziogu  runs football commentaries with relative ease. He is one of the few commentators in Nigeria who have covered international games. His expertise and act of professionalism  on the job is second to none. Surprisingly, he started the trade of running sports commentaries at the tender age of 13 even as a Junior Secondary School pupil.

Since then he has gotten many professional certifications in sports commentary and journalism.  Apart from delivering qualitative  sports commentaries Solomon Ajuziogu also presents and reads sports news on TVC.

In this interview with FEMI FABUNMI, he speaks  on life as a TV presenter, sports analyst and commentator and lot more.

Give us an insight into what you do ?

I am a sport buff, a mass media and communication guru,  I have soft spot for talking religion, moral codes and ethics. I am really interested in the science of sports. I ‘m crazy about sports because I played and thought I could play at the professional level although that didn’t happen. I love to affect people positively particularly helping people to get to their dreams. My talent lies in mass media. I discovered I could run football commentaries at the tender age of 13, maybe because I was exposed to radio early enough in life. I enjoyed listening to the likes of Ernest Okonkwo, Sebestian Offurum, Pius Osewengie,  Emeka Odikpo and many others who ran commentaries at that time. I was on a daily diet of radio listening at that  tender age . At some points I started mimicking Ernest Okonkwo, I was practically copying him words for words and that helped me move forward.

When did you get your big break in Commentaries ?

Were you paid then ?

Not really, but I got gift items and some other things. However in Bariga where I lived back then,  I ran football commentaries for a neighbourhood football competition . It was called mock Nations cup. Many professionals were coming to play, it was a big tournament. I walked up to the organizers of the tournament and told them I could add colour to their competition, they had collected gate fees and all that. I didn’t even bargain with them I was paid 25 naira for that in 1988. I went home and showed it to my parent. It was then I knew that running commentaries  is what I am cut out to do.

When did you fall in love with running commentaries.?

Is it a matter of falling in love ? it was a case of making use of one’s talent. I discovered that’s what I could do and I pursued it. For someone who didn’t have any formal training, I only studied those doing it on radio then .The very day I tested my ability to run commentaries was when Abiola babes played Club Africain at the CAF Cup it was that day I started running imaginary commentaries. It was a profession many people weren’t interested in. Again my English were almost flawless and impeccable ,I did it same way Ernest Okonkwo was doing it. The experience was fantastic in every sense of it.

Is it safe to say that late Ernest Okonkwo inspired you to run commentaries ?

I would say yes he did but unfortunately we didn’t get to meet before he passed on. I just imitated him just to perfect my skills. He had great power of description, he would describe what went on the pitch like though you were watching it. His choice of words and vocabulary was fantastic. Already, I knew I would end up in mass media because there is no way one will be involved in Commentaries and wouldn’t have a platform to work with. At a point I was running inter house sports commentaries, it wasn’t just football ,at a point i moved over to athletics. I have also done basketball and other things. When it was time for me to try university education I knew I was cut out for mass communication. I eventually continued doing my thing at the university of Lagos where I read Mass communication.

When did you get your first break in football commentaries ?

I would say that the biggest commentaries I ever run was the 2009 FIFA under 17 competitions hosted by Nigeria. I ran commentaries involving Spain vs Burkina Faso and many other games. I was involved in the final match between Nigeria and Switzerland infact I announced the goal of the match. In 2002 I was also in commentary box with Emeka Odikpo , he is one of my idols too. It was when Vincent Enyeama got his debut for Nigeria in the 2002 Worldcup qualifying  match against Kenya. He was introduced to the pitch in the second half and I knew he was going to be a Super Eagles material. However, I still maintain that the competition that gave me my biggest break was that under 17 competition.  As at then I was not a staffer of FRCN but I was considered despite the fact that they have the best trained staff in running commentary, they still accommodated me.

Do we still have young commentators ?

Yes but not as many as it used to be. FRCN started coaching Fem, Farawe and Damilola Onifade. There is a dearth in the number of young people running commentaries as of now.

What is your take about young commentators trying to imitate the foreign ones ?

When you listen to foreign commentators you will agree with me that those guys understand  the rudiments and techniques of running commentaries, they have their trade well cut out for them. I remember when I was in Kano covering Burkina faso vs Spain. I met a young man younger than me who had already resigned from BBC to focus on commentaries .After the match between Spain and Burkina faso he jetted out of the country to cover another champions league match in Italy.

Tell us how you ventured into broadcasting ?

First I already knew running commentaries would take me into broadcasting. When MITV was established I was working with world wide sports and we bought airtime on MITV. I was tried but I didn’t exert a lot of effort but they manage to put it on air it was an audition that I failed. I was in VON as an artiste and presenter for four years. I also got another chance with 60 minutes ports on MITV. Apart from sports presentation I also did little acting on radio with VON and FRCN. From MITV we moved to AIT in Alagbado, when I left University of Lagos I met Tayo Balogun and he took me to Channels. I am a media man , so I can function properly in areas like Public Relations, Advertising and other media related jobs. At a point I worked briefly with the BBC , I did some MC job. In 2010 I Joined City FM as a pioneer staff and I left in 2011  when  I joined  the services of TVC.