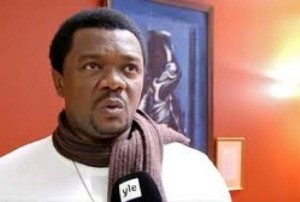 He is a popular Yoruba actor who plays very daring roles but Kelvin Ikeduba is not Yoruba. He is Delta Igbo who grew up in Lagos. Kelvin was born on August 21st, 1976 in Ebute-Metta. He is from Delta State. Widely known as the ‘Bad Boy’ in Nollywood, he is one of the few stars  that act in both Yoruba and English movies. Kelvin has lived all his life in Lagos. He is an Economics graduate of Ahmadu Bello University Zaria.

Kelvin grew up on Olokodana Street in Ebute-Metta (West). He’s a very creative and imaginative storyteller. His interpretation of roles is always punctuated with lots of dramatization and that makes it more interesting.

Kelvin started acting in the year 2000 and has remained a force to reckon with both in the Yoruba and English circuits, having featured in quite a number of movies.

Recently, he met with the duo of City People Publisher, SEYE KEHINDE and Assistant Editor, SUNDAY ADIGUN, and he revealed how he accidentally started acting and made it big in Yoruba movie industry despite been an Igbo.

How has it been coping with your tight schedule in the movie industry?

I started in year 2001. The journey so far has not been easy but today I give God the glory. When you talk about coping with tight schedule, I am the type that really love to give myself space and I don’t overwork myself. So I am managing life, I know how to manage my schedules.

Ever since I know you have always been playing rugged roles?

How did you move in the direction of Yoruba movies considering the fact that you are not Yoruba? What was the attraction?

Yoruba movie industry is very favourable to my career. Everyone knows that Kelvin Ikeduba is an English actor and he is not a Yoruba person. For you to speak a dialet that is not yours, to act and get accolades that you are doing a great thing is an added advantage. When opportunity comes to move into Yoruba movie industry, at first I was sceptical if I would be able to do it, because I know that speaking and acting with another language is a bit different. But at the end of the day, I was able to blend. I am really happy for the Yoruba thing. It is a big milestone in my career. I say it everywhere that when I started acting Yoruba movie, I was more a known upcomer in the English industry. Yoruba movie gave me the platform to stardom.

How easy was it? Do you learn how to speak Yoruba fluently?

There was no time in my life I planned to be an actor. I never taught I was going to become popular. From day one I have always been a great fan of Nollywood movies be it Yoruba, English or Ibo. On this faiithful day that was in year 2000, there was a friend of mine who always comes visiting and met me watching movies. He started teasing me, calling me home video boy. He said there is a place he knows in Surulere where all  these stars always hangout, that if I don’t mind he can take me there, and we went there the following day.

Can you still recollect those faces you met there that day?

Ofcourse, when we got there, there were so many crowd. The first actor I saw was late JT. Tom West. I saw Ernest Azuzu, Eucharia Anunobi, Sandral Achums and many others. One funny thing happened that day while I was snapping, meeting all the celebrities. At a point where I was relaxing and feeling cool, feeling like an actor, somebody just walked up to me and asked me to give them my name. I asked “what do you need my name for?” And he said, are you not an actor?” I said yes I am an actor, my name is Kelvin Ikeduba. He said okay, no problem, come back tomorrow by 2pm, that we will go to Singapore Hotel to shoot a scene, starring Kenneth Okonkwo, Pat Attah, Eucharia Anunobi, that we are having a party in the movie and we would need more casts. That was how the whole thing started.

So you acted in English for how many years?

While I was doing Yoruba, I was still in English, just that at a time, like I said I was a known upcomer in the English industry but when Yoruba now gave me the opportunity to start playing leads, that was when I now left English for a while to pay more attention and diversify to something else which is more challenging. But I said to myself.

Let me set a record, let me be a pacesetter, let it be the first time we have a cross over artiste who is relevant in English and Yoruba, that was how I took up the challenge.

How did Yoruba opportunity come about?

My friend Femi Ogedengbe told me that I don’t have to be doing only English since you understand and speaks Yoruba. I told him to always inform me anytime there is opportunity even if its just a scene. As God would have it he called me 3-days after that Saheed Balogun was filming “Mafi Kangbakan” and we should come and do one scene. I went there, we did it, Saheed was like wow. And I was like for this guy to give me accolade that means I tried. The movie came out, people like it. From there Akin Olaiya gave me a job through Lala, then I did Ogidan, the Murphy Afolabi movie “Ibosi Oru”.

Can you recollect the one that launched you out?

The first one that really launched me out was Ogidan. But the one that shot me into limelight is Ibosi Oru by Murphy Afolabi.

What really inspires the way you interpret your roles?

I would say my inspiration comes from God, apart from that, I believe that anything that is worth doing at all,  is worth doing well. I love to be acknowledge as one of the best in the job. That is why I take any job I do be it Yoruba, be it English too personal like my job. I believe if you put in your best in a movie that sells and people like it, the producer will always come back for you, because people appreciate good job.

What were the changes you noticed when you started and now?

A whole lot. I have to be very sincere with you. The first and foremost is our stories now. We don’t have classy stories again. Yoruba industry was known for fantastic stories, but now the quality of the stories have dropped.

Another things that, then, people used to take time to do good job, actor stays in location for 20 days and more, but now no actor would stay 7 days in a location, including myself. We would be hurrying the producer and the director that we have other jobs to do although it gots to do with the economy of the country too. I started with waka pass and we were been paid 1,500 then, but I am very sure today they don’t even pay them because producer thinks if they don’t agree he can go to one neighbourhood, gather people and achieve his aims. A whole lot has really change. We don’t have classic again. See movies like Living In Bondage, Igodo, Ti Oluwa Ni’le, Ori etc. It is been a long time we see stories like that.

We need to work more on our stories. We need to employ more fantastic story writers. We need to do researches too. I believe we have not even start writing a good story in Nigeria, because there is a lots of stories.

How did you come about “Dr. Follow Come name in a movie?

The truth is I have passion for acting. That movie is by Itele. When I got to the location he said to me “Baba you are the one playing don o” but he want something different. And that was it.

Marketers are complaining that movies are not selling. What do you have to say to that?

It has been on for long that movies are not selling online TV now are making waves on Youtube and the rest of them. What most marketer do now is to sell small, after selling, upload online and make sales there too. The problem is not today, the problem started when they could not curb the piracy and now it is affecting all the sector of the industry including the marketers. By the time they say a movie is not selling today, an actor that is receiving 500,000 will not be able to take 500,000 again He will now have to manage 300,000. What I personally think they can do about is to reduce the influx of the movies coming out every week. In a situation when you have about 150 movies coming out in a week. It makes it too competitive. Nobody can buy the whole movie in a day. They need to regulate it and it will help a lot. Let’s say they release twice in a month, 15 movies on each chosen week and by doing so you can now tell marketers, don’t do more than 3 movies in a year. But in a situation when somebody doing 80 movies in a year it must definitely be like that, no matter the superstar you use.

Let’s talk about your marriage?

What was the motivation behind your online skits?

To be sincere the skits has taken me to another level. The whole thing started like a joke when we were doing Tade Ogidan movie. Arole now said to me “Baba you are very funny, lets do a skit” We did it and the said Baba be doing this thing now. So anytime I am with one or two people we will do it and that was how the whole thing started. So any day, any time, I keep thanking the guy, Woli Arole, he started it for me. Anytime the inspiration come and I have 2 or more around me I will do it. Funny enough, people are now beginning to see me as a comedian and you know acting to make people laugh is different from speaking to make people laugh. That is the challenge now but we are coping (laugh).