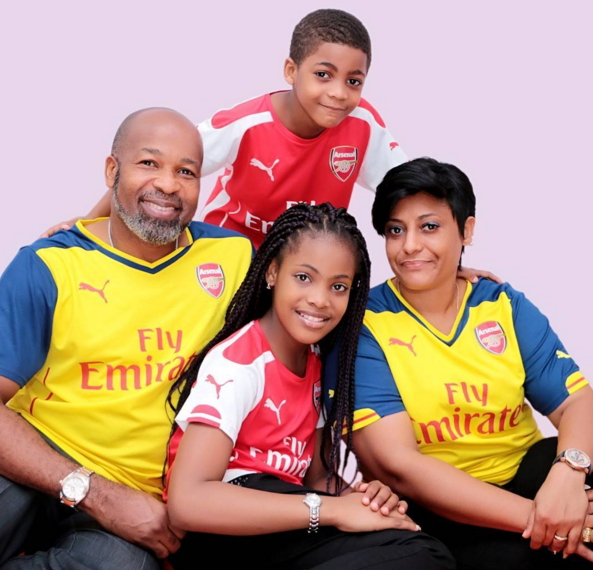 Some people believe that artistes (actor/actresses) don’t make a good and lasting couple. That, however, is not the experience of a star dramatist, Yemi Solade.

He found a good wife, a half-caste, who has brought an unexpected life-long value that outlines a changed, redefined existence with a new breadth of freshness soused in a new meaning of married life: Solade recalls his thrilling and rewarding journey since he tied the nuptial knot. Read him.

What is the secret behind your ageless look?

Ageless!!! It is in my Gene. We are all like this in my family. You need to see those Mama in their ’80s and ’90s in my family, you will be amazed. Nobody dies young in my family, and I don’t pray to go early too. It runs in my family. People have called me all manner of names, Casanova and all that. But you can’t take the fact, that, this is me, all you see is natural. I am a very domesticated person. I don’t go out, if there’s no good reason to go out.  I only socialise when it matters. I had to just be here. I was so happy when he (publisher) told me to Grab the Mic once. I love to perform before people. What I do is just to maintain what God has given me. I like to experiment a lot especially with the type of body God has blessed me with. So, the hereditary thing and beauty routine are also part of it. Because of that age thing, I had to leave my beards for years for professional reasons, because I got tired of acting the role of Casanova in movies. I have outgrown it.

The roles I feel I should be acting are going to people like Anta Laniyan, Akin Lewis and I was like where’s my pot belly and the grey hair too and that took time before they started coming. So I left the grey hair and teddy to attract the fatherly roles I am supposed to play. So, the look began to attract the desired roles I wanted until January when I decided to shave it off again.

How do you differentiate a professional script from amateur ones?

Where I flourish, which is the Yoruba industry, I build on improvisational acting. Madam Dearest was shot without a script. I played a major role. Tade Ogidan only gave a breakdown of the movie. It takes a talented actor who can improvise to flourish in movies shot in Yoruba language. When Tunde Kelani shot “ Ti Oluwa Ni Ile” in 1993, he didn’t have a script like that, up till when he shot “Ayo Ni Mo Fe”. It is possible to dish out anything as a professional. You need to match your pictures.

I will say I became a better actor acting without a script. I’m sure lots of you were surprised when I said “Madam Dearest” didn’t have a script.

For one to recognise a professional work from the front page, everything will be established, from the direction of the narrative. Once you start flipping through, you will know if it’s a professional script, from its dialogue, the arrangement, the mood, everything is detailed, you will not even want to drop it.

So, for the Yoruba movie industry, that is beginning to happen. I have been opportune to see scripts like that and I credited the producers. The narrative has changed. We have got to Cinema Culture now. Whether you like it or not, you must improve on your standard. People now involve professional writers to give them a synopsis of the story and he writes for you. Kunle Afolayan doesn’t joke with Tunde Babalola, an Ife boy. He does most of his scripting. That is what we are talking about. This is why we say, we need to go through professional training. You have the writers, technicians, directors and everybody. So, once you see a professional script, you will know, but in the Yoruba setting your ability to improvise is what will propel you, even if there’s a script, it is never detailed, because it is written by someone who doesn’t have a quarter of your knowledge. Take, for example, I’m a dramatist, so you can’t compare what I will look out for in a script to what just an ordinary actor will look out for. Things like a component of drama. But these days, if you visit cinemas, you will be proud of Nollywood. I don’t produce movies but I’m still relevant in the industry.

And I don’t like, “I call him, he calls me arrangement,” in movie production. Moreover, it is not compulsory for everybody to produce. Just pay me good money and let me do good acting for you. Any movie I play, a lead, you will surely feel me. Let me blow my trumpet. People still make reference to “Madam Dearest’ till tomorrow. These days, producers want to play lead roles in their movies. They want publicity. They want to be known.

Can you tell us the secret of your successful marriage?

My wife has made it work because she is content with me, seeing the potential I have, that I’m somebody if given a space to express himself will do well, and make good fortune for the family. She is one of my good fans. She manages everything and me. God practically dashed me that woman. At a point, I thought I was not cut out for marriage because I had experimented and it didn’t work. Then she came and  I looked at it and was like, Hmm half-caste. Will I be able to take care of her?

But I want to give it to her, Hannah Marsh. You are God sent. She came into my life and gave me beautiful kids and God has used her to bless me.

How did you meet her?

We met while working on the Super Story set, that was 2003, so we have been together for 17 years. Though she has not been acting since and I hope she gets back into acting. My wife is a very domesticated lady. She is a family person. She loves the home. We are blessed with two kids. Our first child is just 14 years. She is almost out of secondary school, I don’t know how she will cope when she gets to a higher institution because they are so attached. She takes them to school in Ibadan, then go and pick them later in the day unless I’m around. Honestly, I don’t know how best to describe her.  I have never met anybody like my wife. She is just too industrious and good in home economics. I will amuse you, that my wife washes her car. She does lots of things. I don’t want to give her some weird names. She is just something else. She is the reason I can sit down today and say I’m a good family man, even when the challenges are there. I just pray, we will be able to realise all the things we have sketched out to make the family the way we want it, and I pray I have the energy and time to really make her happy.

I wanted to marry from the industry because of what I saw Olu Jacobs and Joke Silver were doing. Since I have tried outside my industry and it didn’t work, so I wanted someone who would understand everything, so we met on location, became friends, then my marriage crumbled. Then I was like let me be friend with her, but where would I get money to take care of a half cast? But somehow I realised she was just different in everything. Please thank her for me abeg.

READ ALSO: THE 5G & CORONAVIRUS CONSPIRACY THEORY – WHAT I.T. EXPERTS ARE SAYING ABOUT IT

THE PRESENT AND THE PAST FLU BY ERIC TENIOLA