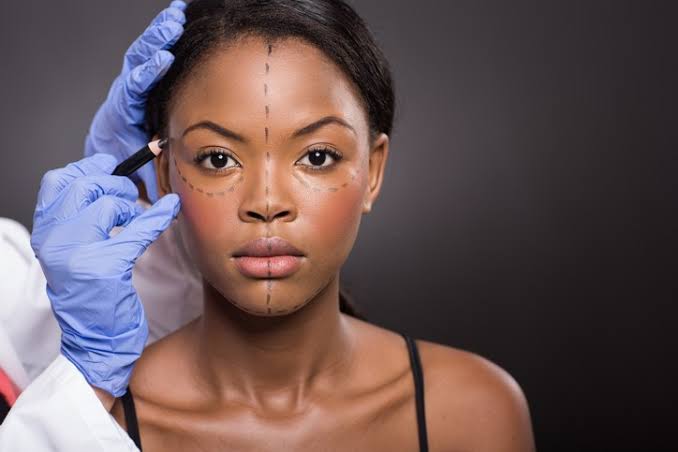 The craze for Figure 8 shape among rich  celebrity babes in Nigeria has led many to early grave. The crave for a better figure 8 shape which is regarded an ideal shape for women as covet and love their hour-glass shape. Unfortunately, not everyone is blessed with natural curves, but some women usually resort to plastic surgery to achieve the shape.

As some ladies enhance their hips, Others embark on pure Lipusuctions, a process of extracting fat is extracted and deposited at another area of the body.

Despite that there’s no problem with wanting to make a few enhancements, scarcity of qualified practitioners is taking toll on vulnerable and ill-informed patients  who ended up losing their lives in the process. Not only do some want the killer shapes badly, some also crave a perfect shape that will make any guy lose concentration anytime he sights them. Of course, there is nothing bad in looking ‘Shapy’, but the rate at which  celebrity babes lose their lives is what had been the subject of discussion.

Back in the days, the use of body shapers fondly called hips pads were the tools in the hands of celebrity babes, but the crave to have a Fleshy curvy shape made many of them embrace the cosmetic surgery. The  rate at which celebs crave for this Hour Glass figure is high and many are willing to come under the knife, some also have to cope with the ugly scar left on the body after the major Surgery. Having a huge scar on the body may not be an issue, but losing one’s life in the quest to look beautiful is what many can’t come to terms with as the death rate keeps increasing day by day. Many can’t help but ask why one has to pay a huge amount like 10 million naira and still lose one’s life.

Many of the rich celebs pay alot to get it done and still lose their lives.

A Lagos-based cosmetic surgeon is currently on the run after a patient died during surgery – The victim who was a former beauty queen, Onwuzuligbo Nneka Miriam, approached the doctor, Anu, for a BLL, liposuction and fat transfer, but unfortunately, she died owing to complications during the procedure.  Reports revealed that, Anu fled the clinic after the incident and is currently on the run. The indulgence in plastic surgery in Nigeria is gradually becoming a trend, especially in Lagos. While there are skilled doctors trained for the high-risk cosmetic surgeries, quack doctors have also infiltrated the practice, leaving casualties in their wake.

A Lagos-based cosmetic surgeon identified as Anu is currently on the run after she carried out a cosmetic surgery on a patient, resulting in her death. Anu who is the owner of @med_contour on Instagram, (personal Instagram handle @sisi_any) was approached by Onwuzuligbo Nneka Miriam; a former beauty queen, for a BLL, liposuction and fat transfer on December 31, 2018, and complications developed  from it. It was reported that Anu who used to hire or import foreign doctors to help her out with the surgeries, decided to personally perform the surgery on the victim as she wanted to try her hands at what she had been observing other doctors do. Unfortunately, things became complicated leading to the victim’s death. Sources revealed that the victim’s sister waited a long time for Anu to finish the surgery on her sister, but decided to go into the theater and find out what the delay was about. This was when she saw the almost lifeless body of her sister on the operation table with Anu by the side not knowing what more to do. Apparently, the victim had fallen into a coma owing to the complications during the surgery.

Just a few days ago, a popular Lagos big babe lost her life after going for this beauty surgery. She was said to have been planning to a cynosure turn at her 40th coming birthday.

Why is liposuction going wrong in Nigeria you may ask? What is the risk and hazard associated with it?

The most frequent major complications that can lead to death of a patient undergoing liposuction is pulmonary thromboembolism, which represents more than 23% of deaths.

Pulmonary of victims. Embolism (PE) is when a blood clot (thrombus) becomes lodged in an artery in the lung and blocks blood flow to the lung. Pulmonary embolism usually arises from a thrombus that originates in the deep venous system of the lower extremities; however, it rarely also originates in the pelvic, renal, upper extremity veins, or the right heart chambers   After travelling to the lung, large thrombi could lodge at the bifurcation of the main pulmonary artery or the lower branches and cause hemodynamic compromise.

Liposuction involves the surgical suctioning of fat deposits from specific parts of the body. The most common target areas are the abdomen, buttocks, hips, thighs, knees, chin, upper arms, back, and calves.

Liposuction breaks up and “sucks” fat out of the body through a hollow instrument (a cannula) inserted under the skin (subdermally). A strong vacuum is applied to the cannula.

In ultrasonic-assisted liposuction (UAL), the cannula is energized with ultrasonic energy, which causes the fat to melt away on contact. This method offers an advantage in treating scar tissue in areas such as the male breast, back, and in areas of prior liposuction. The disadvantages of UAL include the need for longer incisions on the skin, the potential for skin or internal burns, greater cost, and longer time.

The technique of tumescent liposuction has become specially popular, in part because of its purported safety. This procedure involves pumping several quarts/litres of a solution below the skin (subcutaneously) in the area to be suctioned. The solution consists of salt water (saline) to which is added the local anesthetic lidocaine to numb the surgical site and the vessel-constrictor epinephrine (adrenaline) to help minimize bleeding. The fat is then suctioned out through small tubes. Tumescent liposuction is now the most common.

The victims ages ranged from 33 to 54. Four of the 5 patients were usually women. All 5 had received lidocaine. Three died because their heart beat rates became too slow (bradycardia) and their blood pressure dropped dangerously (hypotension). It is well known that lidocaine lowers the heart rates. In fact, lidocaine is sometimes used as an emergency tool to slow down dangerously rapid heart beat  rates.

One patient died of a fluid overload. She had been given more than 13 quarts of fluid, 7 intravenously and 6 pumped into the surgical sites which included the breasts (for enlargement), chest, arms, back, abdomen, thighs, buttocks and knees. The excess fluid pooled in her lungs (pulmonary edema) and she was essentially drowned to death.

The fifth patient died of a blood clot in the lungs. During a tumescent liposuction procedure of the legs, the patient developed a clot (thrombosis) in her calf veins, which broke loose (embolized) and wedged in her lungs (pulmonary thromboembolism).

READ ALSO: HOW I HIT IT BIG IN THE U.S-CHICHI DIKE

How Many Celebrity Women Spend Close To N10m To Do Cosmetic Surgery & End Up Dying In The Process was last modified: November 29th, 2019 by City People

How I Hit It BIG In The U.S-CHICHI DIKE