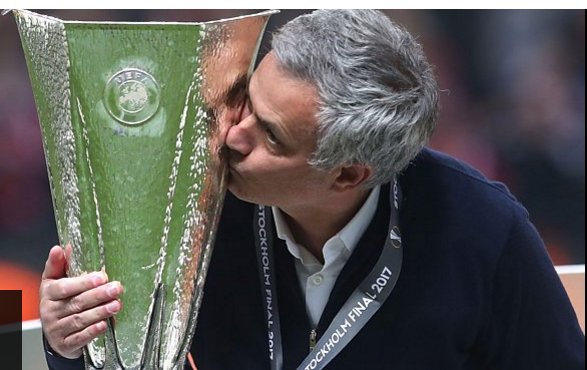 Jose Mourinho ended his first season in charge of Manchester United by winning the UEFA Europa League final at the Friends Arena in Stockholm and claiming his third trophy at the club.

“My thoughts are obviously with the victims of the tragedy in Manchester and with the families. The tragedy is in my mind. Maybe this victory will bring some happiness to Manchester, I don’t know. I would obviously, me and everyone else, we would change this trophy for the people that lost their lives, that’s obvious. But if I focus on the football side, I am really proud.”

“The team was fantastic from the first minute to the last minute. It was a fantastic collective performance, there were very good individual performances and we had total control of the game. We always thought that we could win the Europa League and we are very happy. We played intelligently, we did it in a comfortable way. We were much stronger than them. If you are dominant in the air you go long. There are lots of poets in football but poets don’t win many trophies. We knew where we were better than Ajax and we exploited their weaknesses.”

IN THE CHAMPIONS LEAGUE NEXT SEASON

“We are in the Champions League in the right way and for me the right way is winning the Premier League or winning the Europa League. We were not strong enough to win the Premier League but we were strong enough to win the Europa League and we are back in the Champions League. The club now has every trophy in world football. We fought hard for this since the beginning. We totally deserved the win. I am so happy to see all the players, including the boys with the crutches, with the trophy.
THREE TROPHIES OUT OF FIVE THIS SEASON

“And 64 matches out of 66 possible, which is incredible. I am very happy and I thank everyone that had a contribution for that, and I’m not speaking just about the players. Many other staff. The work they did to organise everything for us, for our families, to come to this important match with a short period of time, the way people dedicate themselves to that, to try to have our heads clean and focused and everything was perfect. So I thank everyone at the club that had a contribution for that.”
SEE ALSO: READ JOSE MOURINHO REACTION AFTER MANCHESTER ARENA TRAGEDY

“Wayne Rooney was ready to play, he was a big option. But I didn’t need to attack at 2-0. I told him yesterday that he could be the key man but he can perfectly be here next season. He is a very important player for us. If he stays next season I’d be very happy.”

“Ed Woodward has had my list, what I want, what I would like, for more than two months. So now it’s up to him and the owners. I wish Mr Woodward all the success in his work because now it’s time for me to disconnect, because I’m very tired. I am going to land in Manchester, I am going to get a car to London, then to Portugal. I don’t care about football for now. Now I am on holiday. I don’t want to see any international friendlies, I am selfish. I can’t do it. For me, enough is enough. It has been a very hard last few months, we were short of numbers. But with three trophies in one season and [qualifying for] the Champions League, I am very happy in my most difficult season as a manager.” Mourinho concluded.

Jose Mourinho Takes A Tour On His First Season At Manchester United – Read was last modified: May 25th, 2017 by Damilare Salami

[…] ALSO: JOSE MOURINHO TAKES A TOUR ON HIS FIRST SEASON AT MANCHESTER UNITED – READ “I can’t dress it up any other way. Other players are in really good form and deserve […]