Home Society How we killed Aisha Alli-Balogun; abducted her daughter, others — SUSPECTS
Society

How we killed Aisha Alli-Balogun; abducted her daughter, others — SUSPECTS 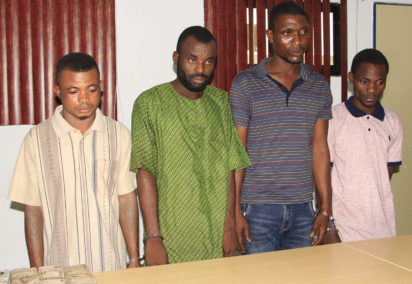 The police high command in Abuja yesterday, disclosed that it has apprehended two more suspects who took part in the kidnap of eight schoolgirls and staff of Nigeria Turkish International College, NTIC, Ogun State, last month, while the sum of N3 million was recovered from the latest suspects.

Vanguard gathered that the alleged abductors identified as Alex Super, also known as Yanga and Egbasimokumo Ayeomi, were arrested last Monday night at Majidun/Ajegunle Area of Ikorodu, Lagos state, few hours after they left their camp, inside the Ikorodu creeks.

According to reliable police source, the suspects also confessed to the December 2016 killing of Aisha Ali-Balogun, a presenter of a popular comedy show, Stand Up Nigeria.

On the occasion, Ali-Balogun’s two year-old daughter and six others were abducted by the gunmen who stormed the Ikorodu Road clad in military uniforms, shooting indiscriminately during the

Six other suspects, including a militant general Philip Joel, also known as General Kakadu and a nurse, Felicia Weinoh, who specialized in treating ailing victims and members of the kidnapping gang terrorizing Lagos and Ogun states, were earlier arrested by the operatives of the Police Intelligence Response Team, IRT, led by Assistant Commissioner of Police, ACP Abba Kyari.

Sources, who spoke with Vanguard, disclosed that Inspector General of Police, Idris Ibrahim, mandated the IRT operatives and policemen from Lagos and Ogun State Commands to mount surveillance at the entrances to the creeks to monitor movements of the kidnappers.

It was gathered that the effort paid off, when, Ayeomi and Super were spotted leaving the Ikorodu creeks from Majidun with some bags. When the bags were searched, the sum of N3 million was found in them and they confessed to taking part in the latest school kidnap during interrogations.

When Vanguard interviewed the suspects, they confessed, saying they collected N2 million each from the ransom paid for the release of the victims.

Super, also explained how his gang killed Alli-Balogun in 2016.

The 21-year-old Super told Vanguard that:

“I am a native of Arogbo Town in Ondo State but I came to Lagos and joined the kidnapping gang in 2016. One of my friends, Austin, invited me to the gang and we worked with Stone, who is a commander of the camp who worked under Ossy, our overall boss.

We also had 38 rifles in our Ajegunle area of Ikorodu den, but our first operation was on the Ajegunle- Majidun Road and we were seven who carried out the operation. We grouped ourselves in three, some were in front, others were in the middle, while the rest were behind.

Although, we all shot indiscriminately but the people at the front were the ones that killed people. My gang leader, American was the one who killed Alli-Balogun. He told us after the operation that when he stopped the woman’s car she was accompanied by a man and two children, but when he stopped them the man ran out of the car with the children while the woman sped off with the car and that he shot her because she almost killed him with the car. That it was after killing the woman that he abducted her daughter.”

“He explained that the woman almost killed him before he shot her. Stone, who was the leader of camp was not happy with the killing but he said he had no option. We kidnapped six persons, including the woman’s two year-old daughter and a ransom of N2million was paid before their release.

Someone who claimed to be the woman’s husband paid us N500,000, before we released the two–year-old girl.

The relations of the other victims paid us N1.5million and I got N45,000 as my share. That was because the people in the camp were many.

Three weeks ago, one of the leaders in our camp, Julius, brought the job of the kidnapping of the Turkish school girls and staff and when we kidnapped the girls, we didn’t maltreat them while we negotiated with their relations because one of the students and the white woman among them assured us that the money we demanded will be paid by the parents and the school authorities.

We used to beat our victims and make them cry on the phones while talking to their relatives but we didn’t beat the Turkish students.

I got N2million from the job and I was also monitoring the news, but I didn’t know that my colleagues had been arrested until I was nabbed.

The other suspect, Ayeomi, told Vanguard that he was the house keeper in the camp. He said;

“ I am a logger and I was invited to join this camp by my friends. They told me that they were expecting big money and my job was to cook for the kidnappers and their victims and also wash their cloths. When the money was paid I got N2million.’’

How we killed Aisha Alli-Balogun; abducted her daughter, others — SUSPECTS was last modified: February 1st, 2017 by Reporter