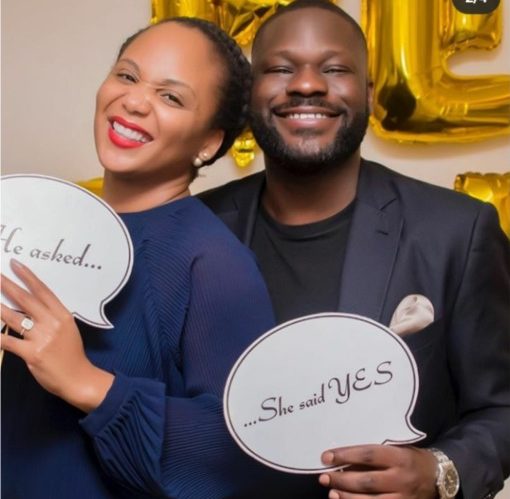 It was one of the big society and showbiz gists few weeks back when Lagos APC Chairman, Alhaji Tunde Balogun’s son, Kunle, married Nkechi Eze, the younger sister to Bella Naija Founder, Uche Pedro. It was a civil wedding which took many by surprise except for those who are very close to the couple. It was gathered that the engagement and classy reception is in the offing because of the situation of the country. It promised to be another wedding that will shut down the Lagos social scene due to the personalities involved especially the grooms father who is the Chairman of the ruling party APC in Lagos. He has friends across other states and also at the federal where their party takes center stage. Kunle is one of the sons of Alhaji Balogun who is a bit on the reserve side, the bride, Nkechi is quite popular because of her prominence on social media and being affiliated to the Bella Naija Brand. It was a classy civil wedding which was attended by both families and close friends of the couple. The love birds got married on Saturday 10th October 2020. The bride stunned in a lovely trouser bridal outfit by Wana Sambo Bridals. Her make up was handled by Bimpe Onakoya. Her hairstyling was by tobbiestouch while her bouquet was from araliabynature and the beautiful Ballon arch was by Nazadikids. She had four stylists for her look which comprises of her elder sister, Uche Pedro, of the Bella Naija brand who got married to the son of former Lagos deputy governor and APC stalwart, Femi Pedro. Also as part of her Stylist were Ijeoma Balogun, Tidy tribe, and Chimiky. The wedding Videography was by zero visuals.

For the bride, Nkechi who was the Bella Naija wedding editor and who grew her sisters brand, Bella Naija weddings to being the number 1 wedding website out of Africa with millions of followers, life has been good to her as she signed the dotted lines with her hubby of four years, Olakunle Balogun.

Nkechi has masters in Business Administration. She attended Wadham College and got a Scholarship afterwards, the Standard Bank Chairman scholarship at Brown University.

Her husband, Olakunle is another well-rooted quiet guy who also schooled abroad. He looked dapper for the wedding as his bespoke wedding suit was designed by award-winning designers, the Okunoren twins. He is the CEO of House of Assembles, hoa, an interiors designing company based in Lagos and Abuja. One of his brothers is Lekan Balogun who is currently the senior special assistant on economic and budget planning to Lagos Governor, Babajide Sanwoolu. Alhaji Tunde Balogun will be hosting the crème de la crème in few months if the information at our disposal is to go by as these celebrity kids will be celebrated in a big way.

The 69-year-old Lagos All Progressives Congress Chairman, Alhaji Babatunde Alade Balogun is a big shot in the society and well respected by many. He attended Tinubu Methodist School, Lagos Island, for his primary education and Ahmadiyya College, Agege, for his secondary school and Higher School Certificate education. He is a graduate of Ahmadu Bello University, Zaria, from where he obtained a Bachelor of Science (B.Sc Hons) in Social Science.

He worked with United Trading Company (UAC) from 1977 – 1981 before he left to establish his own business outfit, Bailey – Babs Nigeria Limited, which specialized in sales and service of computer software.His foray into partisan politics in the defunct Second Republic when he became a member of Unity Party of Nigeria (UPN) and Social Democratic Party (SDP) in the Third Republic.

At the advent of the Fourth republic in 1996, he was elected the Vice-Chairman of Apapa Local Government Council and in 1999, he was appointed first as Commissioner for Commerce and Industry and later that of Home Affairs and Culture in 2002, a position he held till 2011 at the expiration of first tenure of Mr Babatunde Raji Fashola.

The Battle For OYO State Babaloja General Gets Messier