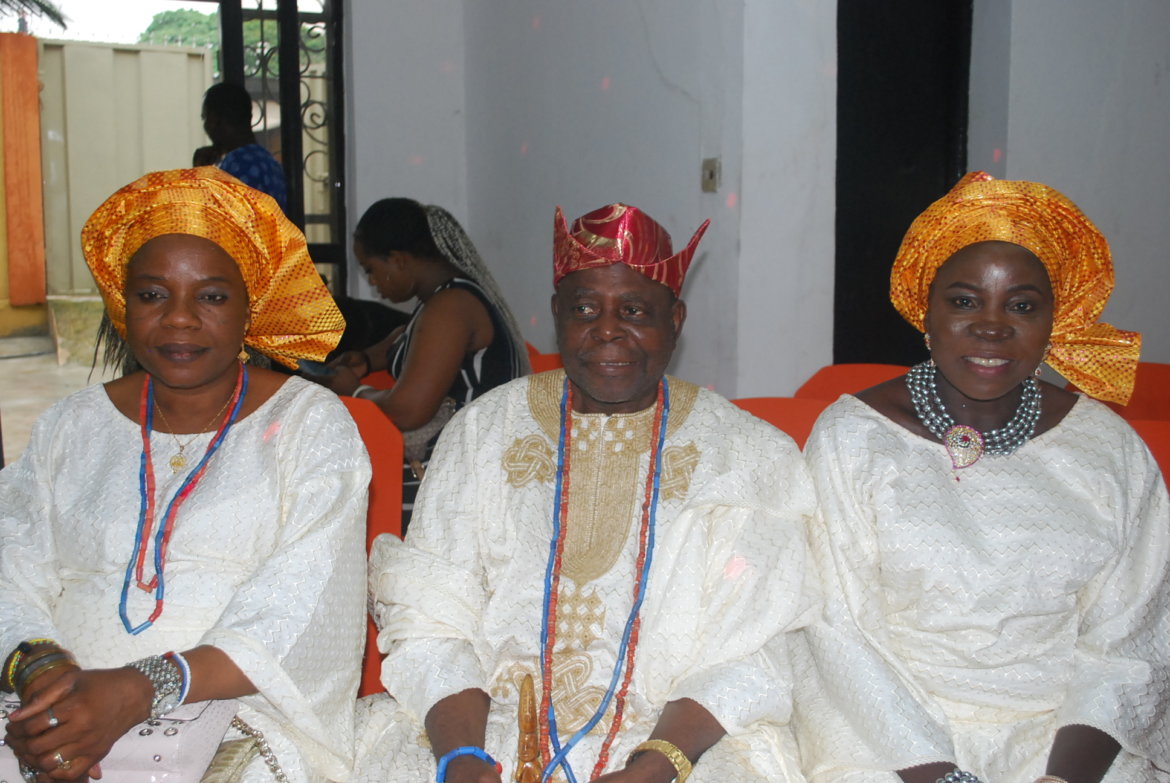 Nigeria foremost Ifa Priest, Ifayemi Elebuibon is one of the Nigeria foremost Babalawos and traditionalists. The Araba of Osogboland is not just popular in Nigeria, he is well known abroad. He even is a visiting professor at the Chicago State University in US.

Though, Baba Elebuibon, as he is fondly called, is very popular, but people hardly know or see his wives.

This respected Ifa priest, who clocked 70th a few weeks ago, was at City People Headquarters at Gbagada, where the Publisher, DR. SEYE KEHINDE, threw a 70th birthday in his honour. The event which was held at City People Event Centre played host to an array of celebrities. Baba Elebuibon came to the event with his two wives, Apetebi Ekundayo and Apetebi Ajibola. City People’s Assistant Society Editor, ABIOLA ORISILE, had an exclusive interview with them on what it takes to be the wife of Ifayemi Elebuibon.

You are Baba Ifayemi first wife, can we meet you?

I am the first wife of Elebuibon. We have been married for over 40 years and still counting.

How did you meet your husband, Baba Ifayemi Elebuibon?

It is a very long story, but I will try and make it short. I met my husband in Osogbo. I used to stay in the defunct Bendel State, but I later moved to Osogbo to learn fashion designing. After I got to Osogbo, I was taken to Ile-Olu-Ode, which is not far from Baba Elebuibon’s house. I am also from Ile-Olu-Ode. Olu-Ode is a very big compound in Oshogbo and my father is from there. My father stayed in Benin and even married a Princess from Benin but he wanted us to be in Oshogbo his home town. I met Baba when he heard the name his parents gave him. He was not popular then.

We met at “Ojude Aladun” which is not far from Olu-Ode compound, I was carrying wrapped pap (Eko) for my step-mum, which we were going to eat. Baba has a friend called Prince Oyegbade, whom, he was going to see, as we were both going, a young boy came to provoke me.

I just kept mute. Unknown to me, Baba was the one who sent him to test my patience. Though, I had many Suitors then, but I was not ready to say yes to any because I had no mother and I felt I should complete learning a trade before taking a shot at marriage. As I told you, I was learning in his compound and his brother wife whose name is Funke, was my boss.

Many of the suitors used to abuse me, so I used to take other routes where I knew I wouldn’t be attacked. Baba Elebuibon used to be close to Duro Ladipo and many of his other bosses such as Are Akoso, Obamoro, Oluweri to mention a few. I later said yes to his advances and the rest is history.

What kind of person is Baba Ifayemi Elebuibon?

Baba Ifayemi is a very nice person. He is not only nice to his wives, and children, you can ask around Osogbo, you would hardly see anybody saying negative words about Baba.

How happy are you to see Baba Ifayemi Elebuibon clocking 70?

I am more than happy to see him clocking 70th. I can remember vividly how my parents felt when he wanted to marry me. Many other people also said other things about him. Some felt I won’t use more than 15 days with him. At one point, I had to say I would accept anything that befall me in the course of our marriage, but today, I give God the glory.

What do you do to assist Baba, or are you also involve in Ifa divination?

No. I don’t. I know how to do Oriki. Oriki is different from “Ese-Ifa”.

Is there any of your children who also does Baba profession?

Yes, my first born and last born are into it. Though, one is late now. So I have two of my children and and also some of my younger mates’ kids, who are very good in Ifa divination.

What is the relationship between you and your younger mate?

It is very cordial. Even before I had a younger mate,  I knew I needed an assistant. I always knew my husband would have another wife. This is because Babalawos hardly have one wife and this is because one person can not handle all the work. I appreciate my younger mate a lot. She is a virtous woman. She always does what is expected of her. Even when I am not around, she doesn’t segregate, she would do the needful and I am always appreciative of this. Sometimes, she would have done something even before I tell her to. She would always ask if it done well. I always tell people that she is someone I can count on.

Baba never jokes with his exercise in the morning. He will later take fruit and pap.

What does it take to be the wife of a foremost Nigeria Babalawo such as Baba Elebuibo?

The “Apete-Ibi” who is a wife of Ifa priest, would go and sweep the Ifa house. After this, she will go and fetch “Igbole” which is leaf, that would be squeezed an mixed with bull shit (igbe Malu popularly called “Boto”). It will be left for 5 days to soften it. We will use it to “Pale”. He is “Omo-Onile”, so we had to do what is called “pale”.

There are some times, you must be seated when they are discussing. It may be that your husband want to discuss somethings with his colleague, you must excuse him. Another thing is taboo, you must endevour to know all their Awo.