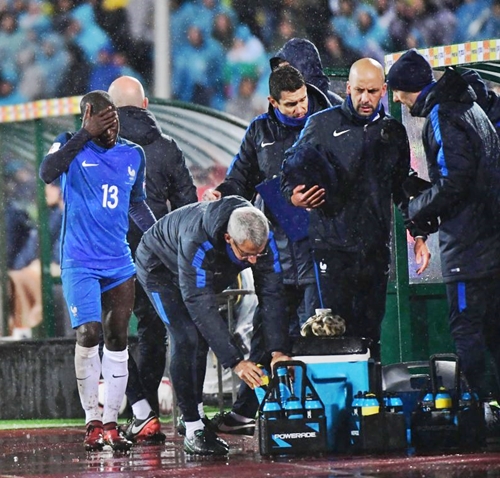 N’Golo Kante has dealt Chelsea a fresh injury blow as he looks set to miss the rest of this month with a hamstring injury, The Sun UK reports.
The influential midfielder is back at the club’s training ground undergoing treatment for the problem which forced him out of international duty at the weekend.
It is feared Kante could be out for two to three weeks – which would rule him out of Chelsea’s important Champions League double-header against Italians Roma.
Player of the Year Kante joins Chelsea’s record signing and leading goalscorer Alvaro Morata on the treatment table in a punishing spell for the Premier League champions. Morata was sent home from Spain duty without kicking a ball last week after suffering a grade two hamstring strain playing against Manchester City on September 30.
He will miss this weekend’s trip to struggling Crystal Palace who are fighting for their lives at the bottom of the Premier League.
Kante has suffered a similar knock while playing for France against Bulgaria on Saturday and initial treatment reveals it could take some time to nurse him back to fitness.
The double injury blow will rob Chelsea boss, Antonio Conte of two of his most important players, just when he needs to get his title defence back on track after losing 1-0 at home to rivals City two weeks ago.
Massive Blow for Chelsea as Star Player, Ngolo Kante will Miss Several Weeks Over Injury was last modified: October 13th, 2017 by Arinze Ago