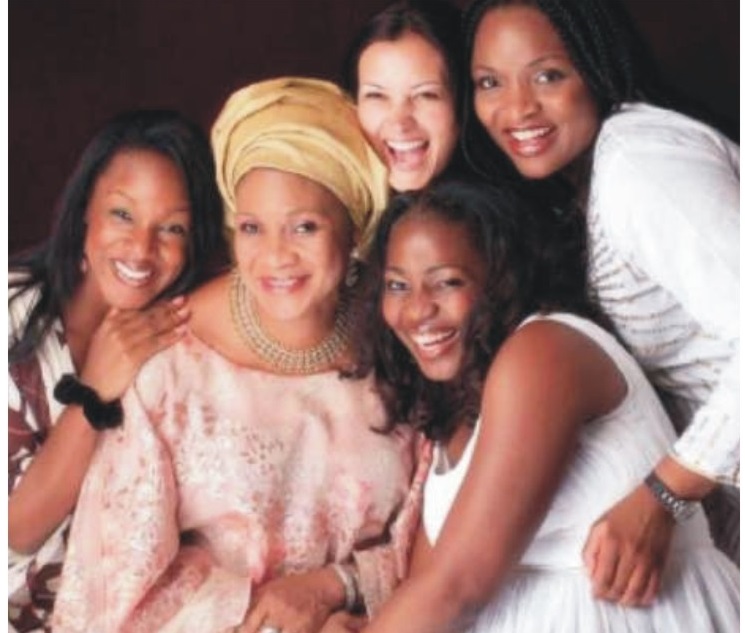 Otunba Subomi Balogun has 4 sons. They are Bolaji, Jide, Ladi and Gboyega. Every one of these guys is doing pretty well for himself. Educationally, they are all very solid.

And their father is one of the Doyens of Banking industry. Their father was the founder of the First City Monument Bank, FCMB, which began its operations in 1982. They are privileged to have been born into the Balogun family. Behind this dashing men are beautiful damsels namely Kemi, Uche, Banke and Emma. They are thorough bred and well read ladies. They attended Ivy League schools both at home and abroad and are equally doing well in their respective endeavours.

The story of these gentlemen will never be complete without mentioning their father’s influence in their lives and choice of careers. They have gained a lot of experience from him and carefully toed his business path of life especially in the financial and banking sector. This has been evident in the life of all his sons. Apart from running and being on the board as directors of many of their father’s companies, this set of intellectuals also have their personal businesses and companies that they run. Alot have been said about them, but their wives have always been away from the prying eyes of the media.

They have all made a success of their careers and their marriages. The first son, Mobolaji who is a tested and accomplished investment banker and financial guru, is the CEO of financial advisory services firm, Chapel Hill Denham. He is married to Kemi, the beautiful daughter of a veteran journalist, poet, playwright and author, Frank Aig-Imoukhuede. They have been married for many years and their love is still waxing stronger.

Bolaji serves as the Chief Executive Officer of Chapel Hill Denham Group and Managing Partner and Chief Executive Officer of Chapel Hill Advisory Partners Limited. He has over 19 years experience in investment banking and has spent 11 years in the investment banking within the First City Group. He served as Executive Director and Chief Operating Officer at CSL Stockbrokers (part of First City Group) and was Executive Director at FCMB Capital Markets. He left FCMB Capital Market to become a co-founder of Econet Wireless Nigeria.

He was also a founding Director and a member of the licence bid auction team, which won the GSM licence. Balogun has been Chairman of Lafarge Africa Plc since May 23, 2015. He served as a Non-Executive Director of Nigerian Aviation Handling Company Plc. He is a licensed securities dealer in Nigeria and attended London School of Economics, University of London where he obtained a B.Sc. Degree (Hons) in Economics in 1989. Bolaji and Kemi stepped out together at Bolaji mother’s burial last October and they are very much in love. They have amazing children, Sayo, Dayo, Timi, Kanyinsola and Funmilade.

Jide Balogun is the second born of the business mogul and he is married to Uche, the beautiful daughter of Ide- Asaba billionaire, Chief Sonny Odoqwu. The relationship has further strengthened the bond of friendship between Otunba Subomi Balogun and Chief Sonny Odogwu. Uche Balogun who in her heydays used to be in the limelight and was more visible on the social scene, took a back seat just like her sister, Delores Odogwu,they are both popular among the Odogwu sisters, but Uche seems to be making her way back to the centre of jollity. She has been seen rocking the social scene in recent times and some time in the company of her darling husband.

Determined to make his father proud and extend the family’s business empire, Jide has taken charge of the real estate arm of the family business called PRIMROSE Development Company. Prior to co-founding PDC, Jide was Managing Partner of Balogun & Balogun law firm and in addition to his legal background, he has worked in one of the leading investment banks in the country. He is a member of the Nigerian Bar Association and holds an MBA from Durham University, UK.

What of Ladi Balogun and his pretty wife, Banke?

They are also one of the powerful couples in the corporate sector. Ladi is the 3rd son of Otunba Subomi Balogun and married into an illustrious Lagos family, Alakija family. The tall, handsome, gorgeous, and good-looking former MD of FCMB, who is now the GMD of FCMB Group, met his pretty wife in the United Kingdom (UK) through his best friend, who is Banke’s cousin. She works with Shell.

He has over 14 years experience in commercial and investment banking in Europe, United States of America (USA) and Africa and began his banking career in 1993 at Morgan Grenfell and Co. Limited, one of the UK’s most prestigious investment banks, which was later consolidated into the investment banking division of Deutsche Bank. He worked at Citibank in New York and has worked in various areas of the FCMB, including Treasury, Corporate Banking and Investment Banking. He is also a director of the following companies: City Securities Limited; CSL Stockbrokers Limited, First City Asset Management Limited and Inters witch Nigeria Limited (Nigeria’s first national payment switch).

Mr. Balogun holds a Bachelors degree in Economics from the University of East Anglia, UK (1993) and an MBA from Harvard Business School (2000) USA. Their beautiful marriage of 15 years has produced 4 lovely children, Folake, Ladimeji, Damilola and Damola. The last born of the family, Gboyega Balogun is married to a big-time brainy Emma. For 10 years now,Gboyega has been the Managing Director of CSL Stockbrokers Ltd, one of the subsidiaries of FCMB Group. Emma is the Global Mobility Advisor at Electronic Arts (EA) Royal Holloway, University of London Guildford.

She was also at a time human capital manager and worked as a corporate planner for Brass LNG Ltd, (Credit Suisse), London and New York, she graduated from the prestigious Royal Holloway University of London and her College was at Millfield School. She is also a senior partner at the youth offering team of the Royal Borough of Kensington and Chelsea(RBKC).

Gboyega holds a B.Sc. in Economics and Management from the University of London (Royal Holloway College), and M.Sc. in Property Investment from City University, London. He was a registered representative of the New York Stock Exchange (Series 7), the London Stock Exchange, through his accreditation with Futures and Securities Association Registration (SFA) and is now an authorised dealer on The Nigerian Stock Exchange.

UI Medical Students Now Have No Hostels, See Where They Are Sleeping [Photos]