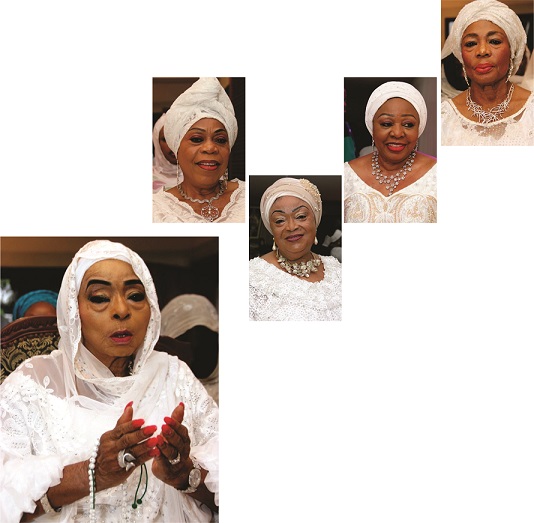 If there is anything that Sisi Abah Folawiyo is known for, it is keeping her old friends. She treasures them like diamonds. Her love for them never wanes. She loves them to the bone and they reciprocate too with so much love. It may amaze you that she still has some of her friends who have been with her for over 4 decades and still counting. Some have been her friend right from when she was still single and they have also been able to keep their relationship going even after finding their husbands.

Have you ever gone to any High Octane party in Lagos without seeing Sisi Abah with her clique of friends? The answer is NO. One of her friends who’s part of this clique is Mrs Yewande Onilere who has been Sisi Abbah’s friend for over 50 years.

Many call her Sisi Abbah’s “Besto“ because if you don’t see Yewande Onilere in her house, be rest assured that she will be at her best friend, Sisi Abbah’s house. How did they become close? Speaking with Yewande Onilere on how they became close, she explained that they have been close for about 50 years. Her words “I became friends with Abbah Folawiyo when we were both in our 20s. We have been good friends.

Though sometimes, we have our ups and downs, but we have been good friends but we never talked about our differences with anybody, we settle our problem within ourselves. It may also interest you to know that we were born the same month but I am going to be 75 years next year. Our paths crossed in downtown Lagos and that is Isale Eko to be precise. We met at a party and we just took to each other.

We were both married then“, she revealed.  Another close friend of Sisi Abah Folawiyo is Ireti Asemota, the wife Chief Sunny Asemota, the auto-Mobile dealer. Mrs Ireti Asemota has been Sisi Abbah’s friend for over 50 years too. How did they become close, you may want to know? Well, they became close through a small fight on Lagos road. Accroding to Mrs Ireti Asemota, “My friendship with Abbah started when I was in my 20s.

We are age mates as I will be clocking 75 too this month. On how our friendship started, it’s a long story but I will try and cut it short. I and Abbah met on Lagos road. I was driving with my husband and I used to drive so fast. Abbah was at my front and I decided to overtake her thinking she was not driving too fast. She packed and said, ‘why are you driving like this and I said, why are you driving too slow?’

My husband begged her and we ended up being friends that same day, she explained.  Another friend of Sisi Abbah for over 40 years is Florence Ita Giwa. They have been inseparable for over 50 years. Sisi Abbah and Ita Giwa like each other, no doubt. Hajia Bola Shagaya and Abbah Folawiyo are also very close. Though Hajia Bola Shagaya may be in her 60s but still, they are very close despite the age difference.

Though she is based in Abuja but she is always seen around Sisi Abbah whenever she is in Lagos. Those who know revealed that having an Ilorin root made them very close for several decades. Tinuke Abioro has also been close to Sisi Abah Folawiyo for close to 40 years. According to her, ‘my friendship with Sisi Abbah Folawiyo started from the church, Celestial Church of Christ. This was before she married Baba Addini of Lagos. She used to make dresses for me then. Then she married Baba Adinni and converted to Islam and same with me when I married my husband, Chief Bolarinwa Abioro. We embraced together Islam and the rest is history‘, She said.

Why We Have Remained Friends With Sisi ABAH, 5 Best Friends Talk About Their Over 50 Yr Friendship

I Am A Happy-Go-Lucky Girl – HONEYPOT, TVC Entertainment Splash Presenter

Bride-to-be arrested with another boyfriend during cult...