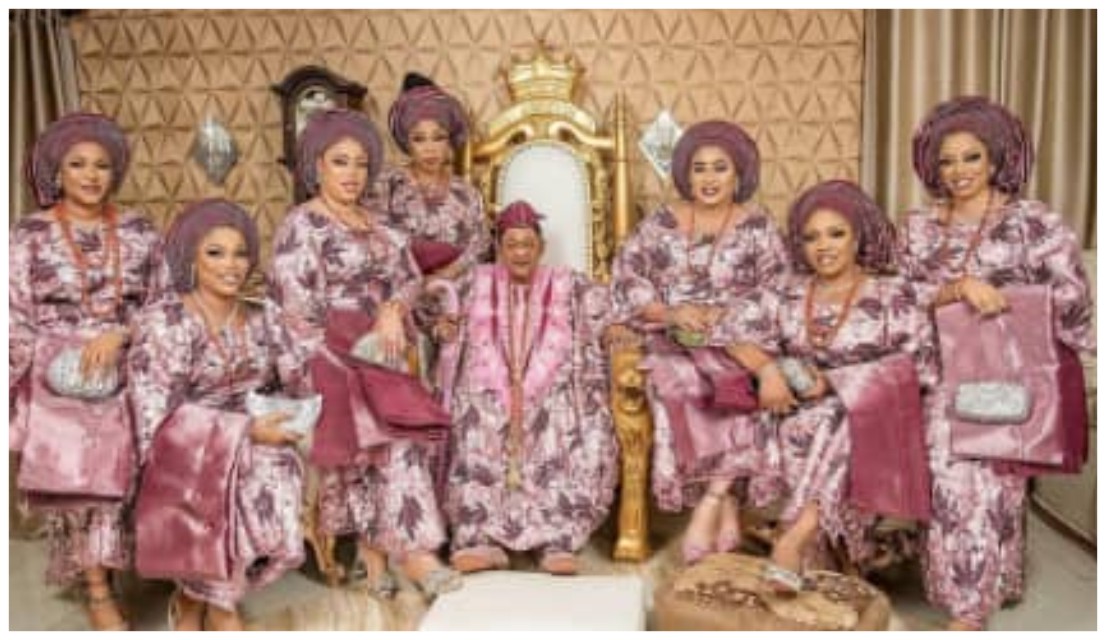 This is the story of the beautiful Olori’s behind some of our top Yoruba Obas. It is the story of these women imbued with  Beauty, Style & Royalty. These are the women who complement some of our Yoruba fathers across Yorubaland, like His Royal Majesty, Oba Saheed Ademola Elegushi of Ikate Kingdom (Kusala III).

His wife is a stunning beauty. She is called Queen Sekinat Aramide Elegushi. She is a Queen of Style & Beauty. Whenever she steps out to a function or party, all heads usually turn in her direction. She has good carriage and presence. And she oozes confidence too. They have come a long way from their school days. She is now Olori Agba because Oba Elegushi has a 2nd wife, who is from the North. She is Queen Hadizat Adeshola Elegushi. She is also beautiful and she has settled in as Kabiyeesi’s Olori Kekere. Kabiyeesi celebrates both of them on his IG page, from time to time.

That the Ooni of Ife’s wife is beautiful is no longer news. Ooni Adeyeye Enitan Ogunwusi is married to a stunning beauty called, Queen Silekunola Moronke Naomi Ogunwusi, who is a lady of style. The moment she became Ooni’s Olori she stepped up her style. She is naturally beautiful. She is a Prophetess/Founder of EN Heralds Ministry.

How about Hiw Royal Majesty, Oba Abdulwasiu Gbolahan Lawal, the Oniru of Iruland?

His wife is equally dashing. Olori Mariam Lawal is beautiful. She wears the very best, just like her husband who loves to look good all the time.

Let’s also tell you about Olori Bolanle, the Olori of HRM Oba Olufolarin Ogunsanwo, the Alara of Ilara Kingdom. Olori Bolanle Ogunsanwo is beautiful and stylish. That is to be expected. She is a fabric merchant. She is the CEO of Fabriqueplus. She wears the best and complements her equally handsome husband.

Queen Oluwaseyi Asake Adako is another beautiful Olori. She is the wife of His Royal Majesty, Oba Omotunde Alaba Ebiyanmi Adako, the Oliyere of Iyere. She always looks Glamorous.

She once told City People how much she loves Fashion. She runs a fashion business, which is about 5 years now. She sells fabrics and she makes them as well, bespoke.

Let’s tell you about the Olori’s of the Alaafin of Oyo, Oba Lamidi Adeyemi. He is married to a bevvy of beautiful Oloris. They are about 10 pretty queens of the Oyo Empire. During Ileya, the Alaafin stepped out with them. One of them is HRM, Queen Folashade Aishat Adeyemi (Iya Triplets). There is also Olori Adeyemi Mujidat, and HRM Olori Mojisola.

What about Queen Mosunmola Adeniyi, the Olori Onisabe of Igbobi Sabe.

She is also a stunning beauty. Both the Olori and Kabiyeesi have come a long way, from their days in the U.S.

Equally stunning is Olori Ayeesha Omowunmi-Lawal (Queeneesha), the adorable Olori, Timi of Ede. She is a successful entrepreneur. She is the CEO of @stylebyeesha.

She is one of the most beautiful and fashionable Olori’s in Yorubaland. She is classy yet simple.

Let’s tell you about Olori Adebusola Osoja, the Olori of the Onikogbo of Ikogbo Kingdom in Ogun State. HRM Oba Engr. Nurudeen Oluwadare Osoja. He is an Oba with Class and Style. He is married to a lady of great style. She is naturally beautiful. She’s the CEO of The Royal Shimmer Enterprises which has Shimmer Royal Place as its subsidiary. At Shimmer Royal Place, Olori Osoja runs clothing, make-up, cakes and confectionaries, drinks and wines, smoothies and cocktails outfits. She also trains people in event management. She has made many fast-rising event managers through this platform.

There is also the beautiful wife of HRM Oba Adedokun Abolarin, the Oragun of Oke Ila, in Osun State.