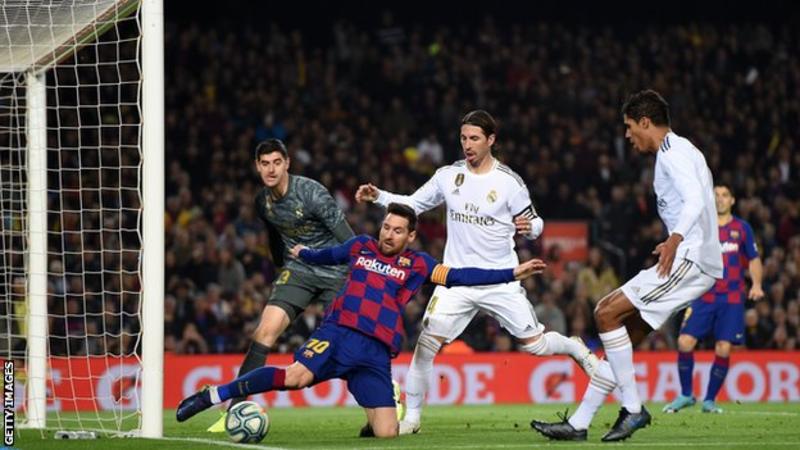 Barcelona and Real Madrid played out a goalless and largely uneventful El Clasico at the Nou Camp.

Gareth Bale’s disallowed goal was the closest either side came to scoring, but Real left-back Ferland Mendy was judged to be offside in the build-up.

Both clubs are now five points clear of Sevilla who lost to Villarreal on Sunday.

The 179th La Liga meeting between these sides was originally scheduled for 26 October but was postponed because of fears of civil unrest in Catalonia.

Both teams shared the same hotel in the lead-up to Wednesday’s game and travelled to the ground together, two hours before kick-off amid security concerns.

But while several thousand Catalan independence protesters gathered outside the stadium, there was little suggestion that their presence was going to place the fixture in doubt.

There was however an interruption to the game early in the second half, with yellow balls raining down on the field to briefly delay proceedings.

A spectacular mosaic featuring the blue and garnet colours of Barcelona and red and yellow of Catalonia greeted the players as they walked out at the Nou Camp.

But though the nature of this contest attracts a worldwide audience in the hundreds of millions, this was not the spectacle that many have become accustomed to over the years.

Barca’s Lionel Messi had scored 14 goals in a dozen matches prior to this, and Real’s Karim Benzema arrived at the Nou Camp having scored nine goals in his last eight games.

But both struggled to sparkle as the fixture ended goalless for the first time since November 2002.

Messi uncharacteristically scuffed at the ball when presented with a good chance by Antoine Griezmann, while Benzema’s best effort was a first-half snap-shot on his weaker left foot from 20 yards.

Barcelona’s first-half performance mirrored their showings in defeats at Athletic Bilbao, Granada and Levante and that allowed Real to impose themselves on the game.

At the other end Messi saw Real captain Sergio Ramos – who now has honour of making the most appearances in this fixture (43, one ahead of Messi) – clear his prodded effort at goal, in a game of few clear-cut opportunities.