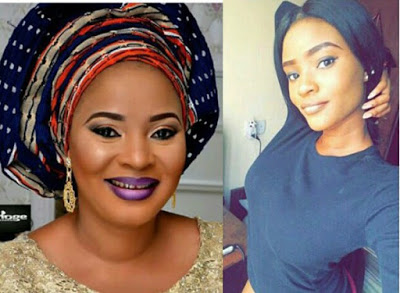 The burial arrangement of recently deceased Yoruba actress, Moji Olaia is causing an unexpected rift within the family.
The late actress was a practicing Muslim who converted from Christianity as an adult, and certain member
However, her 20-year-old daughter, Adun is having none of that and insists that her mother’s corpse be brought back for burial in Nigeria.
Although family members ushered her into a secluded room to calm her down, the grieving young lady kept repeating that she wants to see her mother.
‘She must be brought back,’ Adun said. ‘I don’t care what anybody says, I just want my mother’s body’.

It could however be difficult to bury her the same day as internment are costly in developed countries.
In Canada where she died, funeral costs can rise as high as $15,000. Flying her body back on the other hand could cost around half that figure.
There is no concrete plan for her burial at this minute.
Her family are suggesting that she be interred today according to Muslim rites.

Moji Olaiya’s Daughter To Family: Don’t Bury My Mother In Canada, Bring Her Corpse Home was last modified: May 18th, 2017 by Daniji Emmanuel

[…] Also:Moji Olaiya’s Daughter To Family: Don’t Bury My Mother In Canada, Bring Her Corpse Home She was reportedly rushed to a hospital in Canada after a brief seizure. Here is the photo of her […]