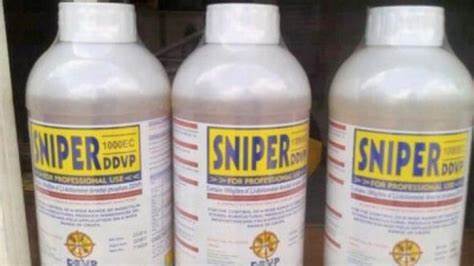 The National Agency for Food and Drug Administration and Control (NAFDAC) has banned the sale of Sniper and Dichlorvos (organophosphate used as an insecticide) products in open shops and supermarkets.

The Director-General of NAFDAC, Moji Adeyeye, announced this in a statement on Wednesday.

A number of Nigerians had called for the ban of the product following its rampant use in cases of suicide.

Adeyeye said the ban takes effect from September 1, adding that such products should only be used for outdoor purposes and not domestic use.

The agency gave brand owners and distributors until August 31 to recall the products from open shops. It also issued a six-month ultimatum for the manufactures to exhaust the products they have in various accredited agro-input dealers outlet.

“NAFDAC is giving a two-month (up to August 31, 2019) notice to brand owners/distributors to recall and withdraw their products from open markets and supermarkets that do not have garden corner/shelves to the agro-dealer outlets,” the statement read.

“The sale of Sniper insecticide and other Dichlorvos brands in open markets and supermarkets nationwide is prohibited with effect from September 1, 2019. NAFDAC is giving a six-month moratorium up to January 1, 2020, for brand owners to exhaust the products that are in various accredited agro-input dealers (distributors/marketers/retailers) outlets.”

The agency ordered the mandatory listing of dealers, distributors, marketers and retailers of agrochemicals.

NAFDAC had earlier banned the production of smaller packs of Sniper over its affordability and ease of access for suicide victims.

The senate, on Tuesday, called on the federal government to ban the production, importation and circulation of Sniper insecticide across the country.