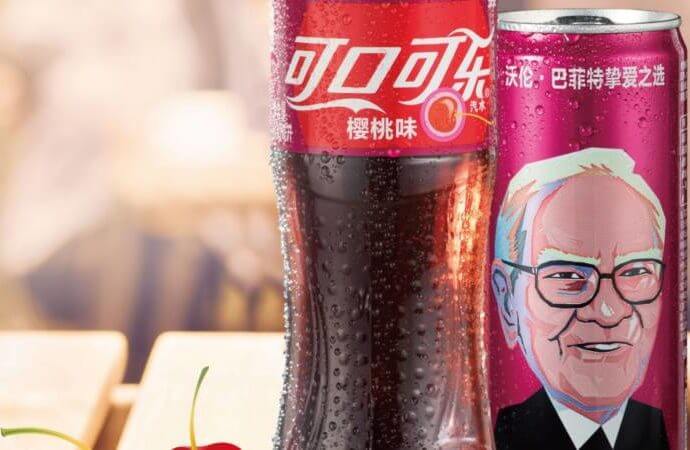 The likeness of billionaire Warren Buffett is gracing Cherry Coke cans in China, where the company’s largest investor enjoys a legendary reputation.

Coca-Cola announced over the weekend that a grinning cartoon portrait of the American business magnate would adorn cans and bottles of his favourite flavour after it was introduced in the country on March 10.

“Incidentally, there is no compensation involved,” Buffett told Yahoo Finance of the use of his image for “a limited promotional period.”

The 86-year-old investor and philanthropist has been photographed on numerous occasions taking a swig of Cherry Coke, earning him the title of “best-known fan” from Coca-Cola chief executive Muhtar Kent.

In Communist-ruled China, where Chairman Mao portraits are as ubiquitous as brand-name logos, Buffett’s business acumen has made him a celebrity and inspired thousands of Chinese investors to reportedly flock to Omaha, Nebraska, for Berkshire Hathaway’s annual meeting last year.

While the meeting was livestreamed around the world, simultaneous translation was only offered in Mandarin.

As for his enduring appreciation of Cherry Coke — he invested in Coca-Cola as early as 1985 — Buffett admitted in his shareholders’ letter last February that he consumes enough Coke and candy “to satisfy the weekly caloric needs of an NFL lineman.”

“There’s nothing like eating carrots and broccoli when you’re really hungry,” he added, “and want to stay that way.”

The New Face Of Coca Cola In China Is Billionaire Warren Buffet was last modified: April 5th, 2017 by Arinze Ago