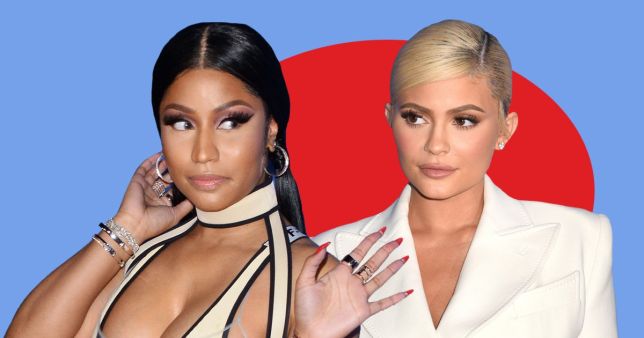 Nicki Minaj may have thrown some mega shade at Travis Scott before the MTV VMAs, but she insists she still loves his girlfriend Kylie Jenner. After a video obtained by Mail Online showed Kylie doing everything she could to avoid the Super Bass songstress on the ceremony’s red carpet, fans have wondered whether the rumoured feud between the pair is still ongoing. However, according to the rapper, there is no drama between them, and she is adamant they are still on good grounds. Addressing the video on her Queen radio show, the 35-year-old spoke about her relationship with the beauty mogul. Kylie Jenner does a u-turn after spotting Nicki Minaj

She said: ‘I fucking love Kylie and that’s not going to change. This is not real life, this is entertainment. I love Kylie and so do my fans. ‘Kim was on my first episode of queen radio — fucking love her.’ She added: ‘We’re not going to make something that it’s not. We’re not going to start any dumbass cat fights for your entertainment. ‘This is strictly music, between musicians…She supported her man like she should. Me and my fans are not feeding into this.’ Before the event Nicki had called out Travis, and claimed he’d used his gal and their baby daughter Stormi to gain interest in his new album Astroworld. Nicki called out Travis when he beat her to a debut at number one .

Scott had pipped her to the post when he beat her to a debut at number one in the official album charts – and she was not happy. In a string of tweets she wrote: ‘I put my blood sweat & tears in writing a dope album only for Travis Scott to have Kylie Jenner post a tour pass telling ppl to come see her & [their baby] Stormi. lol. I’m actually laughing. #Queen broke the record of being number 1 in 86 countries. Thank Jesus & thank you to my fans.’ Nicki since continued the rant on her radio show about him unfairly boosting his album sales with merchandise bundles. She said: ‘What I’m not going to have, is this autotune man, coming up here selling fucking sweaters and telling y’all he sold half a million albums because he didn’t.