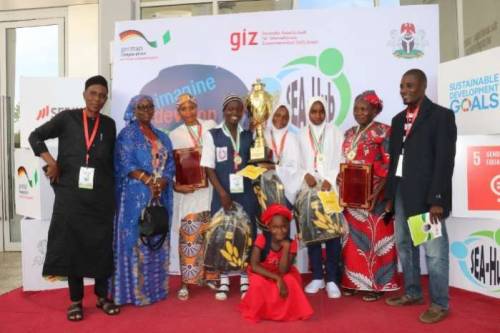 The competition which was organised by Deuche Gesellschaft fur Internationale Zusammenarbeit (GIZ) on Thursday in Abuja was titled “Securing the Future of Young Nigerians.

Earlier, Minister of State for Education, Mr Chukwuemeka Nwajiuba said that it was a privilege to be a part of the laudable initiative and commended GIZ for organising it.

He said that in recent years, gross mismanagement of government institutions and resources plus the frustration of young Nigerians in the various institutions of higher learning had been a challenge for young people.

The minister said that the stress on young people and their families, due to economic global meltdown was also a challenge for young Nigerians.

Nwajiuba said in order to make life worth living, crucial solutions were being provided by GIZ.

He said that the entrepreneurial skill acquisition which is being carried out in four states of the country is empowering young Nigerians.

According to the minister, it is helping them to achieve their full potentials, creating an enabling environment for parents to give full support to their children and all-round development, thereby giving them independent life.

Nwajiuba said that the ministry will continue to partner with Sea-Hub to ensure that Nigerian secondary schools develop entrepreneurial skills for self-reliance and independent life for the improvement of Nigeria’s economy.

Earlier, the Head of Programmes, Mr Detlev Holloh said GIZ has been committed to sustainable development in Nigeria since 1974.

He said that the organisation has continued to enhance employment and income generation with several programmes and designs like the Pro-Poor Growth and Promotion of employment in Nigeria.

Holloh explained that the programme promotes entrepreneurship through several approaches as the SEA-Hub.

He said that it had a direct impact on some of the sustainable development goals and it is in line with Agenda 2030 and Goal 3 of the strategic plan of the Federal Ministry of Education.

He said that SEA-Hub is an extracurricular club created in schools to help young people build life-long skills and prepare them for the future.

“So far, SEA-Hub intervention has reached close to 15,00 students in Edo, Niger, Ogun, and Plateau with support from Federal Ministries of Youths and Sports and Education.

“It is our hope that this event and strengthened partnership, with all our invaluable partners, we can continue to work together at state and national levels to build an inclusive and sustainable future for our entrepreneurs,” he said.