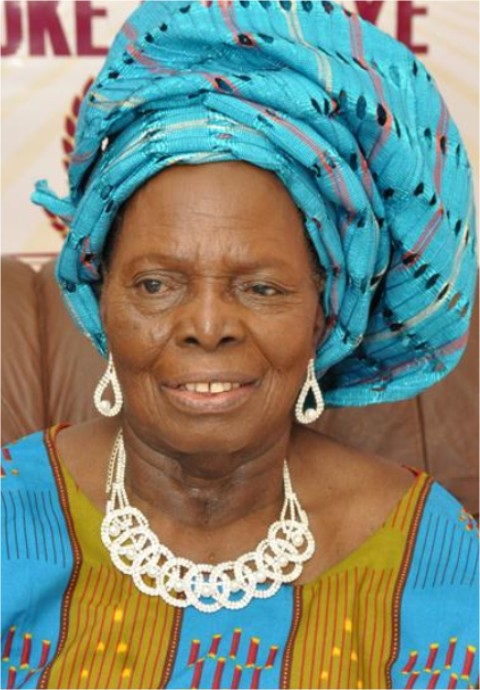 Yeye Oba Florence Kikelomo Aduke Adekeye  died a few days back. She is the mother of Oba Adeyemi  Adekeye, the Abepa of Joga Orile, in Ogun State.

In June 2016, she turned 80. Just before the birthday, Mama spoke to City People Publisher, SEYE KEHINDE about her life. That was the 1st time, Mama would tell any media her story. Until she passed on, she lived inside the palace at Joga Orile.

Her son built her a house at the back of his sprawling Palace.  Below are excerpts of her unpublished interview then. She died at 83.  Her 80th birthday was memorable. The  event kicked off with the Thanksgiving service at St. Peter Anglican Church, Joga Orile Yewa, while the reception was held at Olumilade Country Home, Lagori Estate, Joga Orile. The event was attended by dignitaries from in and outside Ogun State amongst are late Senator Isiaka Adeleke, Speaker Ogun House of Assembly Honourable Suraj Adekunle Adekumbi, Oba Kehinde Olugbenle, to a mention a few. Below are excerpts of the interview.

Mama you will be clocking 80 in a few days time, how do you feel?

I am happy. I thank God for taking care of me since when I was young uptill now that I am 80. All I want to do is to thank God. I thank him all the time.

How did you plan to celebrate it?

I want to go to the church to celebrate, to do thanksgiving.

I was born in Ilaro. I schooled there. I went to Idogo (which is my mum’s mother’s side). I studied there also. I now left the place, I went to Kwara, (Ilorin Province) to complete my education. We wouldn’t get into Standard 6 here. There was no Standard 6.

They only had it up to Standard 4. That is why I went to Kwara at Oke Ago near Omu Aran. The school I went to was set up by Missionaries.

That is where I passed Standard 6 and I came back. I wanted to do Teacher Training there. They said we should go back to Western Region, that they have so many people wanting to enter school. We came back home. We went to apply for teaching line, then at our Egbado  Divisional Council. That was where they signed me on as a Teacher.

So they took us into Teaching line. I was posted to Ebutte Igboro at Yewa North. That was where I was teaching then. We went for 6 weeks training at Oke-Ila, to train as a Teacher, at the Teacher Training school there. After that, we came back. But I didn’t like the job of a Teacher. I did it for 3 years. I worked at Araromi-Ibeju, Ebute Igboro. Then I left because of my child who used to fall ill. He wouldn’t let me leave him. He will want me to be carrying him. I went to report to my superior, that I wanted to take him to the hospital. The inspector then said I can’t, that I was the one they employed not my kid.

He said I can’t be going to the hospital everyday. My adopted mummy, who trained me, was the Iyalode of Idogo said we are all working because of our kids. She said I should leave the job. She didn’t want me to even go for teacher training. All she wanted me to do was to do business. My real mother is educated.

She was the one that insisted I go to school. My husband wasn’t at home at that time. He was in Oyo. So, I left. Then Iyalode took me to UAC, Leventis and co. in Lagos and I started selling fabrics. That was what I was doing until they divided Egbado Divisional Council into 2. That was how we were zoned to Egbado North then, which has now become Yewa North now.

When I got there, then, they didn’t have midwives. They were now looking for those who can do midwifery.

How did you feel when your son Oba Adeyemi Adekeye was picked to be King?

I never thought any of my sons, will be an Oba before the elders in his father’s family told me to go and call my son Adeyemi because they want to pick someone from his father’s lineage. They said he is the one they want. I now said haa. There are so many older men in their family. That they should leave him in the US where he was. They said No. One of the men in the family said no its Adeyemi they want. He already has his Photograph. That was how the process started.

I didn’t want them to pick him then. I wanted them to leave him alone where he was because they had so many brothers and nephews who lived here, then. They said No. He is the one they want. The Kingmakers ratified it. Family members supported. They rallied round him.

How do you see the position of Iya Oba?

I am happy. People respect that title. I took the title of Iya Abiye at Ayetoro years ago in the 1980s. I opened my maternity in 1984 August and the Oba gave me the title Iya Abiye. Government approved it.

Some people feel Kabiyesi is your favourite child. Is this true?

I love all the kids that God has given me. There is no one I don’t like in all my kids. But I have a special relationship with Adeyemi. When he was in the US in those days before he became Oba he will always call me, whether he has money or not to call. He will say Mama how are you? He was not a king then. When he became a king it continued. I came to live with him.

And he comes in here to my apartment regularly to see me. My decision to live in Joga was reached between him and his siblings. That is how I began to live in Joga Orile, my husband’s town.

In the last 80 years, what have you gone through in terms of experience, in terms of challenges?

I have seen a lot. Which one do you want me to say? Is it all the things I went through in my workplace or is it as a Teacher? Or what I went through as a Nurse, or as a wife or as a mother? Or is it in terms of bringing up my children?

The journey has been rough. I got transferred all over the place from one town to the other around this Egbado, Ilaro area.

All the maternity hospitals  I have worked grew big. Anywhere I got transferred to, grows big. I was supervising so many maternity clinics. I later became a Senior Midwife Assistant. There was so much envy then. I used to go on tour. When I set up my own, the Envy intensified.

I had an Ambulance which we used to publicise Immunisation. A lot of people used to come to my clinic. There was so much risk involved. The envy was so much.