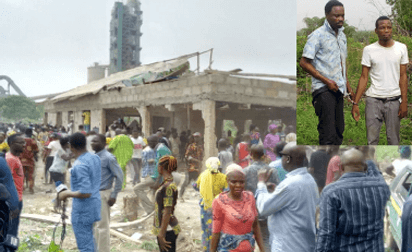 An acclaimed Pastor of the Holy Gathering Evangelical Church of God, Papalanto, Ewekoro Local Government Area of the state, Oluwatobiloba Ipense, has been arrested for allegedly killing his secret lover, Railat Sanni, for ritual purposes. Crowd at the church and the suspects (inset). The victim was a 35-year-old divorcee with five kids.

The Pastor, who claimed he was ordained at the West African college, Sango in 2011, was paraded alongside his accomplice, Daniel Sopeju, who also claimed to be a prophet in another church. The Ogun State Commissioner of Police, Ahmed Iliyasu, led newsmen yesterday to the crime scene, saying, the suspect beheaded the victim, severed the two hands and buried the decapitated body in his uncompleted church.

When the Commissioner of Police and his entourage, as well as newsmen, got to the scene at Papalanto, thousands of residents of the area bordering Lafarge Cement trooped out to catch a glance of the incident. Iliyasu, who supervised the exhumation of the decapitated body of the victim in the church located in the bush, said the suspect and his accomplice were arrested last week Monday. While explaining the process that led to the arrest of the suspects, the police boss said the command received a report of a missing person at its Divisional Headquarters in Ewekoro on Monday 26th March.

He said, “The case was reported by one Adebola Saheed that his younger sister, Raliat Sanni left home since 21st March and was yet to return. “On the strength of the report, our operatives at Ewekoro Division led by the Divisional Police Officer, OluwarotimiJeje, swung into action and embarked on technical intelligence investigation.” Iliyasu said the suspect was arrested following a discreet analysis of facts surrounding the disappearance of the victim, as he was the last person that had contact with her. According to Iliyasu, the suspect was a pastor in charge of Cherubim & Seraphim white garment church, Elebute area of Ewekoro.

He added that in the course of interrogation, the pastor confessed to the killing of the victim and burying her inside his church after removing her head and two hands for reasons only ‘’known to him and God.” He also mentioned one Pastor Daniel Sopeju of Iyana Egbado as his accomplice. Iliyasu claimed that the victim was a ‘secret lover’ to the pastor, who reportedly hacked her to death.

He, however, disclosed that forensic investigation into the case has commenced, adding that the case will eventually be charged to court. While speaking with newsmen, Ipense denied the allegation that he killed the victim, but said his accomplice, Sopeju, killed her. Ipense claimed that Sopeju led seven members of an occultic group to his house with the aim of luring him to become a member. Ipense who claimed to be teaching Accounting and Commerce at Methodist High School (Private),

Arigbajo, said, the group had earlier asked him to submit names of his church members from which he alleged they eventually picked Raliat. He said, “It was not true that I killed a woman, it was one Mr Sopeju Daniel and a woman that wanted to initiate me into their occultic group and they said that they are going to collect a ransom.

“So they collected the names of my members and picked the name of Raliat Sanni. Having mentioned her name, they asked me where she was living and I told them she was living in Wasimi. They later got her and brought her to my church.

“ Mr Sopeju brought out a knife and beheaded the woman and after beheading her, he collected her blood and put it in seven calabashes”. He further explained that the group told him that the severed head and hands would be shared by members of the occultic group. When asked about his reaction, Sopeju denied killing her, but, however, admitted that they all belonged to white garment churches in the area.

The elder brother of the deceased, Saheed Adegbola said Raliat left home on the 21st of March, 2018 and did not return. Adegbola said “ But on the 22nd of March, my mother came to meet her pastor to ask for her whereabouts, and the pastor told her if she sees Raliat, she will not know her again because she was owing him N200,000. “He claimed that she borrowed the money from him.

He even told my dad that they should go to Police station together to report, but my mother told him not to worry. “But on the 26th of March, I went to report the case to Police, and they gave me full support to look for my younger sister. “Since the day we have been looking for her, she has been appearing to me in my dream. On the 31st of March, I brought Policemen to this church to ransack everywhere.

When we got to the exact position she was buried, I told the Police that she was buried there because I was seeing her spirit. “She was a divorcee with five kids; she was a hairdresser, living in her house with her children in Waisimi. She was 35 years of age and 5th position in the family.”