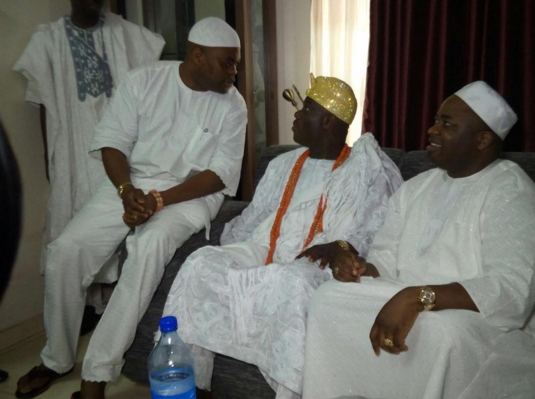 Have you wondered why Ooni of Ife, HRM Oba Enitan Adeyeye Ogunwusi and His Royal Highness, Oba Saheed Ademola Elegushi are that close? Have you even asked how and when they met and became best of friends?

Today, the only two traditional rulers in Nigeria who are age mates, wealthy and doing real estate business are no other than Ooni of Ife and Oba Saheed Elegushi of Ikateland. Apart from this, these two kings are fashionable, they love to dress and look great, especially with their white regalias and they always standout. These two kings have been friends for over 15 years ago.

Before we take you further, let’s tell you a bit about Ooni of Ife before he became an Oba.

Few years back, before he became Ooni, he was into importation of cement and iron rods, selling for Pacific Holdings, owned by Dr. Deji Adeleke and later developed love for real estate. His elder brother, Adetunji Ogunwusi was in the banking sector but his brother was also involved in the real estate business. He joined him and they both worked together.

Ooni has worked with many other Indian companies in the area of manufacturing but he loves real estate more, especially construction. He started real estate business around 1998/99 and that was when he set up his real estate company, Gran Imperio Group (GIG). And the company still functions and does business in real estate till today.

Around this period, when Ooni set up his company that was when he met his friend, Oba Elegushi, although neither of them had emerged kings then. Few years down the line, Oba Saheed Elegushi became an Oba in Ikate land, Lekki, Lagos. That was when their friendship began as a result of land transactions and construction businesses they transacted together.
Ooni is 43 years of age, while his friend is 42 and before he became an Oba in Ikateland, Oba Elegushi had worked in several places. He was Personal Assistant to former Governor of Lagos State, Asiwaju Bola Ahmed Tinubu between 2003 and 2007 and also became Senior Special Assistant to Governor Babatunde Fashola, SAN on Special Duties from June 2007 until his installation as the Oba Elegushi of Ikateland on the 27th of April, 2010.

All these experiences have earned him respect and have also helped him develop close relationship with Asiwaju. We heard that, when the present Ooni of Ife was vying for the post, Oba Elegushi contributed significantly to his emergence.
We can also tell you categorically that when Ooni got married two years ago, Oba Elegushi spent three days in Ife to support his friend.

Talk of Obas with class, style and prestige, give it to Ooni and Oba Elegushi. Their appearances are lovely and classy as Kings; Their presence at any party always adds glamour and class.
Two weeks ago, at Bisi Onasanya’s son’s wedding at Landmark Event Centre, Victoria Island, Lagos, they were both chatting with each other on several occasions.

Also, last year when Oba Elegushi’s wife, Sekinat Aramide celebrated her 40th birthday, Ooni was there throughout. At Governor Ajimobi of Oyo State son’s wedding in Ibadan, they were together as well, seated side by side.

There was even a time when the wife of Oba Elegushi, Oloori Sekinat met Ooni of Ife at a party where she tried to hug Kabiyeesi and his aides restricted her, but Ooni stopped them and he allowed her hug him. Also few months back at Oba Abiodun Oniru 80th birthday celebration (last year), Ooni of Ife was there; although he arrived late to the event but immediately he arrived the venue a seat was provided for him beside the celebrant but Oba Elegushi still walked up to his table; where they both chatted for many minutes.

A lot of people don’t know much about the past of Oba Elegushi of Ikateland; his educational background, his family lineage and his present status in Lagos.

Oba Saheed Ademola Elegushi (Kusenla III) is one of the youngest Obas in Lagos, he was born to the family of late Oba Yekini Adeniyi Elegushi, Elegushi royal family of Ikateland, Lagos State on the 10th of April, 1976.

He had his primary school education at the St. Mathias Primary School, Lagos between 1981 and 1987. He also had his secondary school education at the Methodist Boys’ High School, Lagos between 1988 and 1994 and went to Lagos State University, between the year 1995 and 2000 and bagged a Bachelor of Science degree in Economics where he graduated with a second class honourary degree. He also had his Master’s degree in Economics at the school (LASU) between 2002 and 2003.

The then Prince Saheed Ademola Elegushi also proceeded to the University of Manchester, Manchester Business School, United Kingdom and got a Masters degree in Public Administration between the year 2008 and 2010 before his emergence as the Oba Elegushi of Ikateland.

Oba Saheed Ademola has worked in many sectors and has many years of experience accumulated in various capacities as a distinguished professional, politician and a philanthropist. He is married to Oloori Sekinat Aramide and they are blessed with three kids.

How City People Was Born In November...