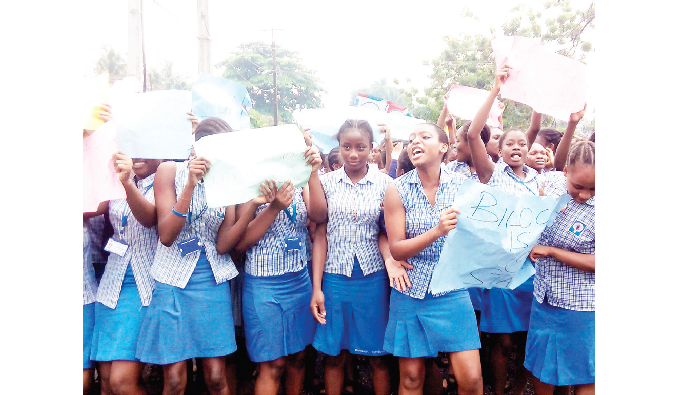 Parents of the prestigious Queens College, Lagos have vowed to protest any unfavourable condition of living for their children, according to an online report by Healthstyleplus Online.

The school had proposed March 19 resumption of students of from the month-long mid-term holiday.
The report said, the parents who were at the Children’s Emergency ward of the Lagos University Teaching Hospital, LUTH, to support parents of two of the critically ill students still on admission at the hospital, said: “The planned protest is still under wraps because some of us have been meeting and we have plans to unveil our displeasure should we find that by Sunday, March 19 when our children are expected to return to school, there are unresolved grey areas to guarantee healthy living for the girls.

One of the parents who demanded that his name be withheld expressed his displeasure at the manner government treated the allegations of “injection outbreak” in the school, saying: “We have been monitoring media reports on the issue and we are still surprised that till now, except for what we pick here and there from among parents, there has not been a public statement by either Federal Ministry of Education or even Lagos State Ministry of Health which we are told is investigating the problems in the school.”
In the meantime, the Lagos State government on Thursday said that the safety of students of Queens College, Yaba, Lagos, should be assured before the school is reopened, even as it confirmed that two students of the school died as a result of water-borne diseases.
The State Commissioner for Health, Dr. Jide Idris who disclosed this in Lagos while briefing the press on the outcome of the investigation into the deaths, advised that the school resumption should be delayed till appropriate measures are put in place to remove sources of contaminants causing ill health and deaths of students.
“We wish to advise that the school resumption be delayed till appropriate measures have been put in place for the safety of the students,” he noted, even as he recommended urgent need for water disinfection and sterilization of all water points in the school.
According to Idris, water samples from 16 sources in the school premises were collected and analysed at Drug Quality Control Laboratory of the Lagos State Ministry of Health at the Lagos State University Teaching Hospital, LASUTH, and the Microbiology Department of LUTH, Idi-Araba.
“The results from the two laboratories showed high bacteria content in the water samples from kitchen, behind dining hall and Queens Delight, the school water factory.
The bacteria range from coliforms, escherichia coli, salmonella, klebsiella ozoana and aeromonas hydrophila.”
He said a breakdown of the outbreak showed that available health records from the school’s sick bay indicated onset of illness was on 16th January 2017.
“The total number of students who presented at the clinic on account of abdominal pain, fever, vomiting and diarrhoea was 1,222 from the first date of presentation (11/1/17) to the last date of presentation (15/2/17).
There were four different peak periods of infection namely 31st January 2017, 2nd, 8th and 14th of February 2017. “Sixteen ill cases were admitted in various hospitals. Nine have been discharged, two died, while one is still on admission at the Intensive Care Unit of LASUTH, and three in LUTH.”